HONOLULU -- Those words. That voice. Young, yet powerful.

Haven't we heard this before? From Tiger Woods, perhaps? Arthur Ashe? Muhammad Ali? 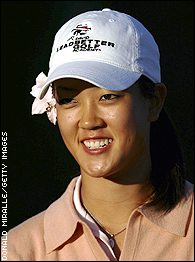 The desire, the determination, the ability to change the way we see the world. The great ones -- not just the great athletes, but the life-altering, mind-bending, difference makers who become part of our social consciousness through means of sport and stay there through means of conviction -- have it. That special something.

Michelle Wie has it.

Listen to the words. They resonate: "Stuff that no one ever thought of ... changed the world ... how people think ..." These are the words of a 15-year-old. Not just any 15-year-old, but a Hawaiian girl born to Korean parents. The individuality of globalization.

Her physical prowess is evident. A 6-foot frame which produces prodigious shots off the tee. A buttery-smooth putting stroke. A smile that lights an entire chain of islands. The other gifts are harder to see, intangible as they are.

Young girls flock to Michelle as they do retired soccer star Mia Hamm, but she does not speak to them; she speaks for them. Wie is the face, the voice of a generation that has not yet been heard. Through golf, now we must listen.

The comparisons to Woods are inevitable. Both are strong, sleek, talented golfers. American-born, yet clearly representative of other cultures. Tiger evolved from champion junior player to champion of causes to champion of carefully watching his words. The world's most recognizable athlete has such a tenuous following, his views are precariously perched in a place where they can do no damage.

Wie, on the other hand, is simply speaking her mind.

"I'm not here to make a statement," Wie said from the Sony Open, where she will compete against the best men in the world for the second straight year. "I'm just here to do stuff that no one has tried before. And it's fun. Just think outside the box. ... I never wanted to do ordinary things."

Let us hope that Wie's words are not simply those of youthful exuberance, a girl who does not yet know how far her voice reaches. She will act, and others -- her generation, other generations -- will follow. We should root for her, accept that she is still young, still finding herself. Still the future, still just a golfer.

And we must remember this, for it is the very reason we hear the voice. The future never comes if the physical attributes -- that gentle, relaxed golf swing -- doesn't lead us to it. We must nurture her, make sure she is everything she needs to be -- and everything we need her to be.

Michelle Wie is poised to lead us like the great ones before her. She's not there yet, but the future is catching up to the present every day.