HONOLULU -- Thursday was no ordinary day at the Punahou School.

Tensions ran high. Students milled about, unable to shake the nervous anticipation of the moment. There was only one thing on their thoughts and in their minds ...

Thursday was just another day in the extraordinary life of Michelle Wie. 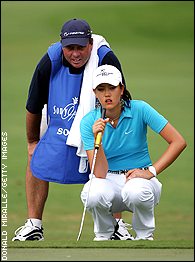 Looking calm and relaxed, only she could tell if there were butterflies in her stomach. Wie's second time playing in the Sony Open and, once again, all eyes and cameras were focused directly on her ...

The star of the show.

Students must pass strict entrance exams just to enroll at Punahou. Expectations from parents, teachers and, most of all, the students themselves are high. All children feel they must prove they belong academically.

"Everybody's stressing out, trying to get good grades, trying not to fail their classes," Brynne Auten, 14, said.

Wie qualified for the Sony just by being herself. Already a living legend in the Honolulu area, she received a sponsor's exemption into the tournament for the second straight year. That doesn't mean she felt any pressure to fit in.

On an overcast afternoon, students huddled throughout the tree-lined campus, discussing tests that were now completed and debating answers that remained unknown.

Doubt was still in their minds -- Did I ace the test? Will it help me get into college? -- but smiles adorned their young faces.

On a sporadically rainy morning, Wie maneuvered through the course at Waialae Country Club, constantly battling the Kona winds that tried to knock her ball off the path of its intended flight.

The questions were everywhere -- Will she make the cut? How many of the pros will she beat this year? -- but only Michelle had the answers. After all, earlier in the week she told her father, B.J., that making the cut wasn't enough; she wanted a top 20 finish.

Distracted by schoolwork, hardly any students took notice of their most famous peer taking part in a men's professional tournament on the very same day.

"I heard she's playing in some tournament this week," Anthony Chun, 17, said.
You can excuse Anthony if Advanced Placement exams in chemistry and calculus deterred his ability to follow a classmate around the golf course.

So busy playing practice rounds and pro-ams and giving interviews and, well, being the face of the next generation of superstar golfers, Wie has barely had time to think about her Punahou School during the week.

"Well, this week is semester exam week, so I'm missing all of the studying, cramming, all that. It's quite nice, actually," she said on Tuesday.

You can excuse Michelle if she doesn't exactly miss all of that studying and cramming.

That's not to say they don't envy the girl everyone thinks already has it made.

"She's already got her whole life mapped out for her," Chad Hospodar, 17, said. "I wish I was that good at something."

And why should she? Fraternizing with two-time defending champion Ernie Els during the week, Wie got some lessons from a player who already has it made.

"I learned a lot of things from him," she said. "I try to take some of his knowledge and his feel for the game. ... I learn just by looking at him."

What most of the Punahou students don't realize is that their lives aren't much different from that of their famous classmate. Each faced important tests this week. Some went well; others could use improvement.

But they're young. There's still plenty of time to correct those mistakes.

After all, they won't be judged on tests they took as teens for the rest of their lives.

What Wie may not realize is that playing on the PGA Tour isn't much different that taking exams at school. She'll be graded on everything from etiquette to demeanor to, of course, her score. On that test, she scored a 75.

But she's young. She still has plenty of time to correct those mistakes.

After all, she won't be judged on a test she took as a teen for the rest of her life.