HONOLULU -- It's back to school for Michelle Wie. 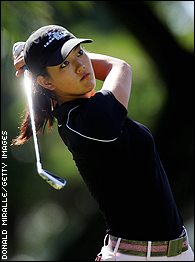 The 15-year-old high school sophomore never had a chance to make the cut
Friday in the Sony Open, taking three putts from 8 feet for a
triple bogey on her sixth hole and losing more ground from there.
She shot a 4-over 74 to finish 17 shots behind Shigeki Maruyama,
and seven shots below the cut line.

"I think I tried too hard," Wie said. "After missing the cut
by one last year, I think I took for granted that I was going to
play better. Last year, everything went too easily."

Most girls her age don't mind having a weekend off. Wie had
grandiose plans.

She was trying to become the first female in 60 years to make
the cut on the PGA Tour, and had high hopes after missing by one
shot last year. If everything went perfect, she thought she could
finish in the top 20.

Wie had to settle for a tie with European Ryder Cup player Paul Casey at 9-over 149. She wound up tied for 128th place, still
better than 14 other men.

Her mother brushed dried streaks of tears from her cheeks, and a
box of tissue was at her feet after two emotionally draining days
on the PGA Tour.

"I'm going for some retail therapy," Wie said, a teenager's
term for shopping.

Maruyama holed a bunker shot for eagle on the par-5 ninth for a
65, giving him a one-shot lead over Justin Rose and Brett Quigley
going into a weekend at Waialae Country Club that will be missing
its biggest star.

Another huge gallery had little reason to cheer.

Wie picked up her first birdie with an 8-foot putt on the 10th
hole, but by then it was too late. There was no drama like last
year, when she birdied two of her last three holes for a 68 to miss
the cut by one shot.

Her lengthy stride gave way to slumped shoulders, and Wie stared
at the turf after each shot missed the green.

The only consolation was her finish.

She hit a wedge into 10 feet and holed the putt for birdie, then
walked off the 18th green with a rare smile.

ESPN, which stayed with her until the conclusion of her round
last year, this time switched to an NBA game after Wie made her
third bogey in four holes at the par-4 16th.

Wie goes back to the Punahou School, but not for long. She will
return to the professional ranks next month on the LPGA Tour for the
SBS Open across the island at Turtle Bay, then play twice more on
the LPGA before spring break.

As for next year?

"I want another chance because I know I can do better than
this," Wie said.

Two-time defending champion Ernie Els believes Wie should get
another sponsor's exemption to the Sony Open.

"That is not throwing an invite away," he said. "It's
phenomenal what she is doing for the game."

Maruyama made it look easy, jumping into contention by playing a
three-hole stretch around the turn in 4 under par -- an 8-iron to 3
feet on the eighth, holing the bunker shot for eagle on the par-5
ninth, and making a 20-foot birdie on the 10th. He held it together
the rest of the way and was at 8-under 132.

"I was worried about my game, first tournament of the year,"
he said. "I'm not nervous now."

Quigley (67) was tied for the lead until missing the green on
No. 16 for a bogey. Rose holed out from a bunker on the brutal
first hole for birdie, but gave that shot away by missing the par-5
ninth with a 7-iron and settling for par. Still, the 24-year-old
Englishman will be in the last group Saturday.

And the tournament still has some familiar faces.

Past champions Paul Azinger and Jeff Sluman, each with 68, were
in the large group at 5-under 135 that included Ryder Cup captain
Tom Lehman (68) and Stewart Cink (69).

Other familiar faces included Vijay Singh, the No. 1 player who
salvaged a suspect round with a 30-foot eagle putt on his last hole
for a 68, putting him five shots off the lead. Els hit the ball
close all day and had to settle for a 67, leaving him another shot
behind.

Other familiar faces had some wrinkles, as all four Champions
Tour players made the cut -- Peter Jacobsen, Craig Stadler, Tom Kite
and Dick Mast, who qualified Monday and shot 64, leaving him six
shots behind.

Adam Scott shot 65 to move into contention at 4-under 136. It
also put him well ahead of a certain 15-year-old.

No one got ridiculed quite like Scott a year ago. His swing
coach, Butch Harmon, routinely plastered photos of Wie inside of
his locker the rest of the year.

Does he expected a call from Harmon?

"He should be congratulating me, really," Scott said. "The
amount of (stuff) he gave me last year, I'd be disappointed if he
didn't. I've squared it up, 1-1."

Wie was hopeful of not going 0-for-2 on the PGA Tour, although
she put herself in a tough spot by making only one birdie in the
first-round 75. She needed a 67 to make the cut, but never came
close.

Wie hung in nicely, saving par on four of the first five holes
with a collection of good chips and putts.

But it all came undone on No. 6 when she missed her first
fairway of the second round, into the right rough and blocked
slightly by tall, skinny palms.

First, she tried to play a low hook around the trees and never
got back to the short grass. Her wedge with a third shot came up
just short, and she had to chip over a knoll. Needing an 8-footer
to make bogey, she ran the putt some 4 feet by, then lipped out to
take 7.

Wie stared blankly, and the shock was evident.

After missing good birdies chances on the next three holes, she
made the turn at 8 over par, in a tie for 125th. After her birdie
on the 10th, she started missing greens and the par putts got
longer.

"The shoes get heavier and your confidence goes down," Wie
said. "When I made a couple of bogeys, that's when you know it's
not your day."