WAILEA, Hawaii -- Jack Nicklaus was "shocked" by his
performance in the Champions Skins Game. His opponents weren't even
surprised.

Returning from a long layoff following back surgery, Nicklaus
won 11 straight skins and a career-high $340,000 on Saturday in a
runaway victory over Craig Stadler. 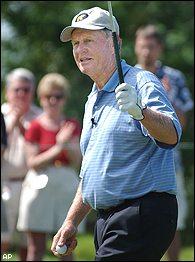 "I'm totally shocked. I have no way to explain it," said
Nicklaus, who boosted his career Champion Skins Game records to
$2,005,000 and 78 skins.

Nicklaus, who turned 65 last month and hadn't played a
competitive round of golf since June 2004, rode on the back of a
cart for much of the round because of a strained hamstring. He had
back surgery on Nov. 23.

"He moans and complains about the hips, back, legs, everything
and then he kind of lulls you to sleep and then he makes four
birdies in a row," Stadler said. "I'm not surprised by anything
he does."

Stadler, the 2004 Champions Tour player of the year, was second
with five skins and $180,000 in his first appearance in the event.
Defending champion Tom Watson earned $80,000 for his two late
skins, and Arnold Palmer was blanked for the third time in four
years.

"I was very pleased with the way I played," he said. "I
certainly don't have any power yet. I've just got to get my legs
back."

Nicklaus said his goal is to play in the Masters and the British
Open this year, but doesn't know if he'll be ready for Augusta.

The 51-year-old Stadler, the youngest in the group, set the pace
early by outdriving his competition. He birdied three of the first
four holes to take four skins and $80,000. With four skins and
$100,000 on the line on the par-3 eighth, Stadler had a chance to
expand his lead but missed his 6-foot birdie attempt an inch to the
left.

Nicklaus halved the hole by two-putting from 18 feet to begin
his run.

Stadler said being the youngest isn't really an advantage.

"All the pressure goes on the young guys here," he said. "You
come in at 51, you got all the pressure of being the so-called
favorite in the event and then the 60 year old goes and steals all
your cash.

"Where was the 60 year old?" Nicklaus asked.

Nicklaus got on the board with an 8-foot birdie putt on the
353-yard ninth to pick up five skins and $130,000 as the
sunsplashed gallery roared.

Stadler, who won five events on the Champions Tour last year,
has already been busy this year. He tied for seventh in the
MasterCard Championships and played two events on the PGA Tour. He
tied for ninth in the Sony Open and tied for 14th last weekend in
the Bob Hope Chrysler Classic.

He said playing with three Hall of Famers can't be beat.

"I would say this week you had three legends and myself. I
don't quite consider myself a legend," he said. "It's great to be
with these three guys. I would play with Arnold every day of the
week if I had the chance. I just love playing with him, being
around him."

"Nothing surprises me about Jack," Watson said. "Yesterday,
he was hitting the ball terribly. Today, he was in a better
position and it was the Jack of old."

Palmer, 75, was the shortest off the tees and just missed
several birdie attempts through the day.

Conditions at the Wailea Golf Club's Gold Course were balmy with
the slightest of ocean breezes. The scenic layout runs along the
base of the dormant volcano Haleakala and features views of the
Pacific Ocean.

The players took a 20-minute break after the ninth hole to
change shirts, to make it appear they were playing on two different
days for television.