PEBBLE BEACH, Calif. -- Phil Mickelson should be used to
this now, but he felt a strange sensation as he walked up the 18th
fairway Sunday afternoon at Pebble Beach with a four-shot lead. 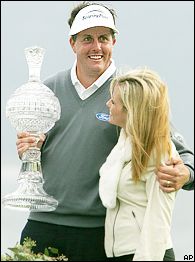 His heart wasn't racing from the thrill of competition.
He didn't need a dramatic shot, good or bad, that people would
talk about for years. Heck, he could have pumped two balls into the
Pacific Ocean and still won the Pebble Beach National Pro-Am.
What now?
"Bones and I actually had a little tiff," Mickelson said,
referring to his caddie. "I wanted to hit driver."
Then he smiled, ending the only suspense of the day.
"No, I'm just kidding," he added.
The joke again was on the guys trying to catch him.
Mickelson became the only wire-to-wire winner in the 68-year
history of the tournament, never letting anyone get closer than
four shots and closing with a 1-over 73 for his second straight
dominant victory on the PGA Tour.
He won by five shots last week in Phoenix, the largest margin of
his career. He led by seven shots at the start of a cool, damp
final round at Pebble Beach and never had to sweat.
"It was weird," he said. "I didn't feel the normal intensity,
the normal stress. It was a very enjoyable round."
The only thing he didn't do was set the tournament scoring
record. Mickelson finished at 19-under 269, missing by one shot the
72-hole record set seven years by Mark O'Meara.
"I don't really think about records like that," Mickelson
said. "I just wanted to win the tournament."
Mike Weir tried to keep it interesting, but that only lasted
about five minutes. The Canadian had the best round of the day, a
5-under 67, and got within four shots after a birdie on No. 11.
Mickelson was coming off back-to-back bogeys on the ninth and
10th holes, the toughest at Pebble because of wind that blew light
rain into his face. But he hit wedge into 18 feet on the 11th to
restore his lead to five shots, and won going away despite missing
six birdie putts inside 18 feet the rest of the way.
Weir also burned the edge of the cup on the next six holes, and
his chip for eagle on the 18th just turned away.
"I played one of the better rounds I've ever played," Weir
said. "It could have been a really special round if a few things
could have dropped for me."
Mickelson won in consecutive weeks for the first time in his
career. Even more alarming is the margin of victory, especially for
a guy known for keeping it entertaining to the very end.
He has won the last two weeks by a combined nine shots. Going
into this year, Mickelson had won his last eight PGA Tour titles by
a combined nine shots.
"It's been fun," Mickelson said. "I've been playing well the
last couple of weeks. I'm excited to get the year started with a
couple of wins."
Mickelson won for the 25th time on the PGA Tour. His $954,000
check pushed him over $2 million for the year and put him atop the
money list. He will take the Nissan Open off next week, then head
to La Costa for the Match Play Championship.
"Obviously, he's doing something right," Weir said.
Greg Owen of England, a PGA Tour rookie playing in the final
group with Mickelson, birdied the last hole for a 72 and finished
third to earn $360,000. Paul Goydos and Tim Clark each shot 71 to
finish another shot back. For Goydos, it was his highest finish in
six years.
Only 14 players managed to break par at Pebble Beach, where
sunny conditions gave way to a light rain that blew sideways and
put some of the teeth back into the venerable cliffside course.
Weir was the only player in the 60s.
Mickelson had a seven-shot lead at the start of his round, and
his plan was to play it smart without being defensive. But it was
clear from the start he wanted to stick to his routine by attacking
flags when he could.
Ignoring the fat of the green at No. 1, Mickelson hit a low draw
that just cleared the bunker and stopped 15 feet away on the short
side of the pin for a two-putt par. On the par-3 fifth, he took his
4-iron over a section of the Stillwater Cove before letting the
wind bring it back to the green.
At one point, Mickelson had a nine-shot lead. Six holes later,
the lead was down to four as Weir, who has finished in the top four
the last three years at Pebble, mounted a never-say-die charge.
First came a nifty chip from left of the eighth green to save
par. Then, Weir hit a 3-wood that just cleared the front bunker and
stopped 6 feet away from the only birdies on the 430-yard ninth.
After saving par with another great pitch on No. 10, Weir stuffed
his approach 10 feet behind the hole at No. 11 to get to 14 under.
Mickelson answered with his birdie putt on the 11th. Despite
missing putts from 6, 4 and 8 feet on the next three holes, Weir
ran out of holes and Mickelson could relax.
There was no drama at Pebble, and Mickelson had no complaints.

Joel Kribel and Barry McCollam won the pro-am portion of
the tournament at 35 under par. Former U.S. Open champion Scott
Simpson and his longtime partner, Bill Murray, finished fourth. ...
Mickelson played so well the first three rounds that he would have
made the cut in the pro-am on his own ball. ... Mickelson is now
tied for 21st on the all-time victory list with Tommy Armour,
Johnny Miller and Vijay Singh. Miller also won his 25th victory at
Pebble Beach in 1994.