MIAMI -- Phil Mickelson heard the roars of a dynamic charge
ahead of him. Every time he glanced at the leaderboard, he noticed
Tiger Woods taking another shot off his lead until it was down to
two Saturday in the Ford Championship at Doral.

Lefty was loving it. 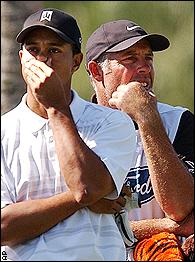 "I had a different feeling today,'' Mickelson said after his
6-under 66. "I wanted him to play well. I want to go head-to-head
with him. I've been looking forward to the chance to play
head-to-head against him. If I'm able to turn things around from
the past and come out on top, it will make for a very special
week.''

Doral could not have asked for a better duel.

Mickelson continued to bully the Blue Monster with a variety of
wedge shots from thick rough that gave him birdie chances, and left
him at 20-under 196 and in the lead for the 10th consecutive round
in stroke play.

Woods energized the monstrous gallery with his power, driving
the green on the 347-yard 16th hole and making good on a birthday
pledge to his father to shoot a low round. His 8-foot birdie on the
final hole gave him a 9-under 63, the low score of the tournament,
and put him two shots behind.

"We're going to have a bunch of fun tomorrow,'' Woods said.
"It's going to be competitive, and I think we're both going to be
focused on making a bunch of birdies.''

The gallery might not realize this, but there were other players
with an outside chance at Doral.

Zach Johnson, who had to pull out of the pro-am with a bad back,
shot a 64 and was six shots behind at 14 under, along with James
Driscoll (67) and defending champion Craig Parry (67).

But all that mattered to anyone were two of the biggest names in
golf -- Phil and Tiger.

They last played in the final group at the 2003 Buick
Invitational, after Lefty had made his infamous "inferior
equipment'' comment. Woods went on to win by four, with Mickelson
six shots behind.

Mickelson repeatedly said his record was not so stellar against
Woods, although he usually is having to make up ground. He is one
of three players on the PGA Tour to beat him from behind, at the
2000 Tour Championship.

Lefty was plenty loose as he considered a Sunday showdown
against a player he described as "tough,'' and someone who when
"just a fraction off of his best is still better than just about
anybody in the game.''

While it looks like a two-man race on Sunday, Mickelson
cautioned not to forget about the rest of the field.

"We want to make sure that we don't let them back in the
tournament,'' he said. "Because if we play anything like we did at
the Ryder Cup together, that is a very real possibility.''

The Ryder Cup is one reason Sunday is so compelling. Longtime
rivals, they were paired for two matches at Oakland Hills last
September, and it was awkward. Woods and Mickelson rarely spoke and
wound up losing both matches.

How much conversation will there be Sunday?

"Probably a little bit,'' Mickelson said. "At least on the
front nine.''

"Hey, we're competitors,'' Woods said. "We're going to just
try to make a bunch of birdies and see what happens.''

But Lefty has a big advantage Sunday. Not only does he have a
two-shot cushion, he is playing the best golf of anyone on the PGA
Tour. Mickelson won by five shots in Phoenix and went wire-to-wire
at Pebble Beach to win by five.

This dream pairing was set up on the back nine.

Woods had six birdies, finishing his round with an 8-footer on
the 18th and a message for his father, Earl, who turned 73 on
Saturday.

"Happy birthday, dad. I told you I would shoot a low one for
you, and I did,'' Woods said to NBC Sports.

It was one of the most energetic days at Doral since Greg Norman
was in his prime -- blue sky, warm sunshine and a leaderboard packed
with the best players in golf.

Fans stood six-deep around the putting green when Woods and
Mickelson were warming up, and the first fairway was lined with
fans from tee-to-green on both sides when Woods started his third
round. One boy injured his arm when he fell from a tree trying to
get a glimpse of the action.

And there was plenty of action.

Mickelson was magical with his wedges, and he had to be. He hit
only four fairways, but drove it long enough that he still managed
to set up six birdies. He bagged three in a row on the front nine,
and looked as though he might turn another tournament into a
runaway.

"It's fun to watch if you're a spectator,'' Johnson said.
"Kind of stinks if you're part of it.''

Woods became a big part of it with tremendous shots along the
back nine.

He hammered his new 3-wood some 270 yards just over the flag on
the par-5 10th, setting up an easy up-and-down for birdie from just
off the green. With another big 3-wood, this one from 262 yards
into a stiff breeze, Woods became the first player all week to
reach the 603-yard 12th hole in two for another birdie.

Then came the 16th, where the tees were moved up 25 yards to
tempt players to drive the green. Woods didn't realize he reached
the green until he was halfway up the fairway.

"No one clapped,'' Woods said. "We didn't have any clue. I
just knew I hit it in the direction of the green.''

After Woods got within one shot with his birdie on the 18th,
Mickelson hit another beautiful wedge from the rough the 16th and
holed a 6-footer for birdie.

The Ford Championship was thrilled by getting one of the best
fields of the year.

Now it gets a duel most tournaments can only dream of having.