SUPERSTITION MOUNTAIN, Ariz. -- Annika Sorenstam has rallied
to win in the final round 19 times. 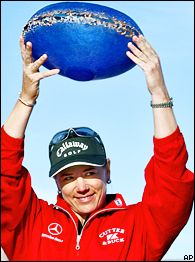 She just couldn't recall many in more dramatic fashion than her
repeat victory in the Safeway International on Sunday.

Sorenstam nailed a 4-wood second shot onto the green on the
par-5 18th hole Sunday, made up the final shot of her comeback and
forced a playoff with her birdie putt, then beat Lorena Ochoa with
a par on the first extra hole.

"This is in the top three, for sure," said Sorenstam, who won
her fourth straight LPGA Tour start. "Again, carrying 217 (yards),
with the wind here, it was on the edge. I had to take a chance, I
really did, and I think it just carried by inches."

Sorenstam made up four strokes in the last three holes and
improved to 14-5 in playoffs. Ochoa was in her first playoff.

The victory -- Sorenstam's career 58th -- was her second in two
tournaments this year and the sixth in her last eight.

Liselotte Neumann (71) and Rosie Jones (72) were a shot back,
with Michele Redman seventh at 6 under after an impressive 67 on a
blustery day.

Hawaii's Michelle Wie shot a 71 to tie for 12th. Also in her
group at 4 under were Jennifer Rosales (70), the winner in Hawaii
last month, and Siew-Ai Lim (74), who shared the first-round lead
with Ochoa.

Sorenstam, the four-time LPGA player of the year and scoring
record-setter, won her season debut in Mexico City two weeks ago,
dashing the 23-year-old Ochoa's dream of a victory in her native
land. It was more of the same this time, but with a twist.

Ochoa overcame three bogeys in the first six holes with three
birdies in four holes midway through the round and was 14 under to
Sorenstam's 10 under after birdieing the 15th hole.

But it was a train wreck after that for the rising Mexican star,
who won twice last year and had 16 other top-10 finishes, winding
up third on the money list behind Sorenstam and Grace Park.

"I saw Lorena climbing the leaderboard with more and more
birdies, and I was trying really hard, but I couldn't make any
birdies," Sorenstam said. "And it wasn't until the 16th that I
heard that she double-bogeyed, and then 18, I realized, 'There's a
big chance here."

Ochoa double-bogeyed the 16th hole for the second time in two
days and two-putted from 7 feet for a bogey on the 17th.

She said she didn't fear No. 16, a 412-yard par 4, despite
having lost three shots to par there in three previous rounds. But
she drove into a fairway bunker, barely got her sand wedge over a
transition area and three-putted from 15 feet.

"Even when I was putting for par, I just thought, 'Make two
putts and let's get out of here," Ochoa said. "I wasn't even
trying to make the putt too hard. But, I guess, too much adrenaline
and just, you know, everything happened so quick."

Sorenstam took advantage, lofting her 4-wood within 22 feet, and
two-putted for the tap-in birdie. Ochoa, playing in the last group
with Kang, had the green to herself because Kang dunked an eagle on
the fly to improve her paycheck.

Ochoa lined up an 8-footer for birdie while Sorenstam watched,
but just missed, and both went back to the 18th tee for the
playoff.

Ochoa put her tee shot in a long, narrow lake on the Prospector
Course's only water hole, and the conclusion was never in doubt
from there. Sorenstam was pin-high with her second shot again, sent
a 25-yard chip across the green to within 7 feet and two-putted for
par.

Ochoa didn't even putt after her attempt to save par with a chip
from short grass left of the cup went 5 feet past, conceding
Sorenstam's victory.

"I'm pretty upset, but I'm going to try not to be too hard on
myself," Ochoa said. "I'm going to try to learn from this. You
know, Annika is the best player in the world, and hopefully I come
back next week."

Sorenstam was 18 under last year.