RANCHO MIRAGE, Calif. -- It might be time for Annika Sorenstam to reassess her goals for the season. She wants to win all four major championships, but perhaps a better goal might be to win every tournament she plays in. 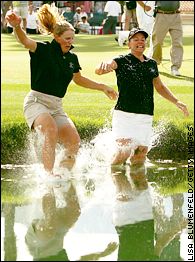 The way Sorenstam is playing these days, anything seems possible.

The most dominant player in golf remained unbeaten on the season Sunday, and she made a statement while doing it. Sorenstam turned a runaway into a blowout, shooting a final-round 68 to win the Nabisco Championship by eight shots and extend her LPGA Tour winning streak to five.

Sorenstam had reason to celebrate, and celebrate she did. She was doused in champagne after sinking her putt on the final hole before taking the traditional winner's plunge into the pond next to the 18th green along with sister Charlotta and mother Gunilla.

"I'm going to remember this Easter weekend for a long time," Sorenstam said.

So will golf fans, who witnessed the best player of her generation -- perhaps the best ever -- turn the first major championship of the year into a romp with a weekend that included 10 birdies and no bogeys over the final 36 holes.

Sorenstam was so dominating that fellow competitors could only marvel at the new heights her game is reaching.

"It only shows that she's that much better than the rest of us," defending champion Grace Park said.

The win was Sorenstam's fifth in a row over two seasons, tying a record set by Nancy Lopez in 1978. It also was the 59th LPGA Tour victory of her career -- a number Sorenstam is very familiar with -- and her eighth major championship win.

Lopez didn't even bother to compare her with other players on the LPGA Tour. She aimed a little higher.

"I think really and truly she's better than Tiger Woods," Lopez said. "We have a lot of great players out here and nobody is even coming close to her."

Sorenstam stumbled last year after saying she wanted to win all four majors and only won one. But she has one down now and is playing the best golf of her remarkable career.

"This is a long year and who knows what will happen," Sorenstam said. "But it's a good start."

Sorenstam began the weekend tied for the lead and then shot rounds of 66 and 68 to leave the rest of the field far behind. She had a five-shot lead beginning the day and wasted no time in turning it to eight shots with birdies on three of her first five holes.

Sorenstam was impressive with both her driver and her short game. She was the longest hitter in the tournament, consistently hitting the ball 50 to 60 yards past her playing partners, and made almost every putt under 10 feet when it counted.

The final nine was more of a victory lap than anything, as Sorenstam took in the cheers of the crowd on her way to certain victory.

She finished 15-under, eight shots ahead of Rosie Jones and 10 ahead of the next two challengers, Laura Diaz and Cristie Kerr.

"Somebody said, 'You didn't make it exciting,'" she said. "But for me it was exciting."

Sorenstam's win was not only her fifth in a row over two seasons but her seventh in her last nine tournaments. She hasn't shot a round over par since last June 27 in the Rochester LPGA, where she had a 1-over 73.

Since then, Sorenstam has played 43 rounds at par and better. Even worse for those playing against her, she believes the best is still ahead.

"I feel like I'm starting to reach my peak," Sorenstam said. "And I want to get there."

Jones finished with a pair of 71s in the final two rounds after being tied for the lead going into the third round. She also got a close-up look at the best player in women's golf.

"She didn't show any nerves at all," Jones said. "Her ball striking was just great."

Sorenstam didn't make a bogey all weekend, playing methodically as she made her way around a 6,535-yard course that was supposed to play tough with narrow fairways and deeper than normal rough.

Just for fun, Sorenstam capped her command performance by going for the green in two on the 485-yard final hole. Her 4-wood safely cleared the water, and Sorenstam took a victory lap on her way to the green, exchanging high-fives with spectators as she walked past the grandstands.

She promptly three-putted from about 100 feet, but it was of little consequence. When she tapped in for the win, her sister and a few others raced on the green and sprayed her with champagne.

Michelle Wie finished outside the top 10 for the first time in three years in the Nabisco, shooting a 71 to finish at even par, 15 shots back. That was two shots better than fellow teen Morgan Pressel.

"It was a really strange week," Wie said. "For some reason I couldn't shoot low, and I really couldn't pinpoint what was wrong."