LONDON -- Jack Nicklaus said Monday the British Open at St. Andrews in July will mark the end of his tournament career. 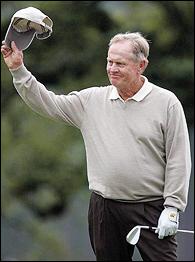 Nicklaus, 65, will be playing the British Open for the last time. He hasn't played in the Open since 2000 at St. Andrews.

The Royal & Ancient Golf Club moved up St. Andrews in the rotation to give Nicklaus one last chance to play on his favorite links. His son, Steve, will caddie for him at the July 14-17 major.

"From a tournament standpoint that will be it for me," Nicklaus said during a promotional appearance in Britain. "I will play a few skins games and father-sons, but from any kind of tournament involvement, that's it.

Nicklaus played his last Masters in April, missing the cut by five strokes. On his last hole, he brushed away tears and hugged his oldest son, Jackie.

"I expect I'll be just as emotional at St. Andrews," Nicklaus said. "I'm a sentimental old fool. I enjoy being part of history and what's going on, but I don't consider myself competitive any more.

"Hopefully when I get to St. Andrews I will have some kind of game. It won't be great, but I hope not to embarrass myself. I will enjoy it."

Nicklaus came to England to promote a golf and property development in Spain.