So did Ernie Els. Although he, we can safely assume, was the only one talking about golf. 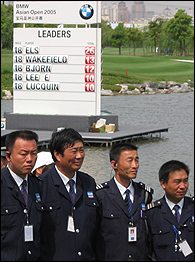 "The game in Asia is going to start taking off now  it's just a matter of time," Els said during the BMW Asian Open in Shanghai. "You have a really great Chinese player come through and it's really going to take off. The future of the game is coming this way, and I don't think there is anything stopping it. If there are more tournaments in Asia, so be it. I'll probably play more here every year, because I believe this is the way the game is going."

Take a look at the 2005 European Tour schedule and the shift eastward is clear. The Asian Open was the last of five tour stops in mainland China and Hong Kong this year. That means China has more Euro Tour events this season than both Scotland (four) and England (three). Since 1998, the European Tour has either joint- or tri-sanctioned 31 tournaments in Asia, including nine this year.

"It's been phenomenal, the growth in the last couple of years," said David Parkin, director of tour operations for the Asian Tour, which co-sanctioned the tournament in Shanghai. "It's come on the back end of an economic revival and certainly an awareness in Asia of golf as a medium to get your brand out. Inevitably, the last three or four years a lot of people have started (playing) golf. There is huge interest in golf at the moment in Asia, and it's fantastic."

There are approximately 1,650 golf courses in Asia today  not including Japan, which has 2,200  according to the latest figures from Singapore-based Asian Golf Monthly magazine. That number is more than double what it was 15 years ago. The magazine said the number of golfers in Asia has tripled to more than 5 million during the same period, and that figure is expected to increase at a 20 percent clip every year for the foreseeable future.

"Like the buildings around here, everything is happening very rapidly," Nick Faldo said in Shanghai, pointing to the apartment high-rises that shoot up like weeds around Tomson Golf Club, site of the Asian Open. "Asia was, well, I don't even know how you would describe where it was. But now it's a big impact. That's the bottom line. I think with the European Tour being involved co-sanctioning events, and bigger sponsors coming here more often, I think for the modern generation, the youngsters, this is going to be their tour. Asia and Pan-Asia is going to be their tour for the next 20 years."

Not surprisingly, most observers expect China to be at the center of golf's Asian boom. In some ways, it already is. There are 26 events on the Asian Tour schedule this season. China and its territories are playing host to 11 of them. Perhaps more telling, however, is the way the tour's prize money is distributed. China is home to half of it. Every multinational company wants its part of the world's fastest growing economy, and sponsoring a professional golf event in China, with a global television audience, is a nice way to announce your arrival.

"In China, six years back, I came here and there was just one good course," said India's Jyoti Randhawa, the third-ranked player on the Asian Tour. "I was like, 'They play golf in China?' Now there are 170 golf courses here. That speaks volumes for golf in Asia."

Forgive Randhawa if his figures are slightly off  courses have been popping up in China with so much speed, the progress is hard to keep track of. Latest estimates put the number of completed courses in mainland China at about 220. Not bad for a country that didn't even have one until 1984. But although estimates of courses currently in the works range from a couple dozen to 1,000, the official number is zero. The Chinese government has issued a moratorium on new construction.

Why? First, there are land issues. China is a nation of farmers  hundreds of millions of them, in fact  with a very limited amount of arable land. Then there's this other little problem: No one in China golfs. Despite the recent boom in other Asian countries, golf as a recreational sport is behind the curve in China. As a result, many courses failed to bring in the money they promised.

"It's still a very elitist sport," Asian Golf Monthly publisher Spencer Robinson explained. "Our estimate is that there are certainly no more than a couple of hundred thousand people in China playing golf, and a lot of those are expatriates. Clearly what needs to happen is the development of public golf courses. At the moment, all the golf courses there are private. Once you get public golf courses where the game is affordable and accessible, that is when it will really develop. But I think you're looking at another generation or so."

And thus China's current generation is left with this reality: The country is home to more million-dollar golf tournaments than international-caliber professional golfers. Forty-year-old Zhang Lian Wei, China's self-taught standard-bearer, explained why in an emotional post-round press conference at the Asian Open. Criticizing his government and Chinese companies for not supporting his historic career, Zhang said he has never received state funding and he has no domestic sponsors.

"It's such an ordeal playing golf in China over the years," said Zhang, the first Chinese golfer to win a European Tour event and to play in the Masters. "It's tough, it's difficult and it's lonely. I know golf is not an Olympic sport, but I think the sports authorities should at least have shown some kind of support, like air tickets or something, to show their appreciation of my contributions to Chinese golf."

Perhaps Zhang's struggles will blaze the trail for a new wave of Chinese golfers. Perhaps one of them will hit the big time and Chinese golf will, as Els predicts, really "take off."

If so, Els thinks he might know who that young golfer will be. His name is Mu Hu, a teenager who trains at David Leadbetter's golf academy in Florida.

"He looks unbelievable," Els said. "I've only seen pictures of him at David's studio in Orlando. But he looks like he could be a real player. And that's what you need. If you get somebody that breaks through on the world stage, this whole country will just ignite."

But even if it doesn't, China's golf tournaments will continue to grow as long as its economy does. This November, Shanghai is expected to play host to a tournament open only to winners from every major tour except the United States. That means Tiger Woods, winner of the Dunlop Phoenix in Japan last November, would be eligible. Published reports estimate the purse for this tournament will be between $4 and $5 million. There is also speculation that the U.S. PGA Tour's 2006 World Cup will be held in China.

Thanks in large part to China's rise, Asia may soon be on par with Europe in terms of prize money, according to the Asian Tour's Parkin.

It is China's century, after all.

Dan Washburn is a Shanghai-based writer. Visit him online at http://www.shanghaidiaries.com.