CHERRY HILLS VILLAGE, Colo.  The problem with perfection is that it is usually appreciated only after the fact. Sometimes feats can be performed so well  with such precision  that the accomplishment is made to look too easy. 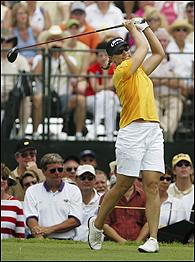 Tiger Woods spoiled us all in 2000 when he won nine PGA Tour events, including three major championships. He did it with such ease the assumption was that he would be that dominant every year. Time has shown, however, that it was more special than merely routine greatness  it was a transcendent year, a singular season of stunning success best appreciated from afar. Such is the case now with Annika Sorenstam. Quietly  almost too perfectly  she has put together the kind of season people will look back on decades from now and shake their heads and say, "Are you kidding me?"

Early this year, one of the young stars-in-waiting with designs on Sorenstam's label as best in the world said: "She's a great player, but she's on a bit of a hot streak right now." When that comment was relayed to another player, the second player said: "Yeah, she's on a hot streak. It's called her career." The numbers are absolutely startling. Forget the six wins in eight tournaments this year, including being halfway to her goal of the Grand Slam. In 236 LPGA events in her career, Sorenstam has won 62 times and finished second on 39 other occasions  101 events in which she was either first or second. She has finished in the top 10 in 168 events  a remarkable 71.2 percent of the time. Paradoxically, she is so good so often that she has been denied the appreciation she deserves.

Part of the reason Sorenstam has flown under the radar screen involves how intensely she has flirted with perfection. Think back on the most memorable shots Woods has hit in his career, those shots that are replayed over and over again in highlight videos. There was the 6-iron out of the bunker over water on the final hole of the Canadian Open. There was the 4-iron out of the bunker to the 18th green at Hazeltine in the PGA Championship. There was the 60-foot putt on the island green 17th hole at the Players Championship. There have been countless shots muscled from seemingly impossible lies in the rough. There was the spectacular chip-in this year on No. 16 at Augusta National in The Masters. What do they have in common  besides being great shots? They were all recovery shots. Most of Tiger's memorable moments have occurred when he has had to extricate himself from trouble.

Sorenstam, on the other hand, rarely produces highlight-reel efforts because she is rarely in trouble. Seventy-five percent of the time, she drives the ball in the fairway. Eighty percent of the time, she hits the green in regulation. In fact, Sorenstam's swing repeats with such reliable consistency that it is her poor shots that are more memorable than her great shots. There are simply so few misplays that it is those that are filed away in the memory bank. Although Sorenstam's achievements have exceeded those of Woods, her résumé has been compiled with much less pizzazz. That could all change this week at Cherry Hills in the U.S. Women's Open.

Almost as if trying to force sports fans to take note, Sorenstam has publicly declared that her goal for the season is to become the only player  male or female  to win four professional major championships in the same calendar year. In setting the bar so high, Sorenstam not only is challenging herself but also is challenging the world to take note. In her Hall of Fame induction speech in 2003, Sorenstam referred to a line written after she played in the Bank of America Colonial on the men's tour: "Annika Sorenstam is no longer a female golfer. She is a golfer." Concluding her speech, Sorenstam said: "Truly, that's all I ever wanted to be."

Although Sorenstam is not a political pioneer or necessarily an activist for greater recognition of women's athletics, she is a great golfer who wants to be thought of as such  not a great female golfer, but a great golfer. Certainly, the separation she has achieved on her tour is as dramatic and as complete as any athlete has achieved in any sport. And by declaring her Grand Slam goal so openly, she comes into this week's U.S. Women's Open much as a then Cassius Clay entered the ring against heavyweight champion Sonny Liston, or like Joe Namath when he took his New York Jets into the Super Bowl against the Baltimore Colts. Both Clay and Namath believed the impossible was not too great a task. That belief is what Sorenstam is all about.

Sorenstam's victories in the first two majors of the year  the Kraft Nabisco Championship and the McDonald's LPGA Championship  came with relative ease. In both cases, she played the back nine unchallenged. But of all the majors, the U.S. Open is the most demanding  both on the men's tour and on the women's. The course is set up for a degree of difficulty that almost guarantees there will be no runaway winner. Thick rough and fast greens make this tournament all about bogeys  and not making them  rather than about birdies. Sorenstam enters the event with the pressure she has placed on herself, and with ample competition.

Two veterans  2002 winner Juli Inkster and defending champion Meg Mallon  are playing their best golf of the year right now and will not be intimidated by a Sunday showdown with Sorenstam, should it come to that. The 20-something pool of talent  Cristie Kerr, Lorena Ochoa, Grace Park and Jennifer Rosales  is gaining the confidence necessary to hold up under final-round pressure against the seemingly unbeatable foe. And with Paula Creamer  who is a top-five player as an 18-year-old  and 15-year-old Michelle Wie, the future of the LPGA has never looked brighter.

If Sorenstam wins this U.S. Women's Open under the kind of pressure she has placed upon herself, and against the quality of competition she faces this week, she not only will be three-quarters of the way to the Grand Slam but also should be well on her way to being recognized as the dominant athlete she is. The tendency is to define achievement narrowly, place it in a convenient category and put it on what's deemed to be its proper shelf. But make no mistake about it: Annika Sorenstam is not a female golfer, she is a golfer. The voyage of personal discovery she embarks on this week will be well worth the watch. Enjoy it now. Future generations certainly will when they look back on Sorenstam's achievements and wish they had seen her play.

Ron Sirak is the executive editor of Golf World magazine