SILVIS, Ill. -- Michelle Wie had the number she wanted,
proclaimed to everyone on that sparkly buckle on her turquoise
belt, and a historic finish was just four holes away. 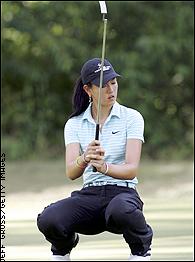 After one ill-timed three putt and a stray tee shot, though, she
went from historic to just plain history.

On the brink of becoming the first woman in 60 years to make a
cut on the PGA Tour, the 15-year-old from Hawaii was out after
finding big trouble on two of her last four holes in the John Deere
Classic. She missed the cut by two strokes, shooting an even-par 71
Friday that put her at 1 under for the tournament.

"It was pretty killer," she said. "Even though I finished
below par, it still feels [bad] because I played so well the first
nine and then I just totally messed up the back nine."

Wie was trying to become the first woman since Babe Didrikson
Zaharias in 1945 to make a PGA Tour cut, and she was on track to do
it with room to spare after making the turn at 4 under. But she
came apart in stunning fashion, dropping three strokes on Nos. 6
and 7, and then missing a last-chance birdie putt on No. 8.

As she walked off No. 9, her final hole, disappointment was
etched across her face.