LEBANON, Ohio -- Michelle Wie faded down the stretch again
and shot a 6-over 76 on the first day of stroke play at the men's
Amateur Public Links on Monday. 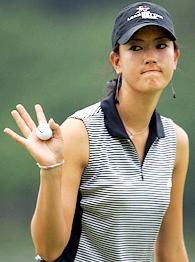 Wie, who won the 2003 Women's Amateur Public Links, is playing
in the men's APL because the winner traditionally gets an
invitation to the Masters. She just missed the cut at the PGA
Tour's John Deere Classic last week, finding trouble on the final
few holes.

It was more of the same Monday. She shot a 41 on the back nine.

"I played the front nine on Sunday, so I knew what I was
doing," Wie said. "I breezed through the back nine. I didn't have
a clue how it would play under tournament conditions."

She said a score around even-par 70 might be good enough to get
her into match play.

"Par's a good score -- that's what I'll be thinking tomorrow,"
she said.

Chan Song, the older brother of twin sisters Naree and Aree
Song, who play on the LPGA Tour, and Garrett Jones of Rewey, Wis.,
shared the first-round lead after opening at 6-under 66. U.S.
Junior Amateur champion Sihwan Kim was in a four-way tie for third
after a 69.

Wie played the first 10 holes at Shaker Run Golf Club in
even-par, then had two double-bogeys and two more bogeys on the way
into the clubhouse.

At the par-3 11th, she hit her approach into the lagoon in front
of the green.

"I hit a great shot and it was going right at the hole but a
gust of wind came up," she said. "It was like someone took the
ball and threw it down."

After taking a drop, her third shot went through the green and
she two-putted from just over 20 feet for a 5.

She followed that with consecutive bogeys and then parred three
holes in a row before finding more trouble at the par-5 17th.
Attempting to hit a 3-wood over trees guarding the left side of the
dogleg, she hit a high draw that ended up hitting a tree and
ricocheting into a lake. She took a drop, hit an iron out of the
deep rough and put her approach on the front of the green before
three-putting for a 7.

Wie was a huge attraction even before she hit the course.

More than 300 people lined the back perimeter of the driving
range to watch her hit balls, with several hundred more awaiting
her arrival on the first tee. When Wie left the practice tee, there
was not a single spectator who stayed behind.

The gallery watching her was frequently stacked three or four
deep behind each green. This is the first time that the sponsoring
U.S. Golf Association has ever put ropes around all the tees and
all the greens at an APL to keep spectators away from the players.

Bill McCarthy, the USGA staffer in charge of the championship,
said he's never seen anything like it at an Amateur Public Links
event.

"I can only say that during stroke play we might see some
immediate family and friends of the players," he said. "Occasionally, if we have a popular local player, we might have 20
or 30 players with a group. So this was, what, about 1,000 percent
bigger?"

Six TV cameras were trained on Wie as she teed off on the first
hole.

Her playing partners, unaccustomed to playing in front of large
crowds, were jittery from the outset.

Ed McDugle, a high school teacher and girls golf coach from
Memphis, Tenn., tried to break up the tension by doing a little
recruiting.

"I told her my No. 3 girl was transferring and that a couple of
my seniors graduated," said McDugle, who shot a 77. "My No. 1 and
No. 2 girls are going to be pretty good, but I told her I could
find a spot for her if she moved to Memphis."

Duke Butler of Ponte Vedra, Fla., rounding out Wie's group, shot
a 71 and came away impressed with the teenager from Hawaii.

"She has the best fundamentals of anybody I've ever played golf
with," Butler said.

Wie bogeyed the opening hole after hitting her second shot to
the par-5 hole about 30 yards left of and over the green. She hit a
delicate chip over a trap that rolled through the green and she
chipped up and two-putted for the bogey.

At the second hole, she drilled a long drive, hit her approach
to 8 feet and drilled the putt. A woman in the gallery yelled,
"Go, Michelle!" just as the ball fell in the cup.

The crowd was so big at the 10th hole that it looked like the
British Open, with fans moving into the fairway to circle the
green.