SAN FRANCISCO -- Tiger Woods and John Daly made the PGA Tour
feel like a rock concert Sunday, the delirium reaching such
decibels that Woods felt his ear drums pounding as golf's two
biggest sluggers headed for a sudden-death playoff at Harding Park.
It was a titanic struggle that ended with a whimper. 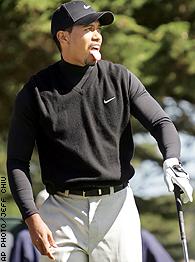