PALM DESERT, Calif. -- Michelle Wie is rich and famous because she so effortlessly captivates millions of people. Mobs of fans, old and young, track her every step. Sponsors crowd to get a slice of her precocious charisma. And viewers tune in for every swing, smile and shrug. This week, The Golf Channel even panned away from a still-rolling approach shot by another golfer to catch a Wie drive.

You simply can't take your eyes off her. And for so long, that was only a blessing.

A few minutes after watching their daughter finish an impressive fourth in her first professional tournament, B.J. and Bo Wie relaxed side by side in the media tent late on Sunday afternoon. They planned to meet Michelle and then celebrate her Sweet 16 at Bo's brother's house. They smiled and dried out and thought about the birdie putts that got away. Then William Morris golf director Ross Berlin hurried in and whispered to B.J. The three quickly walked out into the rain.

Sorenstam closed with a 3-under 69 on a rainy Sunday afternoon in the desert to win the Samsung World Championship by eight strokes. Sorenstam, who finished at 18-under 270, won for the eighth time this season. Full story

More on Michelle Wie's DQ:
• Adelson: The eyes have it
• Weekly 18: Under a microscope
• Sirak: Wordless war
• Wie devastated by ruling

Michelle's extended family huddled underneath umbrellas, unaware and unsure. They had no idea that Sports Illustrated reporter Michael Bamberger noticed that one of Wie's drops the day before -- on the seventh hole -- looked too close to the pin. Bamberger notified a rules official, who had summoned Wie and caddie Greg Johnston out to the Gold Lantana bush by the green. If any of the other golfers had made the same drop, no reporter would have caught it. Every writer had both eyes squarely on the 16-year-old.

After a long wait, B.J., Bo and Michelle rode around a bend in a golf cart. Michelle's eyes were bloodshot -- she had been crying. B.J. walked over and explained the ruling, gesturing and pointing in exasperation. The Wie clan nodded and slumped.

Two rules officials appeared in the media tent. They explained their decision with sure but hangdog expressions, using the word "unfortunately" several times. They did not pretend that they would have caught the infraction without help. Perhaps Birdie Kim or Gloria Park did the same thing during their rounds. No one will ever know.

B.J. entered a door on the side of the tent and put his arm around caddie Johnston, who looked both hurt and angry. More family members followed, but Bo was not among them. 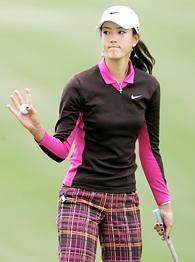 Then the door behind B.J. opened and Michelle appeared, wearing a white sweatshirt, jeans and black-rimmed glasses. Was this the same girl who appeared in full grin and business suit on the cover of Fortune just last week? "Move Over Tiger!" blared the headline. Now only cameramen moved over.

She sat in the very chair where she courted the media the day before, explaining with a big smile and a laugh how she used the geometry she learned in school to make the very drop that would cost her tens of thousands of dollars. This is someone who reads the Rules of Golf as closely as most teens read MySpace.com. The family keeps a rulebook by the recliner in their family room. Wie used what she knew to save her round on Friday when she took advantage of an obscure ordinance that allows a free drop from danger -- like a crocodile or a beehive. Wie's ball was nowhere near either, but a swarm of bees was enough to help her save par. Who knew that the next day, a swarm of eyes would do her in?

Cameras flashed as if Cameron Diaz had just gotten out of her limo -- the same cameras that sent thousands of images around the world earlier Sunday, assuring her another day of headlines and water-cooler talk. Wie held back her tears and put on a brave face, saying, "I learned a great lesson today."

She referred to a lesson about the rules, not the much bigger lesson that is only beginning to sink in. We will all be watching now, closer than ever. Some will watch in pride, some in awe, some in skepticism, all in judgment. Her mistakes will make every newspaper in the nation, if not the world. Her age and inexperience will no longer serve as excuses. She is a pro now.

Wie finished answering questions and stepped off the podium. She moved slowly through the throng of media and out into the growing darkness. She sat in a golf cart as cameras clicked and flashed and whirred. A PR rep asked for space, but none came. Berlin and a Nike rep stood on the back of the cart as it lurched forward. They are paid a lot of money to present a girl to the world in the best possible light, but sometimes all they will be able to do is stand behind their exposed young star and hold on.