SOTOGRANDE, Spain -- French golfer Jean Van de Velde will
attempt to enter next year's Women's British Open because he is
upset women may qualify for the 2006 British Open.
"I'll even wear a kilt and shave my legs," said Van de Velde,
who six years ago botched a chance for a British Open title in one
of the great collapses in a major. 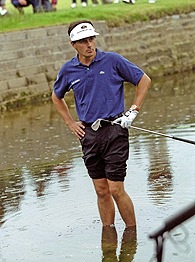 Recent policy set by the Royal and Ancient Golf Club will allow
women to qualify for next year's British Open.
"My whole point is where do we draw the line?" Van de Velde
asked after shooting a 7-over-par 78 Thursday in the first round of
the Volvo Masters. "If we accept that women can enter our
tournaments, then it applies that men can play with women."
The 39-year-old Frenchman said he would get an application and
attempt to qualify. Next year's Women's British Open is Aug. 3-6 at
Royal Lytham.
The event is run by the Ladies' Golf Union, which established a
gender policy this year that says: "It shall be a condition of any
competition organized by the Ladies' Golf Union that players must
be of the female gender."
Andy Salmon, chief executive officer of the LGU, said Thursday
there was no plan to change the rule.
The LGU this season established a formal gender policy
sanctioning players who had sex-change operations to become
females. The best known example was Danish-born Australian Mianne
Bagger, who played some LGU events in 2005.
"I just don't understand it, and if my application is not
accepted I will definitely get advice and see how far it will go,"
Van de Velde said. "I am making a point. I'm not trying to take a
sexist stance."
"I think there are much more important matters," he added. "I
think our governing body should concentrate on the long putter,
checking clubs. Things like that, not this."
Former Ryder Cup player Barry Lane suggested a change in the
rules could end women's golf.
"Do they want 100 men trying to qualify?" he asked. "If they
do there won't be any spots left for them."
At the 1999 British Open, Van de Velde led by three strokes
going to the 72nd hole, then wound up losing the tournament in a
playoff.