KOCHI, Japan -- Michelle Wie waited on the 18th tee with arms folded, jaw jutting, and eyes dark. This is always how she appears when she's bothered. 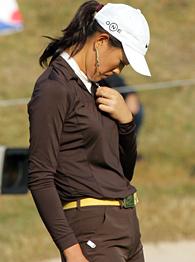 She gazed not so much ahead to the final and fateful fairway, but back and down at the 17th green, where she left a crucial chip and an ensuing putt short. Hundreds of Japanese fans waited in the distance, by the clubhouse, hoping she would make par, and the cut, and history. They are still waiting. So is she. So is everyone.

One would think a 16-year-old girl playing against adult men would suffer most in yardage. Not so. Wie went drive for drive with the best men on the Japanese tour for two days here at the Casio World Open. "I think she'd earn a tour card here," said playing partner Taichi Teshima. "Easy." Wie missed only two fairways during her second and final round on Friday.

She lost no balls, hit only two traps, and avoided all water completely. There were no bushes or Bamberger drops this time.

No, the distances that doomed Wie in Japan were those measured in feet and inches, not yards.

On 17, she used a wedge from the deep greenside rough when a poke with a mid-iron would have worked far better. So she left herself nearly 20 feet for par, and missed.
Same story on 18. She chipped short, stared at a tricky par putt, and read left-to-right on a slope that went right-to-left. She watched in horror as her putt veered away from the cup, then she covered her mouth in shock and pulled her cap over her eyes in shame.

This type of thing happened all day. After a birdie to start her round, she faced a long lag putt over a swale on Hole 2. But her putt didn't make it over the ridge. She carded a bogey and a three putt. Next hole, another lag over another swale, and another putt that looked like Sisyphus pushing his rock. Same result: a three putt and a bogey.

What's the problem here? Critics will say she has a choking problem. But that isn't fair, or true. Not when she plays one tournament a month, or less. "She doesn't come into tournaments with a lot of momentum," says coach and golf wizard David Leadbetter. "She doesn't yet have tournament nerves."

She's also much newer to putting than she is to driving; she's been tearing up the range since age 4, but for years she simply didn't like tooling around the greens. And she lives in Hawaii, where the grass is different -- bermuda versus bent -- and the slope on the greens is often more benign. Leadbetter says Wie may eventually live in Florida, in part so she can get more practice on different surfaces. Whatever the cause, she never looked comfortable on the slippery greens in Japan, and even short putts turned into white-knucklers.

So now the divide in opinion over Michelle Wie will deepen. Supporters will point to the nearly 4,000 fans who turned a remote, seaside resort into a Tokyo subway at rush hour just to gawk at a girl's drives and applaud her courage. She drove the ball far, and straight, and beautifully. Skeptics will hold up yet another close call and yet another last-minute disappointment.

It seems every tournament is as thrilling and ultimately unsatisfying as an Atlanta Braves season. Is she ready to break through? Yes and no. Yes, because she's a 16-year-old girl who can compete with -- and beat -- men. No, because the weapon she used to gain the world's attention is not the weapon she'll need to keep it.

Eric Adelson is a senior writer for ESPN Magazine. E-mail him at eric.adelson@espn3.com.