RANCHO MIRAGE, Calif. -- Karrie Webb was so stunned by the
final hour of the Kraft Nabisco Championship that she lost her way
after completing an amazing comeback Sunday. 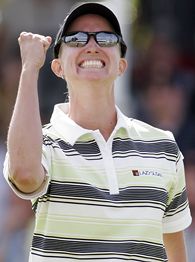 First came one of the most dramatic shots ever struck in a
major, a pitching wedge from 116 yards that covered the flag,
trickled into the cup for eagle on the par-5 18th hole and sent
Webb leaping into the arms of her caddie.

Then, she had to wait to see if it was good enough.

Michelle Wie had a chance to beat her with an eagle chip, but
wound up with par to finish one shot behind. Lorena Ochoa recovered
from a back-nine collapse in time to hit 5-wood onto the island
green at No. 18 and made a 6-foot eagle to force the first playoff
at Mission Hills in 14 years.

Webb won with a 7-foot birdie on the first extra hole.

Only then did her caddie, Mike Paterson, remind Webb of the
water surrounding the 18th hole and the tradition at the LPGA
Tour's first major. She removed her shoes, raced toward the pond
and took a jump she won't soon forget.

"I was standing there and Mike is like, 'Are we going in? Are
we jumping in?"' Webb said.

Asked to explain her seven-shot rally, and a magical shot that
sent her slow climb back to Hall of Fame standards into warp speed,
Webb could think of only one thing.

The 16-year-old Wie felt the same way.
Poised to become the youngest winner of a major, she stayed in
the game with clutch shots late on the back nine, including a huge
drive and a 5-iron to the green that left her 25 feet away for
eagle and the victory. Instead of a putter, she chose to chip. The
shot ran 10 feet by, and her birdie to force a playoff hit the left
lip.

"I was thinking I could make it," she said of the chip. "And
if I didn't make it, birdie. Unfortunately, it got away from me. I
guess it wasn't meant to me."

Webb closed with a 7-under 65 for her seventh career major, and
first since the 2002 Women's British Open at Turnberry. And it came
four months after she was inducted into the World Golf Hall of
Fame. 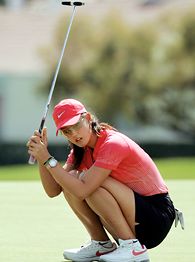 Wie had a one-shot lead with five holes to play but came up one
shot short for the second time this year, closing with a 2-under
70. Natalie Gulbis added to the theatrics with three birdies in
five holes, but her 18-foot birdie putt to join the playoff turned
away.

Defending champion Annika Sorenstam can rule out the Grand Slam.
She closed with a 70 and tied for sixth.

Once the dominant player in women's golf, Webb has been
retooling her swing, seeing the results on the range. She figured
she needed only a few good rounds, a few good tournaments to regain
her confidence.

What sent her to the top was a shot for the ages.

She was tied for the lead at 7 under, not knowing that Wie had
just stuffed a wedge inside a foot on the 16th hole. Webb had 116
yards to the hole, and her shot looked good from the moment in left
her club.

"Yeessss!" she screamed, running and leaping into the arms of
her caddie. Then, Webb punched the air with a roundhouse fist pump,
patting her chest to steady her emotions.

"I think my heart just about jumped out of my chest, because it
was aching for five minutes," Webb said.

Waiting for Wie, Ochoa and Gulbis to finish didn't help.

"I knew 18 was reachable for those guys," she said. "I
thought, 'I can't believe I have to play a hole after doing that,
because it took me 15 minutes to calm down."

In the playoff, she boldly went after the island green with a
fairway metal, the ball going through the green. She hit a flop
that rolled 7 feet past the cup, and thrust her arms in the air
when she made the putt.

Ochoa fought back tears after her second playoff loss in five
tournaments this year. A gutsy eagle on the last hole gave her an
even-par 72, but ultimately, it was only a consolation. She lost
this tournament along the back nine when she couldn't hit a fairway
and twice had to make testy 5-footers for bogey.

"The back nine, I was trying so hard," she said. "My driver
killed me."

For Wie, it was a wedge that will be questioned until she gets
her next crack at a LPGA major.

Needing a birdie on the final hole to get into the playoff, she
hit her best drive of the day and hit a flush 5-iron that went
about 5 feet too far, sliding down the bank to the right of the
flag. Instead of using her putter, she had the pin removed and
chipped.

The ball came out hot and went 10 feet by, and she crouched in
disbelief when the birdie putt caught the left lip.

"I thought it was going in as soon as I hit it," Wie said.

She said she chipped because she thought it gave her a better
chance to make it for eagle and the victory, and was surprised how
fast the green ran away from her.

Asked about whether destiny worked against her, Wie quickly
contemplated a whirlwind finish.

"Karrie holing it out, Lorena making eagle on the last hole, me
not making birdie ... it must not be meant to be," Wie said. "I
tried my hardest."

But she showed a will to win that may have been lacking in
previous majors, and indicates that her breakthrough victory might
not be too far away.

Starting the final round three shots behind, Wie had a one-shot
lead with five holes to play until pulling her tee shot on the
par-3 14th away from the water and into a bunker, making bogey. But
when the tournament could have gotten away from her, she holed a
7-foot par putt on the 15th hole to stay in a tie.

Then the fireworks began on a sunny day in the desert.

Wie's wedge on the 16th hopped next to the cup and spun slightly
toward the hole, a foot away for tap-in birdie. That roar was
followed by another, a half-mile away -- Webb making eagle on the
18th.