Earl Woods was the biggest blowhard golf had ever seen until everything he said came true. On an August day in 1996, a few minutes after his 20-year-old son turned pro, Earl was asked the question of the moment: From just seven season-ending tournaments, could Eldrick hope to earn enough prize money to avoid the PGA Tour's qualifying school? "Giving Tiger seven chances," Woods replied blithely, "he's going to win one of them, isn't he?" What a character this guy was.

Tiger won two of them.

Earl's father, a Kansas stonemason named Miles Woods, loved the Kansas City Monarchs (the New York Yankees of the Negro baseball leagues), and, because he lived in a military town and had four daughters, hated the Army. Perversely independent, Earl rejected a contract offer from the Monarchs and became a career soldier. Maude Ellen Woods, Earl's mother, was his model. Both a gentle spirit and a pragmatist, she advised her children, "Remember, if you lose your temper, you don't have a chance." Her recipe for safeguarding pride and dignity: "Talk to each other about prejudice, and laugh about it -- and at it. Prejudice isn't only stupid, you know. It can also be pretty funny sometimes." 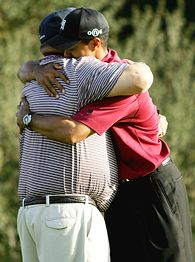 On Tiger's "Hello, World" day at the Milwaukee Open, his father was full of outlandish declarations. Given a choice, he said, he would not have fathered another child at 43. (Earl already had three children from a previous marriage.) But Kultida's Thai culture necessitated a pregnancy, "and I don't shoot blanks," Earl said.

"Tida" selected (actually invented) the name Eldrick, because it began with an E for Earl and ended with a K for Kultida. But, from the second day on, Earl called the baby "Tiger" after a lost comrade in Vietnam, Col. Vuong Dang Phong -- Tiger Phong. "I knew, instinctively knew," Earl said, "that my son was going to have fame. Someday my old friend would see him on television, read about him in a newspaper or magazine, and say, 'That must be Woody's kid,' and we'd find each other again."

In Ho Chi Minh City and Hanoi, a search for this ghost soldier commenced. Outside of a re-education camp in North Vietnam, the grave was found. "I cried like a baby for two days," Earl said. "Tiger kept telling me on the phone, 'I know, I know. It's OK, I know.' " They had changed places.

Phong's widow and a couple of his children were brought to Earl's house in California, as Tiger flew in from Florida. "I didn't know him as Tiger Phong," Tiger said in the living room. "I just knew him as Tiger One. We always had a connection, a stronger one than I can explain to you. From all I hear, I'm exactly like him."

Just a few months ago, in that same living room, Earl was sitting in an easy chair, but sounding uneasy.

"What's this for?" he asked suspiciously.

"Nothing special," said the man who went to Vietnam. It was just that they hadn't talked in a while. "Really?" Woods said. His eyes seemed to wonder whether it might be for the obituary.

"I promised Tiger I'd be around until I was 84," he said, answering the unspoken question. "That was years ago. I reiterated it recently. Eighty-four just sounds right. I don't want to be a liability. All of my illnesses -- heart, cancer -- have taught me to live in the now, to maximize each and every day. But I won't say I haven't had fears. Some of them, I blame on steroids."

For a tumor behind his right eye, Woods underwent radiation therapy. "Topped off by those damn steroids," he said, "to shrink the brain away from it so that the tumor couldn't take root in the brain. Man, I've been fighting the aftereffects ever since. Retaining water. Look at my legs. They're like balloons. I'm developing a claustrophobic feeling, too, and I know where it came from, those damn steroids."

At times, Earl said, he actually feared going to sleep. "Oh my God, I've been petrified," he said, "and, you know, that's not me. I sit up and watch movies all night long. If I lie down, it's like I can't breathe. Look at this, I've got a twitch in my finger, too. I never had anything like that before."

Not surprisingly, his main pleasure continued to be following Tiger on television. "I love watching him when he's doing things nobody else can see. Do you know what one of my favorite tournaments is? The Memorial. Because I can see him practicing shots for the U.S. Open. Everyone else is trying to win that tournament. He's trying to get better. And then he wins it anyway. Isn't that the story of Tiger?"

While watching his son, Earl said he often flashed back to the smallest details of their saga. Just the way Tiger holds his head might trigger a memory. "Once," Earl said, "when Tiger was about 14 or 15, he blew his tee time at a tournament in San Diego. You know how some people cross their 7s? Well, the way it was written on the sheet, he misread the starting time. 'OK, you screwed up,' I said. 'Let's go home.' During the drive, after he finally came out of his funk, we got to talking about grinding for a score. When we passed a public golf course, he said, 'Dad, can we stop here and practice grinding?' We played seven holes. Tiger birdied five of them. When I see him grinding now, I think of that."

Being a sentimental man, Earl got to worrying a few years ago that Tiger's life of golf and celebrity and "his surgeon's degree of concentration" might be costing him some human dimension. "The phone rang once," Earl said, "and it was Tiger on his cell. 'Where the hell are you?' I said. 'Australia,' he said. 'What the hell for?' 'I'm scuba diving,' he said. I told him, 'Don't you know there are Great Whites down there?' He said, 'I won't bother them if they don't bother me.' He thought nothing of it.

"When I hung up, though, I felt a little sad. 'Does Tiger have to go all the way to Australia to get out from behind that gate at Isleworth and away from all those damn $20 million houses?' But then I got to thinking of the friends he has always had, the few really good friends, the ones he has stayed loyal to because they have always treated him the same. You know, Tiger's the biggest joke prankster I've ever known. He'll rag on you forever. He's as human as you can be. He's OK, I thought. I stopped worrying.

"And now he has a wife, a great wife. It's hard for a caveman to go out on a hunt, bring the damn food into the cave, light the friggin' fire, do every other damn thing, and then sit there and eat alone. Now, Tiger is really at peace. Which means, now, he's really dangerous."

Tiger's business was in good order, Earl said. He had no concerns on that score. "I used Kareem Abdul-Jabbar as an example when Tiger was growing up. I told Tiger what a smart guy, what a good guy, Kareem was. But he didn't pay enough attention to his finances, and it cost him. I was the one who set up Tiger's financial empire -- I'm proud of that -- but I wasn't even in the room when he signed the first contract with Nike. That was intentional." Later, after signing the first of the many million-dollar contracts, Tiger came to Earl and said, "I need $300, Dad, for the entry fee." "I looked at Tiger and said, 'Will it never end?' We both laughed. 'Thanks, Pop,' he said."

Over this past Christmas, Tiger half-moved back into the little house in Cypress, Calif., to be with his pop. As time grew short, they stayed close. In a line with Deke Palmer, Harry Player, Charlie Nicklaus and the other patriarchs of the PGA Tour, Earl Woods played a character part in the story of golf: full of himself, overflowing with superlatives for his son, but sweet. "Isn't he a beaut?" said Tiger, who adored him. Yes, a beaut. That's the word.