SILVIS, Ill. -- This had to be the most painful cut for Michelle Wie. 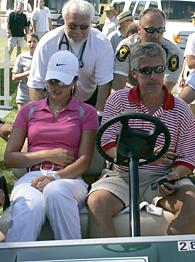 Trying to become the first woman in 61 years to make a PGA Tour cut, the 16-year-old instead was hospitalized with heat exhaustion for several hours Friday after withdrawing from the John Deere Classic with nine holes left.

She was visibly sick for much of the round, struggling to keep herself from getting sick on the course on a hot, steamy afternoon.

After being treated at the course medical trailer, she was taken to a hospital in an ambulance, an IV in one arm.

"She suffered a number of different symptoms, including stomach pains, nausea, dizziness and breathing problems, which worsened as the round continued," Wie's agent, Ross Berlin, said in a statement. "Michelle was diagnosed with heat exhaustion and is now resting and in very good spirits."

Wie was released about 8 p.m. and was resting comfortably, according to a statement from her publicist. Wie will now have a week off before a two-week trip to Europe for the Evian Masters in France and the Women's British Open.

Wie nearly got sick on the ninth tee and walked much of the hole holding her chest. She managed to finish but after talking with her parents said she couldn't play anymore. She was then taken to the course medical trailer.

Illinois law required she be taken to a hospital for further attention, and she left in an ambulance about a half-hour later. Her mother, Bo, accompanied the teen in the ambulance and her father, B.J., followed behind in an SUV.

"She's fine. She's getting better," B.J. Wie said when he came out of the course medical trailer.

This was Wie's fifth attempt at becoming the first woman since Babe Zaharias in 1945 to make a PGA Tour cut. But her chances at history were all but over after she opened with a 6-over 77 on Thursday, leaving her 13 strokes behind the leaders and eight strokes over the projected cut line.

The temperature Friday afternoon was 88, with the sun and humidity making it feel as if it was five degrees warmer.

"It was definitely warm," said Jeff Gove, one of Wie's playing partners. "We haven't had a lot of heat this year."

And Wie played when it was at its hottest, teeing off shortly before 2 p.m. She was looking listless by the time she approached the fifth green, sitting on her bag with her head bowed, a towel to her face.

"We've had several cases of heat-related illness, but mostly spectators," said Dr. Benjamin Shnurman, a physician and tournament medical staff volunteer who treated Wie. "We haven't treated any other players with this type of condition."

She was in obvious pain over the next four holes, bending over and gripping her stomach, wiping her face with a towel and sitting on her bag every chance she got. Her caddie gave her several bottles of cold water to drink, but Wie only got worse and Shnurman was summoned when she was on the seventh hole.

Though she gutted out the rest of the front nine, her play got more and more mechanical. She managed only a slight wave after making a nice birdie putt on No. 8 and responded with a weak smile when a fan called out, "Nice shot, Michelle."

After teeing off on the ninth, she took a seat on her bag, holding her sides and bowing her head. At one point she sat up straight but put her hand to her mouth, as if she was going to get sick.

When she stood up, she put her hand to her mouth again and headed toward some weeds next to the tee. She stood there for a minute or two but didn't get sick. Shnurman checked on her, walking with her to her ball and asking how she was feeling.

"With the heat and when you don't feel well, she was appropriate for what she was going through," Shnurman said.

After putting out on the ninth, Wie went to talk to her worried-looking parents. After making the decision to withdraw, she said goodbye to her playing partners.

"She just said, 'I'm going to withdraw,' which was good because she was holding us up again," said Gove, who finished at 1-over 143 and missed the cut by three strokes.

Wie is now 0-for-5 in PGA Tour events. She will get another chance to make history in September, when she is scheduled to play the 84 Lumber Classic at Nemacolin Woodlands Resort & Spa in Farmington, Pa.

Wie needed the round of her career and a lot of help Friday to make the cut. She didn't get either, scrambling to save par on No. 1 and making a bogey on the par-5 No. 2 when her 15-foot par putt stopped just short of the hole.

Wie started struggling on the long par-4 fifth. She had an animated discussion with her caddie, Greg Johnston, and he appeared to be trying to encourage her. When they approached the green, though, she took a heavy seat on her bag and bowed her head.

After teeing off on the sixth hole, she sat on a box and then stood up and leaned on a cooler. She walked off the tee rubbing her stomach and bent over her bag until it was her turn to hit.

As she waited for Gove to putt, Wie knelt at the edge of the green with her head bowed, pulling the bill of her baseball cap over her eyes.

"I saw she was hurting, but she never said anything," Gove said. "And she was walking real slow, which I thought was inconsiderate again because we're trying to keep up. If we get on the clock again, that's painful."