EVIAN, France -- Michelle Wie had a two-shot lead after 11
holes and seemed poised to answer all of the questions about when
her first professional win was going to come.

Then the 16-year-old from Hawaii bogeyed the 13th hole.

That was all Karrie Webb needed.

Webb became the first woman to win three events this season
after shooting a 4-under 68 in the final round of the Evian Masters
on Saturday, denying Wie her first LPGA Tour victory.

"I'm getting very close. Today was the closest I've ever been.
It's not as easy as it would seem," Wie said of getting her first
win. "I'm very proud that I've been playing this consistently.
It's an achievement on its own."

It marked Wie's best result this year and the fourth time in her
career that she has finished as the runner-up in a professional
tournament. In 2005, she was the runner-up at the McDonald's
Championship and tied for second at the SBS Open, as well as the
Evian Masters. She and Lorena Ochoa finished eight shots behind
Paula Creamer in last year's tournament. 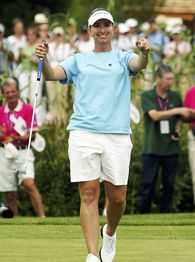 Wie was in a good position to become the youngest player to win
an LPGA event Saturday, trailing Webb by just one shot after the
third round. She has come close to victory on other occasions,
leading after the third rounds of the U.S. Open in 2005 and 2006.

Despite waking up with a stiff neck, Wie looked strong all day
as she played in a group with Webb and Davies.

"Karrie and Laura are awesome players and I was very honored to
play them," Wie said. "Laura made some awesome shots. I was blown
out of my mind and Karrie played some great shots, too.

"I can learn from them but I didn't feel I was lacking anything
playing them."

Wie tied Webb for the lead with an eagle on the par-5 ninth. She
even took a two-shot lead after a birdie on the 11th, which Webb
bogeyed.

"I was excited. I'd made birdie but I didn't feel anything
different," Wie said. "I knew there were a lot of holes left."

The bogey on the 13th hole cost her.

"I'm getting very close. Today was the closest I've ever been.
It's not as easy as it would seem."
Michelle Wie

She drove the ball into the bunker, and her next shot found the
sand again. On her third stroke, Wie managed to get it onto the
green, but her 30-foot putt went 6 inches left of the hole, leaving
her in a three-way tie with Davies and Webb.

Webb, who birdied No. 12, took the lead for good with a birdie
on the 14th. She adds this win to victories at the Kraft Nabisco
Championship and the Michelob Ultra Open.

"I am very thrilled actually and really proud that I hung in
there," Webb said. "After I bogeyed and Michelle made a birdie
for a two-shot lead I told myself to believe in myself.

"I feel proud that I gave myself a chance to win, which is how
it worked out."

This season has marked a resurgence for the 31-year-old
Australian, who went two years without a victory before winning the
Kraft Nabisco in March -- her first major victory since the 2002
Women's British Open at Turnberry.

"Obviously, my win at the Kraft Nabisco was the first in a long
time so it felt pretty good," Webb said. "Though this feels
pretty great, too.

"But any time you're in a position for a chance to win it feels
like the first, you're dealing with a lot of emotion. You're
coaching yourself through every hole."

Wie ran into more problems on the 15th, when her tee shot went
soaring into the spectator area, landing near the boundary's
chain-link fence. There were also cables behind her feet, hindering
her.

"I was hoping to get a drop, but no," Wie said. "But they
moved the cables. My alignment was good and I used a 6-iron out of
there and left myself with a really good wedge shot."

That stroke landed on the green, about 10 feet from the hole,
but spun back about 35 feet. Her putt went 6 inches wide of the
cup, though she ended up sinking her a 7-footer for par.

Davies duffed her tee shot on the 16th, sending it only 60
yards, but on her next stroke got it out of the rough and onto the
green, closer than either Wie and Webb, and saved par.

Webb sank an 18-foot putt on the 17th for the birdie, increasing
her lead to two shots over Wie and Davies.

Though Wie finally mastered her tee shot on the 17th hole --
where she had struggled all week -- her putter failed her and she
settled for par. Wie had bogeyed the hole on Friday for the second
time in the tournament, along with a par there in the second round.

"I told you I'd be on the green," Wie joked afterward.

Wie struggled again on the 18th hole, sending her tee shot into
the rough, and her second stroke went into the bunker. She managed
to get up and down for a birdie, but it was too late to catch Webb.

Webb's tee shot landed on the fairway. On her second stroke,
after a moment of indecision and a brief discussion with her caddy,
she opted to protect her two-shot lead instead of attacking the
green, switching her hybrid for a wedge.

Par was enough for her to lock up the win.

Lorena Ochoa had an albatross, using a hybrid for the 191-yard
shot on the par-5 ninth hole, but finished fifth at 13-under.