LYTHAM ST. ANNES, England -- Michelle Wie walked off the
course at Royal Lytham pleased with her par saves on the final two
holes.

Then she got to the recorders' office and realized her effort
was all for naught.

Wie was penalized two strokes for making contact with a piece of
moss behind her ball during her backswing while hitting out of a
greenside bunker at the 14th. That left her with an 2-over 74
Friday and a two-day total of 4-over 148 at the Women's British
Open -- 10 shots behind leader Juli Inkster.

"There was a piece of moss right behind my ball," she said.
"I knew I hit it but I didn't think it would result in a penalty
of two strokes. I thought if you hit dirt it would be OK but I
guess I knew the rule wrong.

"It's not good after you play you find out you add two more
shots in the end. The par saves I made on 17 and 18 feel as though
they count for nothing in the end."

Inkster had an even-par 72, leaving her at 6-under 138, three
shots better than Silvia Cavalleri of Italy. Inkster is seeking her
eighth major and, if she can hold on, the 46-year-old would become
the oldest golfer to win an LPGA Tour major.

"I'm very happy with the way I played today, the way I got it
in, the way I got myself around this golf course," Inkster said.
"Tomorrow, if I drive the ball a little better on the par 5s, I'll
feel pretty good.

"Sometimes in majors you really have to grind it out and today
was one of those days so I'm very happy with what I shot."

Wie now seems to have little chance of winning her first
tournament.

The 16-year-old from Hawaii came into the tournament with high
hopes after a second-place finish at last week's Evian Masters and
top-five finishes in her previous four majors. But she is tied for
37th heading into the weekend.

"It is even going to be even a more dramatic finish," she
said.

The fact she had touched the moss behind her ball was noticed by
TV viewers and also tournament officials.

It's not the first time in her short pro career that Wie has
been penalized and found out about it later.

In her first tournament as a professional, the Samsung World
Championship at Palm Desert, California, last October, she took a
penalty drop for an unplayable lie during her third round. At the
end of the tournament, officials ruled she made her drop at the
wrong place, should have taken a two-shot penalty and disqualified
her for signing an incorrect card.

Asked if Friday's infraction would cause her to go back and
closely examine the rule book, Wie joked, "Well, it is not
actually great reading material, but I am going to definitely call
a rules official if something questionable happens."

Now she is 10 strokes behind Inkster, who shows no sign of
giving up her lead despite another struggle to get to terms with
British courses. 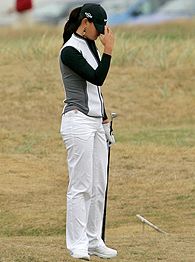 Inkster won all her seven majors on North American courses and
confesses that she appeared to leave her golf game on the plane
whenever she flew over to England. In eight visits, her best result
is a tie for 10th at Royal Birkdale six years ago just before it
became a major on the LPGA Tour.

Cavalleri, whose best performance on the LPGA Tour is a tie for
third at the 2002 Corning Classic, was tied for the lead with
Inkster until she took two shots to get out of a bunker at the
17th. She made triple-bogey seven and finished with a 73 for
3-under 141.

Annika Sorenstam shot a 71 and is five off the lead at 1 under
after 36 holes, while Mexico's Lorena Ochoa is 3 over after a 73.
Karrie Webb, winner of last week's Evian Masters, close to the
French Alps, had a disastrous 82 and missed the cut by a long way
at 14-over 158.

Sorenstam, who began at even par, made a charge from the sixth,
when she birdied five out of six holes. Her chances of getting
close to Inkster's score were hampered when her tee shot at the
eighth hole landed in a pot bunker and she made a double-bogey six.

The Swede also had a bogey five at 17, where she had a
double-bogey on Thursday.

Sorenstam won this title the last time it was played at Lytham
three years ago. She won last month's U.S. Open for her 10th major.

"This golf course is really challenging and you have to really
hit it on the number to be able to score here," Sorenstam said.