AKRON, Ohio -- Tiger Woods was in the rough, 167 yards from the ninth hole. Josh Stuber was behind the clubhouse, unloading a stack of crunchy cream pies.

The world's No. 1 golfer and a member of Firestone's kitchen staff were unwittingly linked Friday at the Bridgestone Invitational when Woods hit a 9-iron that sailed over the green, bounced onto the roof and landed on the other side, leading to a a chaotic search and ending nearly an hour later with a small measure of normalcy.
Woods was atop the leaderboard again.

Woods opened with four straight birdies and shot a 6-under 64 to take a one-shot lead over Davis Love III in the $7.5 million World Golf Championship, halfway home to his fourth consecutive victory on the PGA Tour.

What made this steamy afternoon at Firestone South so memorable was his only bogey on his final hole. 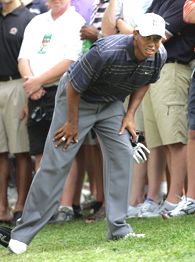 He hit a 9-iron shot that jumped out of the clump of grass and was headed toward the flag until it kept going -- and going -- all the way over the grandstand, off the cement path, over fans drinking beer in the balcony and onto the roof.

No one knew where it went.

Moments later, Stuber was unloading his pies when a ball with a black swoosh rattled his golf cart.

"I said, 'Who's throwing golf balls at me?'" Stuber said.

He picked up the ball and set it in the cup holder of his cart, then drove off to a villa to set up a corporate party, no idea whose ball it was or how it got there.

"I went down to the lodge, and the next thing I know, everyone is looking for me," he said. "They said, 'You stole Tiger Woods' ball.'"

Stuber said he saw the Nike swoosh and One Platinum written in fine print on the ball.

"I didn't notice the TW," he said an hour after the round ended, holding the ball and turning it over to show something else that might have given him a clue -- TIGER stamped on the other side.

Woods has won his last three tournaments, two of them majors.
Apparently, that's not enough. He's lucky, too.

"I thought for sure that ball must have been out-of-bounds," Woods said. "Then, it wasn't out-of-bounds. On top of that, we had to somehow find it. It was a huge break to get out of there with 5."

Woods got a free drop because the grandstand behind the green is a temporary immovable obstruction. Rules officials had to walk in an arc away from the back of the clubhouse, then used lasers to determine the yardage -- 97 yards -- and Woods eventually hit a lob wedge to 30 feet and two-putted for bogey.

Rules official Slugger White said the clubhouse has never been deemed to be out-of-bounds. In fact, he said Woods' ball could have bounced across Warner Road and onto the North Course, and it still would have been in play.

Adding to Woods luck was that rules official Mike Shea said the ball was located -- or enough evidence to figure out what happened -- seconds before the five minutes allowed to search for a lost ball.

If the ball had been out-of-bounds or lost, he would have had to go back to the rough and play his fourth shot, and Woods likely would have made double bogey at best.

Players trying to beat him -- a tough enough task as it is -- were shaking their heads.

"That's got to be out-of-bounds, isn't it?" Brad Faxon said.

Ernie Els and Sergio Garcia went to the back of the clubhouse to see the activity, and Summit County deputy sheriff Bill Muncy told them about the ball coming off the roof and rattling the Stuber's cart. They walked back inside, incredulous at Woods' fortune.

A week ago at Medinah, Woods hooked a tee shot in the second round that was headed for trouble when a fan jumped up and swatted it down during the PGA Championship.

It took him to a familiar spot -- atop the leaderboard at Firestone, where he is the defending champion.

Woods now is in great shape to capture his fourth consecutive PGA Tour victory, dating to the British Open last month. He also won the Buick Open, and picked up his third straight win last week at the PGA Championship.

Before arriving to the circus on No. 9, he looked as sharp as he has all summer.

Woods opened with four straight birdies, all of them inside 15 feet, and pulled into the lead on the front nine with a 15-foot birdie putt on the first, a two-putt birdie from 40 feet on No. 2 and an 8-iron into 10 feet on the third.

He made pars the rest of the day as first-round leader Adam Scott faltered, and wound up one shot clear of Love and in the final pairing Saturday.

Love said he heard about the incident while he was finishing his round of 65. He was asked what he thought of a ball that went over the bleachers, over the clubhouse and into the service area.

The greater concern is trying to stop Woods.

Scott overcame a sloppy double bogey at No. 6 to get within one shot of the lead, then closed with two bogeys for a 71 and was at 134. He was joined by Jim Furyk, who lost a seven-hole playoff to Woods at Firestone in 2001. Furyk had an ace on the 15th hole, and shot 31 on the front nine for a 65.

Love also was one shot behind going into the weekend at Medinah, closing with rounds of 73-76 that ultimately cost him consideration as a captain's pick for the Ryder Cup team. He had been on every U.S. team since 1993.

With the pressure of trying to make the team gone, Love believes he is able to play more freely. What changes the dynamics is being paired with Woods, who beat Love for his first of 51 victories in 1996, and usually gets the best of Love.

"The last thing I need to think about is how good Tiger is playing and what a streak he's on, and how I need to a win and how nice it would be to go to Kapalua [for the winners-only Mercedes Championships] and all those things," Love said. "I've just got to concentrate on playing a round of golf and let the rest take care of itself."