RENO, Nev. -- Japan's Yusaku Miyazato doesn't speak much English, so his caddie helped serve as an interpreter at the Reno-Tahoe Open on Friday after Miyazato became the first golfer in PGA Tour history to make two holes-in-one in the same round.

But when it came to a question about his plans for celebrating Friday night, the 26-year-old from Tokyo understood just fine.

"Drink much beer. Big party," he said with a wide smile.

Miyazato accomplished the unprecedented feat on a pair of par 3s. He hit a 4-iron on the 230-yard, downhill seventh hole and a 7-iron on the 173-yard, uphill No. 12 at the Montreux Golf and Country Club's mountain course designed by Jack Nicklaus. 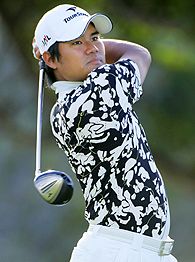 Estes erased the tourney's 36-hole record of 13-under 131 set last year by two-time defending champion Vaughn Taylor, who is playing this week at the World Golf Championship in Ohio.

Estes is one stroke ahead of Will MacKenzie, who had a PGA Tour record-tying three eagles on Thursday for a 63 and added a fourth Friday for a 67 to get to 14-under 130. With eight more shots at par 5s over the weekend, he's only one shy of the tour record of five eagles in a single tournament set by Dave Eichelberger in 1980 and equaled by Davis Love III in 1994, both in Hawaii.

But Friday belonged to Miyazato, a four-year player on the Japanese Tour who has earned less than $1 million there and is headed to PGA Qualifying School this fall.

Bob Tway had two aces in the same tournament at the Memorial in 1994 and Glen Day did it at the Greater Hartford Open the same year, but PGA Tour officials said no tour golfer had done it the same day.

Miyazato, whose sister Ai has four top 10 finishes this year on the LPGA Tour, had one previous hole-in-one in his life, so he was "very excited" when he holed the first one Friday, he said through his caddie.

"But the second time, it was really unbelievable. I couldn't believe it," Miyazato said.

Because of the undulating greens, he didn't see either drop in the cup. The crowd let him know the first was an ace.

On No. 12, the gallery was sparse so he thought it hit the pin but bounced away.

"When I went to the green, I was surprised," he said.

MacKenzie was playing in the group ahead and was told there were a pair of aces by the same golfer, but didn't know who.

"We heard them cheering back there," he said.

Miyazato said he understands the significance of the aces. PGA officials had him sign the two Tour Stage golf balls he used, which they planned to send to the World Golf Hall of Fame in St. Augustine, Fla.

"I'm very proud of the PGA Tour history," Miyazato said. "Everybody watches the PGA Tour on TV [in Japan] because there are many Japanese professionals."

Estes, who claimed the last of his four career wins at the Kemper Open in 2002, had seven birdies Friday in a bogey-free round on the heels of his opening 64 -- a first-round record at Reno.

"It is hard to follow up a really good round with another really good second round," Estes said. "I tried to pretend yesterday didn't happen, except for keeping the confidence part of it and try to make as many birdies as I could and just keep going."