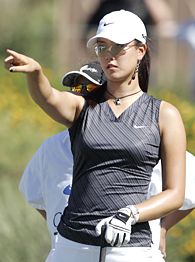 If anything, she held it up.

Starting her second year as a pro, Wie took a half-hour to play the 14th hole at Bighorn with two rulings, a whiff, an unplayable lie from a desert bush and a shot off the cement cart path just to get back to the fairway. She wound up with a quadruple-bogey 8 on the shortest par-4 at Bighorn, sending her to a 2-over 74.

The real show belonged to some familiar names on the LPGA Tour -- Lorena Ochoa and Annika Sorenstam.

Both waited endlessly along the back nine for the Wie rulings, although it hardly affected their games. Ochoa fired off four birdies in five holes, and Sorenstam caught up with her in the final holes as both finished at 67.

Sophie Gustafson powered her way to a 68, tied with Seon-Hwa Lee, who has already won the LPGA rookie of the year award.

Ochoa, the Mexican star with four victories and five runner-up finishes this year, could take a huge step toward winning player of the year with a victory at the Samsung World Championship. Sorenstam is trying to win this event for a record sixth time and needs a victory to keep alive her hopes for a sixth straight player of the year award.

Wie is simply trying to win for the first time, and despite looking like a lost cause, she hasn't lost hope.

"I was in some bad situations," Wie said. "My game is feeling really good. It's really close right now."

The good news for Wie is that she gets to come back on Friday and try again.

When she made her pro debut a year ago at this tournament, Wie was disqualified for an improper drop she took from a bush in the third round, an infraction that wasn't pointed out until a day later.

The gallery was about one-fourth the size as last year, and the only buzz was coming from the bees hovering around desert fauna. The blustery, hot conditions turned Bighorn into a brute, so tough that Sorenstam said it reminded her of the "Battle at Bighorn" in 2001, when she teamed with Tiger Woods to beat David Duval and Karrie Webb in a Monday night exhibition.

Sorenstam didn't putt off the green like she did in 2001 -- "You always learn," she said with a laugh -- but she didn't have many chances to do that. The Swede hit the ball so well along the back nine that her only birdie putt over 10 feet came on the 11th, from 20 feet.

Ochoa was inspired playing with the No. 1 player in women's golf, saying it reminds her of a final round. She hit wedge into 20 feet on the 10th to start her big run, banging the birdie putt into the back of the cup. The rest of her birdie putts were also inside 10 feet, although she slipped into a tie with a three-putt bogey from 12 feet on the 15th.

The 74 matched Wie's worst score on the LPGA Tour this year, although she somehow manages to deliver the theatrics.

She hit another shot off the cart path at No. 10 after getting relief from a drain, a ruling that tour official Charlie Williams later told her was incorrect. Wie took double bogey on No. 11 after hitting into a bunker, laying up short of a creek and three-putting. She followed that with a 60-foot eagle putt from behind the 12th green.

Wie told her caddie, Fanny Sunesson, that having made double bogey on the previous hole, "It's only fair I make eagle here."

But then came the 14th, which measures 354 holes and took what seemed like an eternity to play.

Wie sent her drive far to the right, the ball nestled against a rock. She took relief from the cart path and dropped into the thick desert sand, unaware that when the wind died -- which it did -- a branch was in her way.

In her haste, she missed it all together.

"Darn it, now I have to wait again," Wie said. The next one went about 25 feet into a bush, and she had no choice but to take a penalty shot for an unplayable lie, with her only option dropping on the cart path. Finally back in the fairway, she hit wedge to eight feet and missed the putt.

The scorers had no clue what happened and listed Wie for a triple bogey the rest of the back nine. But rules official Janet Lindsay said when Wie whiffed, the 17-year-old looked at her and said, "I did try to hit that."

In the scoring tent, there was confusion over the score until Cristie Kerr took over and went through all eight strokes.

The walking scorer said, "I thought she got free relief from the bush because of bees."

A year ago, Wie showed savvy with the rule book by getting relief from a swarm of honey bees.

Webb and Se Ri Pak were stuck on the 14th tee for 30 minutes behind them, with nothing to do but count needles on a cactus bush. Webb was particularly frustrated, coming off back-to-back birdies.

"It was ridiculous," Webb said. "I'm just happy we finished. If I had been able to step up to the tee and hit, I don't think I would have hit it where I did."

She also hit into a desert bush, next to an irrigation pipe. The ball moved when Lindsay stepped near the bush to determine the drop, and Webb eventually got free relief and took bogey.

Sorenstam and Ochoa were in the final group and had plenty of time to catch up.

They probably could have ordered dinner and had it brought to the course.