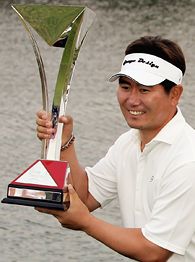 Woods failed to win a 72-hole tournament for the first time
since July 9, finishing two shots behind South Korea's Yang
Yong-eun in the HSBC
Champions on Sunday.

Yang, a regular on the Japanese tour who has played infrequently
outside Asia, closed with a 3-under 69 Sunday for a 14-under 274
and a two stroke victory over Woods at the HSBC Champions
tournament. Yang won $833,000.

The loss ended his streak of stroke-play victories, dating to
his runner-up finish to Trevor Immelman on July 9 in the Western
Open.

The only streak that remains for Woods is his six straight
victories on the PGA Tour. The HSBC Champions is sanctioned by the
Asian, Australasian, South African and European tours, and it was
the first official tournament of the 2007 season in Europe.

Woods' overall winning streak ended at the HSBC World Match Play
Championship at Wentworth in September when he was eliminated in
the first round.

Woods started the final round five shots behind and never really
threatened to overtake Yang. Woods birdied the 14th, 16th and 18th
holes, making a 4-footer on the final hole. He said his 73 on
Saturday in cold, blustery conditions cost him a good run at the
title in Asia's richest tournament.

"I wasn't quite good enough," Woods said. "Yesterday just
killed me. I was so far back and Yang just played a great stretch
of holes and just put it out of reach for all of us that were 6 or
7 under trying to make a run at him."

Third-round leader Retief Goosen hit his approach on 18 in the
water, part of a horrendous back nine when he shot 39 en route to a
1-over 73 and a total of 11 under. He was tied for third with New
Zealand's Michael Campbell, who matched the course record with a
64.

Yang started the day at 11-under par, one behind overnight
leader Goosen, but took a three-shot lead with seven holes to play.
He said he got nervous after a bogey at the 16th, but felt
confident when he reached the green on the 18th after watching
Goosen hit into the water.

"It's just such a big moment in my life right now I can't
explain it in words," Yang said. "Now that I've won, I want to
play a lot of tournaments overseas -- in Europe, the United States
and Japan. I want to compete against the best in the world, now
this gives me the chance."

Campbell, the 2005 U.S. Open champion, had a terrible third
round, making 10 bogeys in a 77. But he improved on that score by
13 strokes Sunday, making five birdies on the front nine and three
on the back.

He shares the course record with Woods and Henrik Stenson, who
both had 64s on Friday.

Scotland's Marc Warren finished fifth at 10 under, followed by
European No. 1 Padraig Harrington, Robert Karlsson and Paul Casey
at 8 under.

Second-ranked Jim Furyk closed with a 68 and finished at seven
under in a share of ninth with K.J. Choi, Johan Edfors, Italy's
Francesco Molinari and India's Jyoti Randhawa. 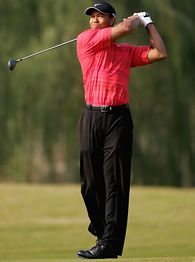 Woods said the form he showed in the second round was verging on
what it was before his five-week break.

He was followed by a packed gallery, buzzing with excitement on
almost every shot.

"I wish I could have made a few more birdies and made it more
exciting for them. We challenged for a win, but it wasn't the
case," Woods said.

The 30-year-old American took on the course from the start,
trying to make up ground.

He used a wood to hit out of a bunker hoping to hit the green in
two on the par-five second hole. He landed it just on the verge of
the green, but had to settle for par.

He also narrowly missed a birdie putt at the par-three fifth,
where the distractions of a cackle of gunfire from an automatic
weapon and a bugle salute from an adjoining army base brought a
smile to his face.

It was a missed putt for eagle at the par-five 14th ended his
challenge, Woods said.

"It was a momentum blower," said Woods, who admitted he did
not know anything about Yang until now.

"I was just trying to make as many birdies as I can and maybe
get second," Woods said. "If I could shoot 30 on the back nine
somehow, I thought maybe I could get into a playoff at best. It
didn't happen."

Yang has won four times on the Japanese tour and won his first
Asian Tour event earlier this year in a Korean Open field
containing Goosen.

Yang will play the Dunlop Phoenix in Japan next week, where
Woods will attempt to defend his 2005 title.