KAPALUA, Hawaii -- Vijay Singh wasn't interested in the
history he made by winning the Mercedes-Benz Championship.

A month away from turning 44, all he cares about is the future.

Coming off his least productive season in five years, Singh
reminded a winners-only field at Kapalua that he is still a major
force by closing with a 3-under 70 for a two-shot victory over
Adam Scott.

It was Singh's 18th victory since turning 40, breaking the PGA
Tour record held by Sam Snead.

And Singh became the first player atop the standings in the new
FedExCup competition, which the tour has dubbed a "new era in
golf." It brought out the old version of Singh, who delivered a
strong statement that his best golf is not behind him.

"I wanted this win, and I practiced hard for it," Singh said.
"I worked hard and it paid off."

How much longer can he continued to play at this level?

He had a lot to prove at Kapalua.

Singh had only one victory in his last 35 tournaments, and
conventional wisdom held that his body was breaking down. Instead,
he worked harder than ever. He worked out twice a day, and hit
balls for five hours in between. He promised himself to be ready to
play when he arrived at the season-opening tournament, and he was
in command at Kapalua from the start.

Singh doubled the size of his three-shot lead after two holes
and played the final 29 holes in blustery conditions without a
bogey. Only a late charge by Scott kept it interesting.

"You don't throw in the towel ever, no matter what," said
Scott, who trailed by five shots with seven to play and narrowly
missed a birdie putt on the 17th that would have trimmed the lead
to one. "It wasn't quite enough."

Singh finished at 14-under 278 and earned $1.1 million to push
him over $50 million for his career. It was his 30th career
victory, tying him with Leo Diegel for 16th for career victories on
the PGA Tour. 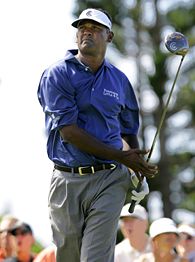 And he earned 4,500 points for the new FedExCup competition, a
season-long points race. The tour's promotion has been so strong
that Singh said earlier this week he was tired of listening to it.
All he wanted to do was win tournaments, and he took care of that
quickly.

Scott wound up missing his 3-foot comeback putt for par on the
17th, and a birdie on the 18th made the margin look closer. Scott
closed with a 69, enough to move up to No. 3 in the world ahead of
Phil Mickelson.

Trevor Immelman birdied the 18th for a 72 to finish third.

Singh was not aware of Snead's record until someone mentioned it
during the trophy presentation. He has read Snead's books and was
mesmerized by his rhythmic swing. But the record didn't mean much.

"There's no trophies for doing it," he said. "It's just a
record created by who? It's not even a record. It's just a
number."

And the Fijian is putting no limits on what he can do.

But it's no less impressive. Singh has 18 victories and one
major in his 40s, which is about the equivalent of a career for
Davis Love III. And as determined as he is to win, there's no
telling how much longer he will stay at this level.

"Anyone who says 43 is old, they can go to hell," Singh said
with a laugh at the trophy presentation.

His victory ended Stuart Appleby's three-year reign at Kapalua.
Appleby, who finished 10 shots behind, had won the last three years
by a combined four shots over Singh.

If anyone thought Singh's bad fortune on Maui would continue, he
quickly put that to rest.

He hammered his opening tee shot so far that it went through the
fairway, but his approach stopped 5 feet away for birdie. Singh
holed a 12-foot birdie on the next hole, and the rout was on as his
challengers fell apart.

Scott took bogey from the bunker on No. 2 and three-putted for
bogey on the fourth. Immelman three-putted his first two holes, and
fell further behind when he came up short of the fourth green and
dropped another shot.

About the only player who tried to make a move was
Will MacKenzie, and even he ran into a few problem. After opening with a
bogey, golf's free spirit ran off three straight birdies to get
within four shots. But he failed to birdie the par-5 fifth, and
after blasting a tee shot just short of the green on 398-yard
sixth, he bladed a wedge over the green into deep rough and took
bogey.

"I was really, really focused to do well," Singh said. "I
started off beautifully, and nobody was going to catch me."

Singh sailed along under a cloudy sky and wind not nearly as
fierce as it has been the first three days. He made eight
consecutive pars until a 12-foot birdie on the par-3 12th to extend
his lead to five shots, and didn't flinch when Scott made his
charge.

Divots
David Toms put himself in a good frame of mind for his
title defense next week in Honolulu. He closed with a 67, the
lowest score all week on the Plantation course. ... Chris Couch
holed out from 176 yards in the rough on No. 7 for eagle on his way
to a 70. ... Ben Curtis met his target Sunday by finishing his
round before the leaders teed off. Playing alone, Curtis was done
in 2 hours, 35 minutes. And while it might be a small consolation,
he improved his score each day -- 81-78-77-76. The former British
Open champion and three-time winner on the PGA Tour, who rarely
plays in the offseason, also finished last in his other
Mercedes-Benz Championship appearance in 2004.