SAN DIEGO -- As many times as Tiger Woods has played and won
at Torrey Pines, he has never figured out the patchwork shades of
blue in the Pacific Ocean below the cliffside course. Looking out
from the fourth green Wednesday morning, his New Zealand caddie
told him the darker the shade, the colder the water.

It was a fitting start to his 2007 season, staring at segments
that represent old and new, but blending. 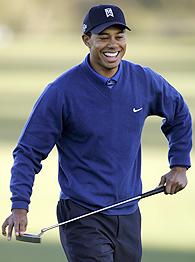 The Buick Invitational is his first tournament of the season,
but Woods carries over from last year a PGA Tour winning streak
that dates to July. He is going for his seventh in a row on the PGA
Tour, and odds are in his favor as the two-time defending champion.

"It is meaningful because it's not easy to do," Woods said,
and he should know because he won six straight PGA Tour events at
the end of 1999 and beginning of 2000, the second-longest streak
behind Byron Nelson's 11 in a row in 1945.

But he also doesn't consider it a real streak.

That ended at five in October when he lost in the first round of
the HSBC World Match Play Championship in England. Throw out match
play, and Woods was runner-up consecutive weeks in Asia.

Also in transition are his emotions.

Gone is the dread Woods felt at Torrey Pines last year when he
knew his father had only a short time to live, replaced by the
excitement of his wife being pregnant with their first child, due
sometime in July.

"I would love to be the one to beat him so he wouldn't be able to make it seven in a row. I don't think it's stale.  It gets stale for us because he's winning every week. That's what kind of [stinks] a little bit."
-- John Daly, the last player besides Tiger Woods to win the Buick Invitational

He was lively during his pro-am, talking about the changes to
Torrey Pines for the U.S. Open next year, his dinner Tuesday night
with San Diego Chargers running back LaDainian Tomlinson, his
wife's plans to finish out her spring semester in college.

The first step in his new year starts Thursday against a 156-man
field that is not as strong as recent years, but looks stacked at
the top with Woods, Phil Mickelson and Vijay Singh.

And while there is much talk about a streak, that tends to shift
some attention to Mickelson.

Woods won the final four PGA events in 1999 (he finished sixth
at the Johnnie Walker Classic in Thailand in November) then won the
first two events of 2000 to raise remote possibilities that
Nelson's untouchable record might be within reach.

The next stop was Torrey Pines.

"He didn't get it, did he?" Mickelson said, trying to fool his
audience with a quizzical look. Lefty knows better, having pulled
away over the final six holes to end Woods' streak at six.

"He's on a remarkable tear," Mickelson said. "He's obviously
an incredibly talented player, but when he gets on runs like this,
it's very difficult to stop him. But I know a lot of guys in the
field are going to be doing their best."

Not many of them are as fresh -- or maybe rusty -- as Woods.

He took a five-week break after his Target World Challenge,
skiing in Colorado and going back to the practice range two weeks
ago. It was long enough to make him miss the competition, although
that has been lacking since July.

Isn't that getting a little old?

"I would love to be the one to beat him so he wouldn't be able
to make it seven in a row," said John Daly, the last player
besides Woods to win the Buick Invitational. "I don't think it's
stale. It's good for the tour. It gets stale for us because he's
winning every week. That's what kind of [stinks] a little bit."

About the only thing that might slow him down is becoming a
father.

Woods said he would skip the British Open if his wife was about
to give birth, which was more important than trying to become the
first player in more than 50 years to win golf's oldest
championship three straight times.

"If she's going to have it during the week of the Open, I just
don't go," he said.

But previous life-changing experiences haven't stopped him -- not
his marriage in 2004, not the death of his father last May.
Mickelson has three children, and had lackluster performances
during two of those years because of difficulties during the
pregnancy. Otherwise, he doesn't expect fatherhood to change Woods.

"I certainly hope it does, but I don't see that happening,"
Mickelson said. "He's always been able to balance so many
different areas of his life that I think this will just be another
area that he adds into the mix, and a very rewarding part of his
life."