MIAMI -- The No. 1 player wasn't even the most popular in
his own group Wednesday, and that was OK with Tiger Woods.

Roger Federer came out to watch him play Doral. 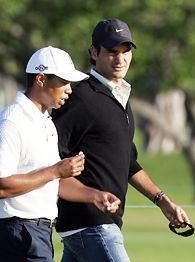 "It's pretty neat when you have probably the most dominant
athlete on the planet out there in your gallery," Woods said after
his practice round for the CA Championship, where he is the
two-time defending champion.

This is the first time Woods and Federer, the top players in
their sports, have competed the same week in the same city.
Federer's opening tennis match is Saturday night in the Sony
Ericcson Open at Key Biscayne.

Woods and Federer, both IMG clients, struck up a friendship last
summer when Woods sat in Federer's box during the U.S. Open final.
Federer watched him play in Shanghai during the HSBC Champions last
November, and they were together again in Dubai last month.

"I had never really seen live golf from professionals up until
the last year," Federer said. "It's different from sitting in a
stadium watching soccer or a tennis match. You've got to know where
to stand to see the ball. For me, it was hard to follow the ball. I
lost it just because he hits it so hard and so far."

The hardest part was getting a view from inside the ropes.

Dressed in blue jeans, an untucked collared shirt and a black
cap, Federer showed up on the back nine and was swarmed by fans
wanting autographs. A tournament official let him inside the ropes,
but PGA Tour officials said he couldn't stay.

Only when Woods invited him in did Federer get some space.

"They said they didn't want to do a favor because other players
otherwise want the same treatment," Federer said. "I guess just
one Roger Federer was coming to the golf course today, so it was
nice they got me inside the ropes."

"I'm sure I'll get fined for it," he said with a laugh. "I
don't mind paying because he was starting to get hassled pretty
good. That's not why he came out here. He came out here to enjoy
himself and watch me slap it around a little bit."

Woods said he would go to Key Biscayne on Saturday night to
watch Federer.

They posed for pictures beyond the 18th green, and Federer
walked through a corridor of fans as they yelled at Woods for an
autograph. Asked who gets more attention, Woods said he probably had a
slight edge.

"I don't know if you'd call it an advantage or disadvantage,"
Woods said. "Globally, I don't know. But certainly in this
country, I'm probably a little bit more recognized than he is."

"He's got media after the rounds, media after the practice
rounds, fans following him during matches, practice rounds. It's
the same thing for me," Federer said. "Autographs, photographs,
everybody always wants something from you. You need tight security.
It's almost easier when he's on the golf course."

"With us, they scream after every point," he said. "With him,
it's not every shot."