When the difference between a thoroughbred and a plow horse can be as slim as one six-foot putt a day, the life of a touring professional is more apt to wind up in a house of mirrors than the Hall of Fame. In the movie "Bull Durham," minors home run king Crash Davis narrowed it down to, "just one more dying quail a week and you're in Yankee Stadium."

Ben Bates is the undisputed Crash Davis of the Nationwide Tour, having made more 36-hole cuts in Smallville -- 194 and counting -- than any man alive. He'll turn 46 two days before the U.S. Open, a tournament he has qualified for only once although he pays the entry fee every year because he still believes in dying quails. Bates was an eyewitness in Bakersfield, Calif., in 1990 when that other Ben -- Hogan -- hit the honorary first shot to launch what was conceived of then as golf's Triple-A league. In the intervening 18 seasons he has hit a couple of dingers of his own, one in Wichita, Kan., and another one in Hershey, Pa. And he even did a four-year stretch up at the Big, although all he really had to show for it was the pension money he lost just about the time he set the minor league record for perseverance, or futility, depending on how you want to look at it.

"When they drop the flag on Thursday, there's nothing like it in the world," he says. "If that doesn't get your adrenaline pumping when you stand on the first tee and they call your name out, then something's wrong with you. I can't imagine that not being a thrill for somebody." 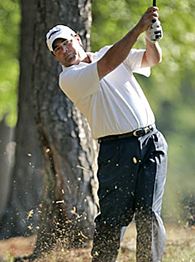 The quest began in Havana, Fla., a tiny town north of Tallahassee and about a 5-iron south of the Alabama border, where his father, Ed, was the professional and jack-of-all-trades at the nine-hole Havana G&CC.

"We used to not have any red lights," Bates says of his hometown. "Now we've got two. Every Thursday I can remember until I was grown, at noon the town closed. Down. Everybody went and played golf. Close up, go get some lunch, balls in the air at 1 o'clock."

In 1984, Bates graduated from Troy State, where he played on a Division II national championship team, then kicked around the mini-tours getting his pocket picked by guys such as Walter Zembriski and Dick Mast. He shared a condo outside Orlando with Jody Myers, a college buddy and the quarterback of the Troy State football team, who had left both Miami and Florida under murky circumstances before going under center at Troy. Young, single and hanging with an old college pal, Bates' taste for fun was, well, unabated.

"I've probably had more fun than most people have doing this," Bates says. "Jody was out of his mind. We were driving down the road, and there was an alligator, a little three-footer. He whips over to the side of the road, picks it up and puts it in the trunk. We go to Applebee's, and he sets it in the bushes right by the front door. We sat there and watched people all night long go in and out of there."

A man who had a voice made for big league karaoke (until his thyroid surgery three years ago), the ability to juggle and a seemingly limitless supply of blue limericks, Bates was perfectly suited to the old-style vagabond life of the newborn minor leagues.

"When it first started, it was a cast of characters," Bates says. "We weren't playing for any money. What we used to do that first couple of years, we had a group of 20 or 30 of us, staying in some seedy motel, and we'd go buy a little cheap grill. Somebody had a cooler in the car, we'd go buy the cheapest beer they had, and we'd sit around and grill out by the pool. That's what we did for fun."

Jim McGovern was another original cast member. A few years ago, he and Bates were playing a practice round in Hershey and decided to visit the racetrack that night. "Always looking for something to do, Ben and I," McGovern says. Bates called a buddy of his, Jimmy The Glick (you can't make this up), who knew a thing or two about horses. Glick gave them the name of a horse running in the fifth race. They got to the track during the fourth, and Bates went to buy a couple of hot dogs and a couple of beers while McGovern hustled down to the paddock to watch their horse parade.

"She comes out of the barn unsaddled," McGovern says. "Huge. Big-looking, strong horse. Coming back to the barn, the horse rears up and wham! Right on its back. My jaw's on the ground. Benny comes walking back and says, 'What's the matter, Mac?' And I said, 'Our horse just did a backflip.' He says, 'Get the hell out of here.' I say, 'There's no question about it. I just watched our horse do a backflip. We still got to throw money on it now just to see what happens.' So, we go and put 20 bucks down on this horse. They never scratched it. Horse comes out of the gate flying, and Benny and I look at each other. We're laughing about it as it goes around the first turn. Well, when they come back, literally, I think they had to hold up the sixth race for our horse to finish the fifth. Benny and I were in tears, we were laughing so hard. Our horse was walking down the backstretch. It was the funniest 20 bucks I ever spent."

But you don't play pro-ams for Ponte Vedra for 18 years, and make 194 cuts on the Nationwide Tour and another 65 on the PGA Tour, without loving something besides fun. The only teacher Bates ever had was his father. He has an unusual interlocking grip with his right hand almost on top of the club, yet his ball striking is as admired as his easy-going persona.

"His swing is kind of like his personality, just smooth and sweet," says Steve Haskins, the son of legendary basketball coach Don Haskins and the previous owner of the cuts record who finally decided to call it a career. "His putter has always been his nemesis. I don't think he ever went to the long putter, [but] the belly, the cross, the claw, all of those have darkened his door."

Stiles "Big Daddy" Mitchell -- who, like Haskins, gave up the fight this year -- is another admirer. "A good old country boy, loaded with talent," Mitchell says. "Old school. Hardheaded. Probably the best ball-striker I've ever laid my eyes on, ever. Laid back. Catches everything in his mitt, you understand what I'm saying?"

Bates lives on the other side of Escambia Bay from Pensacola in a fixer-upper on 6 1/2 acres with his wife, Melissa, her two daughters from a previous marriage, Graeson and Payton, and their 5-year-old son, Angus. Bubba Watson is building the big house not far up the road.

"I don't know if he's disappointed or he's happy he's setting the record," McGovern says. "To show how much resolve he has in playing over the course of however many years, but to do that much and not really have that much to show for it is probably a tough pill to swallow."

After Bates broke the cuts mark, two things happened in quick succession. First, he called Haskins. "Let me hand this dubious distinction over to you, baby," Haskins said. The second thing was a letter from the PGA Tour telling him he had failed to vest in the retirement program, and the money he had compiled toward it during his four years on the PGA Tour had evaporated. Poof! You see, although the Nationwide Tour enjoys some benefits in conjunction with the PGA and Champions tours, credit toward retirement is not one of them.

"With the cuts I've made, I think it's an accomplishment, personally," Bates says. "But my people who run the tour are basically telling me that I should be embarrassed about it. I understand, when [the Nationwide Tour] first came out, it wasn't going to be a place where people make a living. Now, with the World Tour, the FedEx Cup, not to mention the way they've cut back the fields, there are going to be a lot of guys floating back and forth between the Nationwide Tour and the PGA Tour, and there are going to be a lot of people who get caught up in this situation. You've got this umbrella, which includes the PGA Tour, the Champions Tour and the Nationwide Tour. Right now, we're the only ones who don't have a retirement program so, if we're not under the umbrella, we're getting wet."

According to Nationwide Tour president Bill Calfee, that status likely will remain quo. "I don't think there's a way for us to allow the Nationwide Tour to fall under the PGA Tour plan," he said. "We can't do it under the existing plan. We'd have to amend it, and we're reluctant to go back to the IRS. We could go to a separate plan for the Nationwide, but given where we are now, if there are any added resources, we have determined we ought to focus on purses rather than a retirement plan. It goes back a little bit to the philosophy that the intention is to transition players to the PGA Tour."

The PGA Tour likes to imply, if not outright claim, that the Nationwide is the second-best golf tour in the world. Although only people who haven't seen any Ryder Cup results the past 25 years would believe that, the Nationwide probably is in the top three.

If, in almost two decades, Bates' hair has gotten a little thin on top, the Nationwide Tour's mission statement has gotten gray at the temples, too. With 25 spots off its money list, it remains the best route back to the Big. But with the ever-increasing number of limited-field events driving card-carrying PGA Tour members back down, and the siren call of the no-cut Champions keeping others hanging on, it's not unusual to see, say, young Aussie Nick Flanagan at one end of the practice ground and Larry Mize, 20 years removed from his Masters green jacket, at the other.

"That's [almost] as long as I've been on the planet," says Flanagan with a shrug.

Despite the obvious successes of the Zach Johnsons, Boo Weekleys and Brett Wetterichs, the Nationwide has become as much a survival tour as a developmental one.

"People call it a developmental tour, and the same number of people call it the second-best tour in the world," says 29-year-old James Driscoll, who two years ago lost the Zurich Classic of New Orleans in a playoff. "You can't have a tour that's both. If it's the second-best tour in the world, then a lot of people are going to want to play it. I don't care if you're 49 or 19. So, for an American guy who's not on the PGA Tour, this is where they're going to play. It's not a developmental tour anymore. It can be for some young kids, but to call this, top to bottom, a developmental tour is not the right way to describe it."

At the South Georgia Classic two weeks ago, opposite the limited-field Verizon Heritage on nearby Hilton Head, Bates was unable to find a spot as an alternate. He was close, though, so he drove over from Havana just in case, another trip he made in vain. When he exited the property at Kinderlou Forest GC, he could have turned left for Valdosta or right to Quitman. Benny Bates can't help himself. The turn he chose might be toward a small market, but the dream is still the Big.