MEMPHIS, Tenn. -- John Daly told authorities his wife tried
stab him with a steak knife, and the golfer had red marks on his
cheeks when he showed up to play Friday on the course where he
lives.

Daly called police about 6 a.m. on Friday, Shelby County
Sheriff's department spokesman Steve Shular said. When deputies
arrived, wife Sherrie and the couple's children were not there.
Deputies could not find the knife he claimed she used. 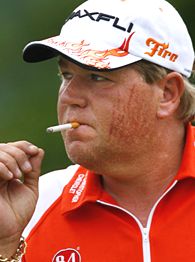 Daly is competing this week in the Stanford St. Jude
Championship on a sponsor's exemption. He was tied for eighth after
the first round in which he had a triple bogey and rebounded with
five straight birdies.

He did not speak with reporters, but issued a statement saying
he was the "victim of an assault by my wife."

"I filed a complaint with the Shelby County Sheriff's Office.
They are investigating, and I'll have no further comment on the
matter while they pursue their investigation. My only concern at
this point is for the safety of my children and myself," the
statement said.

Daly also said he was working with local authorities and tour
security for protection. He had two bodyguards with him through his
round, and he went from a tie for eighth to a tie for 58th with a
4-over 74 that featured two double bogeys, five bogeys and five
birdies.

He did not speak to reporters after finishing his round, which
should let him play into the weekend for only the fourth time in 12
events this year.

No charges had been filed Friday afternoon, and it will be
Daly's decision whether he wants that to happen, Shular said.

The 41-year-old golfer and his wife argued last night at a
restaurant near the golf course, he told deputies.

Daly has won two majors -- the 1991 PGA Championship and 1995
British Open -- but his play has been overshadowed by two trips to
alcohol rehab, outrageous tales of gambling losses, trashed hotel
rooms and suspensions.

Daly has struggled this season. He has one top-25 finish and has
made only three cuts. He has withdrawn from three other events.

Daly met Sherrie at this tournament in 2001, and they married
seven weeks later. Their son, John Patrick, was born a week before
she and her parents were indicted in Mississippi on charges
stemming from what authorities said was a drug ring and an illegal
gambling operation.

Sherrie Daly pleaded guilty in November 2004 to a charge of
conspiracy to structure a transaction to evade the reporting
requirement. She began serving a five-month sentence in January
2006, then filed for divorce in Shelby County on Oct. 17, 2006.

Daly filed himself a day later, then said a month later that
things were on hold. Shular said police had been called to the home
only once before for a false alarm in December and that Sherrie
Daly had listed a Collierville address for herself.

His autobiography -- "My Life In & Out of the Rough" -- details
his gambling and drinking addiction with one chapter devoted to his
three former wives that was titled, "All My Exes Wear Rolexes."