ELMA, Wash. -- Every golfer likes a birdie, even more so an
eagle. But an emu? 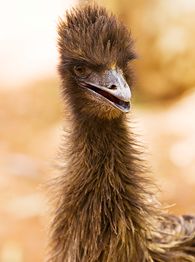 The big bird that showed up Tuesday at Oaksridge Golf Course was
another matter, at least for Sue McMeekin of Satsop and Les Bell of
Montesano.

The flightless bird, second in size among avians to the ostrich,
followed the pair for seven of their nine holes, watching each
swing and sometimes walking between them or standing directly in
front of them. The emu seemed to take special interest in
McMeekin's red fleece jacket.

"It was strange," McMeekin said. "She's awful big and she
made me nervous."

Emus, natives of Australia, can grow to more than 5 feet and 100
pounds and are capable of running as fast as 30 mph.

Jeremy Behm, a golf course employee in this town between Olympia
and Aberdeen, said he heard a strange sound as he was working in
the pro shop around 6:30 a.m.

"I heard a noise and this crazy bird was standing right
there," Behm said.

After hanging around the pro shop for a time, the emu began
following McMeekin and Bell while Behm called the Grays Harbor
County sheriff's office.

A deputy was dispatched but couldn't immediately determine where
the emu belonged. Soon afterward, the owner came from his home
across the street and rounded up the bird at about 10:30 a.m., Behm
said.