On a miserable, windblown Saturday in which only half the
matches were completed, it was a "choke" comment from former
American player Dottie Pepper that made as big a splash as anything
her one-time teammates did.

The Americans led 6½-5½, but after they let two victories in the morning matches slip away and settled for ties, Pepper, now an analyst for the Golf Channel, uttered "Chokin' freakin' dogs" on
the air, thinking the network had already gone to commercial.

It hadn't, and though that telecast was seen only in North
America, word spread quickly to Sweden. Suddenly, the lightning-rod
of a player whose likeness was once fashioned into a punching bag
by the Europeans at the Solheim Cup was serving up material that
could rile her own former team.

"I'm too involved with the Solheim Cup to worry about it,"
American captain Betsy King said. "Afterward, I'd be happy to
comment about it." 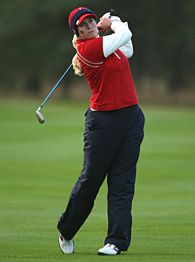 But many American players were said to be miffed by the
comments, and European captain Helen Alfredsson wasn't pleased,
either.


"I think it's totally inappropriate, no matter what," she
said. "We're all together in this. At the end of the day, it's all
for women's golf, and she, if anybody, should know how tough things
are."

Pepper could not immediately be reached for comment after
darkness halted play.

Don McGuire, the network's senior vice president of programming and production, said a technical glitch kept Pepper on the air when she thought she was off.

"Because of the competitor she is, that's how she felt,"
McGuire said. "It certainly wasn't meant for public consumption."

Told about her comments at the Tour Championship in Atlanta,
Tiger Woods said, "I don't think she's going to get a lot of
interviews from the players."

"I think everyone makes mistakes, and she's been great for
women's golf," Woods said. "She's promoted the game, was a great
champion, and I'm sure as time passes, people will forget it."

When play was suspended, the Europeans led 1-up in three of the best-ball matches and were all-square in the other, making the
one-point American lead as precarious as it could be.


"It's a good session for us," Laura Davies said. "It's the
first time the European team is getting on top a little bit."

The restart was set for early Sunday morning, and once the
fourball matches were complete, the 12 singles matches would go
off.

The Americans could take solace in the fact that they have
always fared better in singles, where they have a .590 winning
percentage.

But they could also regret missing some opportunities in the
earlier matches at frigid Halmstad Golf Club. And harsh as Pepper's
comments were, there was some truth to them.

"It's like you're only 1-up and you lose one hole and it's
like, there goes half a point," King said. "It's just been so
close, and so I've been telling everybody, 'Every shot is going to
count."'

Indeed, the Americans had plenty of chances to get more from the morning alternate-shot matches.

Juli Inkster and Paula Creamer had a 1-up lead through 15 holes, while Sherri Steinhauer and Laura Diaz were 2 up with three holes
to play. Pat Hurst and Angela Stanford were already in with a
4-and-2 victory and the final American team of Cristie Kerr and
Nicole Castrale was rallying nicely against Annika Sorenstam and
Catriona Matthew.

But it all unraveled over the next 30 minutes.

McDonalds LPGA champion Suzann Pettersen hit the shot of the day to salvage one of the ties for Europe. Standing in the rough to the
left of the 18th fairway, she played a big hook around some trees
in her path and nearly skimmed the flagstick with a shot that
stopped 4 feet from the hole. Teammate Sophie Gustafson made the
putt to halve the match against Inkster and Creamer.

Moments earlier, Steinhauer had missed a 3-foot putt that would have clinched the win over Maria Hjorth and Gwladys Nocera. It
could have been that miss that sparked Pepper's comment.

Still, all that might have been wiped out had Kerr and Castrale
rallied from 5-down to tie their match. It was possible until
Castrale's birdie putt on No. 18 cruelly lipped out, leaving
Sorenstam and Matthew with a 1-up victory.

Meanwhile, the Americans could also look back at a similar
European comeback the day before.

On Friday, it was Davies sparking the rally with a fantastic
hack out from the woods and a 50-foot par save on No. 16 to turn a
looming loss into a tie. That, along with another half-point in a
comeback by Sorenstam, kept Europe within a point after the first
day.

All this drama, combined with brutal wind that made the course almost unplayable, made it easy to forget that, yes, the United
States was actually winning.

Another good sign for the Americans was that the last two
Solheim Cups they won came even though they didn't have the lead
heading into the final day.

But this time, they'll have it, thanks in part to a two-hour
weather delay early Saturday, made necessary when course officials
arrived and saw toppled fences and debris on the course. Players
arrived to practice and it was so windy, their balls were
oscillating on the greens.

"I've never seen it this bad in tournament play," Hurst said.
"And nobody would be crazy enough to go out in weather like this
if we were playing for fun."

No surprise, then, that nobody was much up for lingering when this long, strange Day 2 finally ended.

"It's going to be nice to get a good night's sleep," American
Brittany Lincicome said, "and come back and try to play as good as
I can."