WESTFIELD, N.J. -- While the hot summer sun nukes the back of his neck and BB-sized drops of sweat streak down his forehead, David Shields strolls through the 265-year-old Presbyterian cemetery searching for a name.

He knows his relatives are buried here -- he's found them before -- but on this hot day, with a visitor in town to impress, the 64-year-old from Long Island, N.Y., is struggling to find the right tombstone.

"It usually jumps right out in front of you," Shields says, shaking his head in confused disbelief. "I know it's right here. Somewhere right here. Not too close to the road, not too far back. Right here." 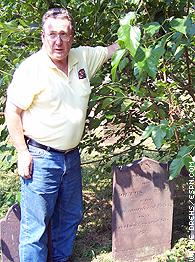 But right here is a tombstone from 1740. A few steps away is another from the Revolutionary War. And behind that, 150 years of sun, snow, rain and erosion have taken two other tombstones and crushed them into tiny fragmented pieces that are fading into the earth.

But Shields won't give up. The name he is desperately looking for is the same one that will be on the tips of every sports fan's tongue for the rest of the week -- Baltusrol, the name of the golf course hosting the 87th PGA Championship. Forget Crooked Stick, Winged Foot, or Valhalla, Baltusrol might be the most distinctively named major championship venue in the country, for nothing more than the story behind it.

'Crime of the century'
Baltusrol Golf Club is named after Baltus Roll, a quiet, thrifty farmer who, in the early 1800s, raised oxen on the land where Tiger Woods, Vijay Singh and Phil Mickelson will chase history this weekend. Roll was murdered on the night of Feb. 22, 1831. As the story goes, two men allegedly lured Roll out of bed that cold, snowy night, beating and battering him in hopes he would reveal the location of his fortune, which they had heard was stashed in the home. When Roll refused to cooperate, the thugs continued to pummel him before tying him up and tossing him outside, into an icy puddle where he died.

No one was ever convicted. One suspect, upon hearing the police were looking for him, committed suicide in a local tavern. The other was found not guilty after several items of incriminating evidence were found to be impermissible in court.

"It was the crime of the century because there were something like 96 witnesses who heard these guys talking about this money," said Margaret Bandrowski, president of the Springfield (N.J.) Historical Society. "But the defense attorney was sort of the Johnnie Cochran of his time, he gave a four-hour summation and the fella was acquitted."

The verdict outraged the community, and an effigy of the suspects was burned in downtown Newark. The story became part of local folklore, passed down from one generation to the next. Some 65 years later, when farmer Louis Keller decided to build a golf course on the land that Roll once farmed, the name Baltusrol was proposed, forever immortalizing the unassuming farmer.

Today, more than a century after the course first opened, nearly 175 years since Roll's murder, the case is still unsolved. And just a few miles away from where Tiger Woods will seek his third major of the year, David Shields is searching for the famous farmer's tombstone. And for good reason. Shields is Baltus Roll's great- great- great- great-grandnephew. In other words, Shield's fourth great-grandfather, Brooks Roll, was Baltus' brother.

Shields, who grew up in New Jersey but now lives on Long Island, discovered the relation some six years ago, when tracing his ancestors to this quaint New Jersey town. While driving through the town center, he spotted the massive Presbyterian Church and the cemetery across the street.

"When you see a big church like that and a cemetery nearby, I always go in," Shields said. "You never know."

That day, he parked his car, pushed aside the black iron gate, and without knowing what he would find, walked right up to the grave of Brooks Roll.

The grave of Baltus was less than six inches away. With family members typically buried next to one another, Shields figured he was also related to this man who he knew must have something to do with the local golf course.

The church office sent him down to the Westfield library, where he discovered a raggedy old folder with stacks of Baltus Roll stories that tied it all together.

"It was all written right there," he said. "That folder was a huge breakthrough. I eventually found my grandmother's grave because of that folder."

On this day, the search isn't going nearly as well. Maybe the tombstone is gone. Or perhaps, in the middle of summer, it's buried in some brush. Shields begins to peel back pushes and lift tree limbs. And then he spots it, hidden under an octopus-like series of sprawling branches.

The copper-colored tombstone of Baltus Roll.

"Here it is," Shields said. "I knew it was here somewhere."

In the six years since Shields' last visit, a tree had sprouted up behind Brooks' stone, covering the area like a blanket hiding a 3-year-old. But not anymore. Shields points out that Baltus' name is misspelled. "They weren't too fond of spelling back then," he explains. "Everything was phonetic, depending on who carved your tombstone."

And at the bottom of the tombstone, there's a poem:

Shields is relieved. He pulls out a white three-ring binder that chronicles his family's genealogy. It goes all the way back to the Mayflower. He shows the picture he took of Brooks and his wife Phoebe's grave six years ago.

He then begins to get a little sentimental.

"You can't help but think what would have happened if things would have been different," he says. "Perhaps I wouldn't have been here. Perhaps the name Baltusrol wouldn't mean a thing to Tiger Woods or Jack Nicklaus. You just don't know."

Searching for the land
A stranger suggests he might know the location of the house where Baltus was murdered. Shields is intrigued. The last time anyone wrote about the property was back in 1998. Though the home had been extensively remodeled, the foundation was still the same. The structure stood atop of First Mountain, where on a clear day, one could see the New York skyline. Three ladies lived there at the time.

Shields and the stranger head to the area, knock on eight different doors. Each time, Shields wonders if this is the plot of land where his great grand-uncle was once murdered, if this is the giant elm under which his famous relative once laid in a pool of his own blood. If this is the corner of the world that led to the naming of one of the world's most famous golf courses.

He asks mailmen, joggers, women taking out the garbage with their children, anyone he can find, curious if they know the house where Baltus Roll once lived. Wondering if they can point him in the right direction.

"You mean the golf club?" an elderly man responds at one house. "That's not really around here."

"I do not know him," says a woman behind another door. "How can you be out in this heat?"

Maybe the house is no longer there, maybe Shields is in the wrong neighborhood or maybe he's standing in the yard where this all took place and the people who live there now simply just don't know.

Whatever the case, one thing is certain, Shields says. His great grand uncle wouldn't quite know what to make of today. From Woods to Singh to thousands of people cramming the land he used to farm just to watch grown men play leisure activities, very little would have made sense.

"Their whole philosophy was completely different back then," Shields said. "Baltus was more worried about his farm producing crops than leisure time activities. He would have been blown away with everything taking place on his farm. But that's what makes this all so great -- the evolution of society."

Wayne Drehs is a staff writer for ESPN.com. He can be reached at Wayne.Drehs@espn3.com