To begin the story of the only major champion in the history of golf who was relieved to hear that he had low testosterone, you have to go back to the summer of 1993, when Shaun Micheel of Memphis was 24 and barely aware that he had just stripped off all of his golf clothes and was running into the Neuse River in his boxer shorts. "It happened so fast, it was surreal," he says. "It was like I was drawn into the river. I didn't have a choice."

The TC Jordan mini-tour was stopping in North Carolina, but a car on the hill didn't even pause as it ran out of road and nose-dived off a small cliff into the water with an elderly couple inside. "I remember how mad I was at the guy because he wouldn't get out of the car," Micheel says. "It seems so silly now. The windshield had collapsed in. I grabbed him and yanked him through it." Both the driver and the passenger were saved. 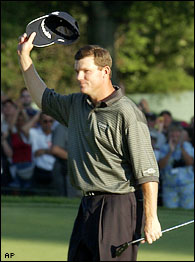 Ten years later, Shaun had a one-stroke lead and a 7-iron in his hand, 174 yards from the 72nd hole of the PGA Championship at Oak Hill, just his third major. "I failed to qualify for the U.S. Open that summer," he says, "and I didn't have any expectations at Oak Hill. A hundred and 56 guys in the field. One winner. What were the odds it was going to be me?" But he knocked the 7-iron within inches and made his 21st birdie of the week. It was like he was drawn into the hole. He didn't have a choice.

As everyone who ever came out of nowhere will tell you, the return trip is the killer. "When I didn't back it up with any good results," he says, "I started to be labeled a one-hit wonder." Though Micheel played four days in all of the majors of 2004, and shook off an opening-round 77 to tie for 24th in defense of his PGA title, he was depressed. "It wasn't so much that I played so bad. It was that I felt so bad. I lost my drive. I didn't enjoy practicing anymore. I presumed this was the normal decline from such a high. If I made a couple of bogeys, I just wanted to go home."

At home, Shaun was less charming than he had been before he was famous. "I seemed to be tired all the time, and irritable," he says. "I wasn't myself. I became a new father in November of '03, and now I'm trying to be a good husband, a good father to this precious little thing, and a major champion. And I'm failing at everything."

Shaun, 37, and wife Stephanie grew up in the same subdivision near the Colonial Country Club in Memphis. She was 11, he 13, when they started to fall in love. "Stephanie was the one who finally said, 'You've got to go to the doctor.' You know men. We don't go to the doctor on our own. We never ask directions."

For three days, he awaited the results of the blood test, especially braced to hear the words clinical depression. ("All sorts of stigmas attach to that.") When the doctor said "extremely low testosterone," the sky began to clear. An estimated 5 million American men are affected by low-T in some way. From a list of possible treatments, Shaun chose a gel that he rubs on his arms. That was in April of 2005. By September, Micheel's T-reading was in the normal range. His gentle nature returned.

"It doesn't make every drive go down the middle," he says, "but it makes me able to enjoy practicing again, to enjoy my family again. I'm not shooting for elevated counts, either. Just normal ones." These days, all of his goals are reasonable. "On Sunday in L.A., I went out and shot 67, and moved up from like 60th to 30th. I was proud of myself. At the Honda I shot 67 in the wind and moved up to 23rd. I was a pro again." In consecutive spring weeks, Shaun finished 12th and 13th. He was back among the top 100 money-winners. "In a way, it's like the PGA just happened," he says.

Two fellow tour players who read about Shaun's low-T in the newspaper made discreet inquiries. He says one has already been diagnosed and is electing a different treatment.

"Maybe I am a one-hit wonder," Micheel says. "Maybe that's going to be the case. I hope not. At Oak Hill, I never lost the lead after Friday--tied once or twice, but never out of the lead. I think I can do it again. What I know is, we're just people out here, going through the same things people go through. Whatever comes, I ought to be able to handle it as well as anyone."

Who else has saved two lives? Maybe even three.

Tom Callahan is a contributing editor for Golf Digest magazine