MEDINAH, Ill. -- Atop the leaderboard for the first time in a major, Luke Donald sat before a room of reporters when he heard cheers a quarter-mile away from the 18th green at Medinah Country Club.

Told that Tiger Woods had just made a birdie, the 28-year-old from England smiled and rolled his eyes.

"You expect that," Donald said.

He can expect more of the same from just about everyone at this PGA Championship, the final major of the year that is loaded with subplots and possibilities from two dozen players separated by a mere four shots. 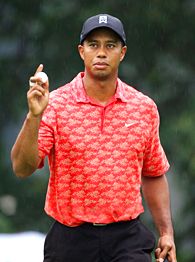 It starts with a collection of newcomers in the lead at a major.

Donald and Henrik Stenson of Sweden, trying to end a 76-year hex on European winners at the PGA Championship, each shot a 4-under 68. They were joined by Tim Herron, who finished off his 67 with a 40-foot birdie putt; and by Billy Andrade, who was at the matinee in Atlanta three days ago as the seventh alternate and now is starting to dream big after a 69.

"Why not me? Why not?" said Andrade, trying to become the first alternate to win a major since John Daly in the '91 PGA Championship. "I've worked as hard as anybody."

Their task got a little bit tougher in the final hour of a dark, gloomy afternoon outside Chicago.

Woods, scrambling for pars early before taking advantage of the par 5s, finished off his round of 68 with a 20-foot birdie putt that left him one shot behind, along with U.S. Open champion Geoff Ogilvy (68) and the resurgent Davis Love III (69).

"It's always interesting to see where Tiger is," Herron said. "He wasn't on the board most of the day. He must have done something on the last few holes."

Phil Mickelson was all over Medinah but escaped the rough on No. 18 with an approach that barely cleared a bunker and hopped onto the green to 15 feet for a birdie that gave him a 71 and put him at 4-under 140.

"They're not going to come back, obviously," Mickelson said of the 17 players ahead of him. "I need to go out and shoot a low round. Six under par tomorrow would put me right in it for Sunday."

The scores look more like the Bay Hill Invitational. But that super-sized Wanamaker Trophy sitting on a table by the first tee is a reminder that far more is at stake this week.

Pressure comes from the prize. It gets tougher looking at the number of players in contention, including former major champions like Woods, Ogilvy, Mickelson, Love, David Toms, Jose Maria Olazabal and Mike Weir.

The course is usually a factor, too, but the dynamics are far different from other majors. This isn't about grinding out pars; it's more about making birdies and not making anything worse than par.

"If I slip up at all, I could be in the middle of the pack come Sunday," Donald said.

Andrade might be the most relaxed of the bunch, since he didn't even expect to be here and has never fared well in the majors. The last time he made the cut in a major was the 2003 PGA Championship at Oak Hill -- as the seventh alternate, no less. And if he wasn't at Medinah, he'd be picking up the kids from school, cooking out and tackling a honey-do list.

"I'm 42 years old. I've been doing this for 19 years," Andrade said. "It's the PGA Championship. Why not me? Why not have fun with it and enjoy it? It's not like guys like me get in this position every single major. We have a hell of a leaderboard, and I'm looking forward to continuing to have a great time."

Herron has a little more at stake -- he is 17th in the Ryder Cup standings and needs at least a two-way tie for seventh to have a chance at making the U.S. team. Still, the rumpled one doesn't get ruffled easily. When he holed his long birdie putt to join the four-way tie at the top, he treated it like a tap-in for par.

The soft, vulnerable course yielded another record day -- 61 players under par Friday, beating the mark of 60 set the day before.

The cut was at even-par 144, matching the lowest in relation to par at a PGA Championship. It was even-par 142 at Riviera in 1995.

Still, Medinah has enough trees and water to punish mistakes, so no one was able to run away from the pack.

"There's a bunched leaderboard. You knew it was going to be that way with soft greens, and that's basically what it's turned out to be," Woods said. "You've got to go out there ... and make some birdies, and try not to give anything back."

Toms shot 67 to lead a group at 6-under 138 that included Billy Mayfair, who had surgery for testicular cancer only two weeks ago. Another shot back was a crowd that included Sergio Garcia and Weir, two central characters from Medinah in the '99 PGA Championship. Garcia finished one shot behind Woods, while Weir shared the 54-hole lead.

Those fireworks everyone expected from the marquee group of major champions finally arrived, just in time for them to go their separate ways on the weekend.

Woods got some outside help on the opening hole when his tee shot went left, hopped hard over a bunker and was headed down the slope until a fan jumped up and swatted it down. Woods still had to pitch over the trees and short of the green, saving par with a wedge to 3 feet.

The British Open champion didn't know what happened until after his round.

"I knew I got a weird hop," he said. "Hey, I appreciate it. It's nice to have Shaq out there knocking them back."

Woods holed a 30-foot birdie on the par-5 fifth, and his other two birdies on the par 5s were inside a foot. Then came the 18th, where his 20-footer barely caught the left edge of the cup and dropped.

Mickelson's birdie was far more exciting, as was just about everything he did Friday.

When his tee shot on the 18th clattered through the trees and dropped in the rough, he was fighting for par. Then came his approach, barely onto the green, and the crowd roared as he matched Woods with birdie.

"I'm fighting, man, I'm fighting," Mickelson said. "I've just got to get it turned around."

Ogilvy looked the sharpest of the three, especially with four straight birdies. He stumbled in the middle of his round but recovered with a birdie on the toughest par 3 at No. 13, and he was solid coming in for a 68.

"I can promise you, no one is scared that I'm on the leaderboard," he said.

"There's a reason why he's the U.S. Open champion," Woods said. "If there's any tournament in the world we have to grind it out, plod your way along, it's the U.S. Open, especially Winged Foot. Geoff is an extremely talented player, understands how to play major championship golf, and he's getting the job done."

For all of them, the work is only starting.