TULSA, Okla. -- When it comes to golf's major championships, the Holy Grail is the number 62. In 403 editions of Grand Slam events, it is a score that has never been matched, a score that has magical connotations in the game.

On Friday, Tiger Woods attempted to go where no one has ever gone. Woods had a 15-foot birdie putt on the 18th green that would have ended the quest for the Holy Grail. The putt looked perfect as it broke toward the cup and the murmur of the gallery surrounding the green grew into a small roar. The ball headed toward the left side of the hole, peeked in, appeared to go down ... and then, inexplicably, spun out.

The world's No. 1 golfer was no doubt in disbelief, but there was no way he was going to bemoan a 63 that left him at 6-under, the leader by two strokes at the midway point of the 89th PGA Championship.

"I hit a good putt. And I thought I made it," said Woods, who described his initial reaction as "mad" but did so with a smile on his face. "It would have been nice to have gotten a record and got a three-shot lead going into the weekend. 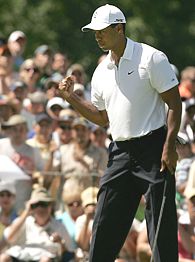 "But the good thing is I hit a good putt. And that's the important part. It just didn't go in."

Sergio Garcia would have cursed the heavens and Rory Sabbatini would have taken it as a sign that Woods is beatable. Tiger simply chalked it up to major championship deja vu.

"Nick Price did the same thing at Augusta in '86," Woods recalled. "Hit the same kind of putt and it horseshoed as well."

Yes, Woods knows his golf history. Price had one of the best chances to get to 62, lipping out a putt on the 18th green during the third round of the 1986 Masters and settling for 63, one of just two ever shot at Augusta National.

For Woods, climbing the tournament leaderboard was more important than matching the record. The 12-time major championship winner did not capture any of the season's first three major championships, his last title coming at last year's PGA. He talked earlier in the week about this being a good, but not great, year without a major title.

Now he's in a position from which he has never failed, with a chance to move a step closer to Jack Nicklaus' record of 18 majors. Woods is 7-0 when holding the 36-hole lead at a major championship.

"It certainly does give you confidence, there's no doubt," Woods said. "I know what to do. It's just a matter of going out there and doing it."

Woods has a two-shot lead over Oklahoma resident Scott Verplank and is three ahead of Stephen Ames, neither of whom has ever had much success in the majors. Geoff Ogilvy, who won the U.S. Open last year, is also three back. The only other players within six shots who have major championships on their resume are Ernie Els and John Daly.

On Friday, Woods got off to a good start with birdies on three of the first five holes, gave one back with a bogey at the seventh, then made consecutive birdies at the ninth and 10th to pull within one stroke of Verplank, who had finished earlier with a 66.

The momentum-saver of the round occurred at the par-4 12th, where Woods buried his approach in a greenside bunker and blasted out to 30 feet. From there, he rolled in the putt for an unlikely par.

He reeled off three straight birdies after that to get to 7-under for his round, then parred in for the 63.

"Obviously I had a good seat for it," said one of Woods' playing partners, Bob Tway, who shot 72. "That's why he's the best. He made it look pretty simple. Got drilled by nine [shots] today. He'll have to give me shots the next time."

And that's what makes Woods so tough in this position. He's got shots to give and doesn't have to give any.

In his PGA Tour career, Woods has won 28 out of 34 times when holding a 36-hole lead, as well as all seven in majors. And he's also got the good karma of knowing that all six of the previous major championship winners at Southern Hills held or shared the 36-hole lead.

"I guess that is kind of ominous," Ogilvy said. "But at some point he's not going to win."

Maybe not. But at some point, he may drop that putt for 62.