With one swift stroke of your putter using that crazy Claw grip of yours, you single-handedly saved the Presidents Cup.

That's right. The 15-foot birdie putt you drained on the final hole didn't just clinch victory for the United States team, it rendered the entire event meaningful once again. 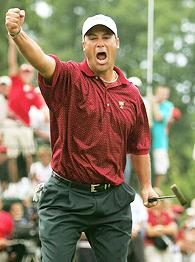 Think about the possible alternatives: You leave that putt three inches short -- just like you did on the previous hole -- and it's off to a playoff with Stuart Appleby. You lose to Appleby, Phil Mickelson loses to Angel Cabrera and, well, we've all got quite a little controversy on our hands, don't we?

After all, two years is plenty long enough to remain deadlocked. One more drawn battle and this tournament could go the way of New Coke and the XFL -- cheap copies that never lived up to the original ... and eventually fizzled without much notice.

Right in the heart of the NFL, college football and major-league baseball seasons, are fans really going to pay much attention to an event that keeps ending in a standoff?

The Presidents Cup very nearly had everyone fooled at times on Sunday. International captain Gary Player led off the TV coverage by explaining that new rules would prevent a tie this year. (Uh, not exactly.)

And when Mickelson holed a birdie putt on 18 to square that match, he removed his cap and shook hands with Cabrera, then looked incredulous when informed the game would continue. (Sorry, Phil.)

Unlike two years ago, when Tiger Woods and Ernie Els engaged in a dimly-lit playoff that proved entertaining but determined nothing, matches still halved through 18 holes while the overall result was still in doubt would continue in extra holes.

"I thought that we had won, because I'm an idiot and didn't read the rules of the game," Mickelson later said to much laughter, when explaining his final-hole reaction. "Better yet, captain [Jack] Nicklaus told me on 15 there were no ties. I didn't quite get it."

Was this Lake Manassas or the Land of Confusion?

Misunderstandings, incorrect rules interpretations ... it all seemed more WWE than PGA. And for much of Sunday afternoon, it looked like these follies would reach the forefront of any discussions about the Presidents Cup.

That's where DiMarco stepped in. The feisty Floridian prevented such rhetoric by sinking the most important putt of his life to defeat Appleby on the final hole of regulation.

Instead, the Presidents Cup took on a life of its own Sunday, stepping out of the shadows as the Ryder Cup's little cousin with its own coming-out party on the 18th green and beyond at Robert Trent Jones Golf Club.

DiMarco didn't act alone in rescuing the event, of course. Justin Leonard won his match, too. So did David Toms. And Kenny Perry, Jim Furyk and Davis Love III.

But the other heroes were Mickelson and Fred Couples. Along with DiMarco as the only U.S. players to reach the 18th hole, each made birdie where it mattered most.

Couples' moment in the spotlight was a goosebump-inducing thrill ride. All square in his match against Vijay Singh, Couples sank a birdie putt of 21 feet on the final hole, giving him a 1-up victory and rendering it the biggest shot in U.S. team competition since Leonard's Putt Heard 'Round the World at the Ryder Cup in Brookline.

Freddie held that title for all of an hour.

"The putt on the 18th was thrilling," said Couples, who was playing in his first Cup since 1998. "It was energetic, and if I could throw one word out there, it was karma."

Interesting vocabulary choice during an event that looked like it could be fraught with negative kismet for the second time around.

It's a feeling DiMarco knows all too well. One of the top 10 players in the world, he has suffered seven runner-up finishes -- including twice in majors -- since his last win in 2002. He's the hard-luck kid who never gives up, always remaining upbeat in defeat.

He knew his next win would come, someday, somewhere. But he couldn't have guessed how monumental that victory would be.

After all, Chris DiMarco may have saved the Presidents Cup on Sunday.