Tiger Woods' ailments are well-documented, starting in his collegiate days and continuing throughout his 20 years on the PGA Tour.

The following is a list of Woods' injuries and procedures throughout his career:

Tumor removal: When Woods was a student at Stanford University, he had a benign tumor removed from his left knee.

Cyst removal, fluid drain: In December 2002, Woods had a benign cyst removed from his left knee and fluid drained from around one of his ligaments. He returned to play at the 2003 Buick Invitational, which he won. 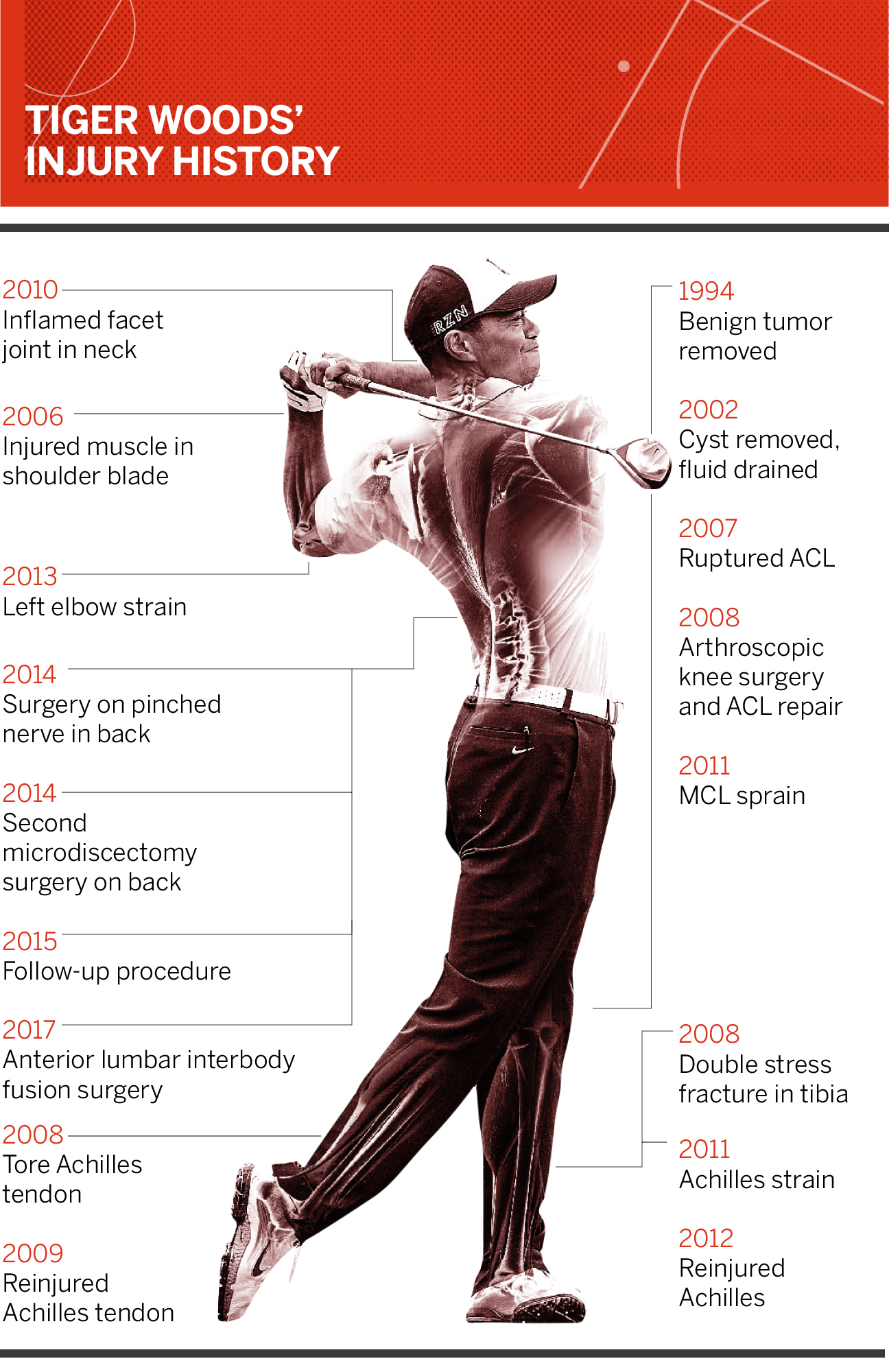 Ruptured ACL: Woods ruptured the anterior cruciate ligament in his left knee while at home running after the 2007 British Open but decided against surgery. He then went on to win five of his next six events.

ACL repair: Woods had reconstructive surgery on the damaged ACL and missed the remainder of the 2008 season. In addition to the ACL problem, Woods also had a double stress fracture in his left tibia as a result of preparation for the 2008 U.S. Open.

Apparent neck injury: Woods was forced to withdraw from the Players Championship during the final round with a neck injury. An MRI revealed that Woods had an inflamed facet joint in his neck.

Left MCL sprain, strained left Achilles tendon: Tiger Woods announced he will miss the Wells Fargo Championship in North Carolina. Woods suffered a Grade 1 mild MCL sprain to his left knee and a mild strain to his left Achilles tendon while hitting a difficult and awkward second shot from the pine straw under the Eisenhower tree left of the fairway at No. 17 during the third round of the Masters. Woods was able to continue playing at Augusta and then later decided to seek a medical evaluation.

Knee, Achilles act up: Woods withdrew from The Players Championship with apparent injuries after nine holes (shot 42). "The knee acted up, and then the Achilles followed after that, and then the calf started cramping up. Everything started getting tight," he said. Woods didn't play again until WGC-Bridgestone Invitational in August 2011.

Injury to left Achilles tendon: Woods withdrew from final round of WGC-Cadillac Championship.

Back issues: Woods withdrew from the final round of The Honda Classic.

Back surgery: Woods announced he would miss the Masters after undergoing a microdiscectomy for a pinched nerve, which had been hurting him for several months. Woods said he would return to golf "sometime this summer," which he did in late June at the Quicken Loans National.

Back surgery: After missing the cut in three of the four majors of 2015 but posting his best finish of the year in his final start, in August, Woods underwent a second microdiscectomy surgery and said he hoped to return in "early 2016."

Back procedure: About a month after his second back surgery in a year and a half, Woods announced that he had undergone a follow-up procedure to relieve discomfort in the area. The procedure was performed by Dr. Charles Rich, the same neurosurgeon who performed the previous two surgeries.

Back spasms: Woods withdrew before the second round of Dubai Desert Classic citing back spasms. Woods' agent, Mark Steinberg, said at the time that the problem was not related to nerve issues that plagued the 14-time major champion over the past few years and resulted in three surgeries, the most recent coming in August 2015.

Woods announced he underwent successful back surgery to alleviate ongoing pain in his back and leg. "The surgery went well, and I'm optimistic this will relieve my back spasms and pain," Woods said via his website. "When healed, I look forward to getting back to a normal life, playing with my kids, competing in professional golf and living without the pain I have been battling so long."