<
>
Mickelson in striking distance after 1-under 69
5yBob Harig
Majors, wins and Olympics: What to expect from Tiger in 2020
4dESPN.com
Tiger 3 off lead at Torrey Pines after opening 69
11hBob Harig
McIlroy opens hunt for No. 1 ranking with 67
11h
Korda shoots 66, takes 2-shot lead in Boca Raton
11h
Gulbis to retire at end of 2020 LPGA season
17hBob Harig
Pieters shoots 67, leads by 1 at Dubai Desert
20hAssociated Press
Wolfe wins in Bahamas for first Korn Ferry title
2d
McIlroy surprised by return to cusp of No. 1 rank
2dBob Harig
What will happen in golf in 2020 according to The Caddie
2dMichael Collins
Spieth seeks to end slump, get off to solid start
3dBob Harig
Tiger: Not feeling rusty heading into '20 debut
3dBob Harig
Golf Hall induction age to 45; Tiger eligible in '21
3dBob Harig
Augusta National like you've never seen it before (with hints of possible changes?)
4dBob Harig
Jun 18, 2015

UNIVERSITY PLACE, Wash. -- He left a few putts out there and failed to pick up any birdies on his way in at Chambers Bay, but Phil Mickelson had difficulty finding too much fault with his opening round in the 115th U.S. Open.

"I shot under par the first day of the U.S. Open,'' Mickelson said after a 1-under-par 69 had him four strokes behind earlier leaders Dustin Johnson and Henrik Stenson. "The first round was the round I was going to be most nervous at, getting started. You don't want to have to fight to come back all the time.

"You want to get off to a solid start around par. And I got off to a good start and shot 1 under. Made a couple of bogeys coming in. The one on 14 was a good bogey, I'll gladly take that. But really pleased to be under par after the first round.''

Mickelson, 45, is playing in his 25th U.S. Open, and he holds the record for most runner-up finishes in the championship with six. It is the one tournament he needs to complete a career Grand Slam.

Lefty put himself in good position by playing the front nine in 32, making three birdies and leaving a couple of other birdie opportunities on the course. After a bogey at the 10th, he rebounded with a birdie at the 11th, but he couldn't get another the rest of the way.

At the drivable par-4 12th, where a 270-yard tee shot was needed to reach the front of the green, Mickelson elected to lay up with a 6-iron off the tee. But he wasn't able to wedge it close enough for a birdie, then followed with consecutive bogeys.

"I also felt at 3 under I don't want to have one hole ruin my round. I hit one bad drive and go in the junk and I make a 5 or a 6, it just hurts the round. I didn't want one hole to come up and bite me.''

The par, however, seemed to derail any momentum, as Mickelson struggled on the next two holes. He needed to make a 15-footer at the 14th just to save bogey.

He parred in from there to shoot in the 60s for the eighth time in the opening round of the U.S. Open. Four of the previous times he finished seventh. 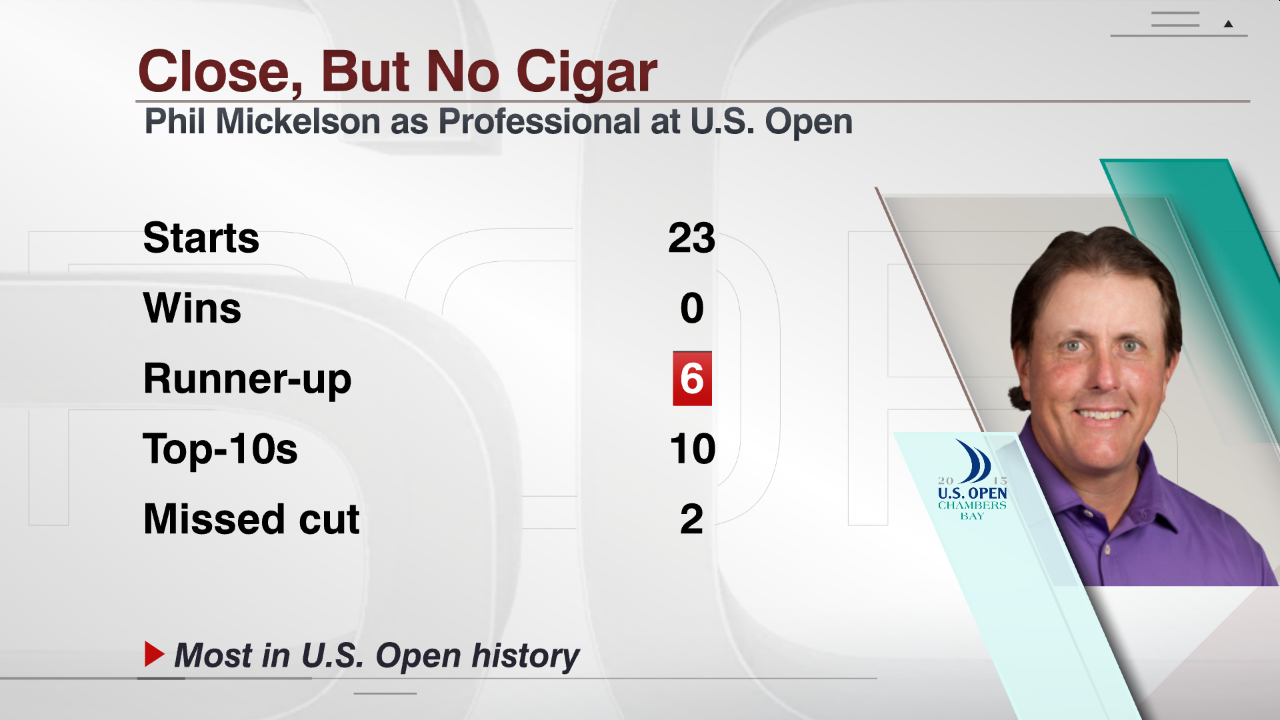 "I would love to see Phil Mickelson win this week,'' said Gary Player, 79, who is celebrating the 50th anniversary of his U.S. Open victory in 1965 at Bellerive Country Club -- which helped him complete the career Grand Slam. "The reason that he is the best [public relations] pro playing the tour today, he takes his time in signing all the autographs, in dealing with the public correctly. His behavior is impeccable.''

Only Gene Sarazen, Ben Hogan, Player, Jack Nicklaus and Tiger Woods have won each of the four major championships in their careers.