UNIVERSITY PLACE, Wash. -- In the end, there was little left for Tiger Woods to do but laugh at himself.

"The bright side is at least I kicked Rickie's butt today," Woods said after his worst round ever in a U.S. Open, a 10-over-par 80 at Chambers Bay that did -- by one shot -- beat one of the pre-tournament favorites, Rickie Fowler.

Clearly, Woods' game is no laughing matter at the moment. This is the second straight tournament in which he has shot a round in the 80s and the third time in 2015. That's more scores than he has in the 60s (two).

Coming into 2015, Woods had just a single score of 80 or higher as a pro -- at the 2002 Open Championship in a terrible weather storm.

"Not very happy, that's for sure," said Woods, who is tied for 152nd, with just Fowler and club pro Rich Berberian behind him. "Got off to a bad start. I stuck that 6-iron in the ground on the first hole and then just couldn't quite get it turned around today."

As was the case two weeks ago at the Memorial, Woods had a horrific time off the tee. When he missed a fairway, it was typically way off.

After making his first birdie of the day -- a 4-footer at the 16th hole -- Woods had a chance to break 80 by parring in. He parred the 17th then hit one of his best drives at the par-5 18th. With a chance to get the ball near the green in two, he topped into a bunker and made a bogey.

This was, again, in contrast to his warm-up session and most of his practice leading up to the first round, where he showed little, if any, of the wild, jaw-dropping shots that he hit Thursday.

"It's one of those things; just got to work through it," Woods said. "I'm trying as hard as I can to do it, and for some reason, I just can't get the consistency that I'd like to have out there."

He said there and again this week that he needed to go through the rough times to get better. Woods began working with his fourth swing coach as a pro in November, and lack of play due to injuries and poor form has kept him from getting the tournament consistency he needs. Woods said again that he is committed to the process he is undertaking.

"Yeah, I am. I am," he said. "I know when I do it right, it's so easy. It just feels easy to control, easy to do it, easy to hit all my shots. I just need to do it more often and build from there."

Woods had a triple-bogey, eight bogeys and a single birdie. He hit just six fairways and nine greens in regulation and took 36 putts.

Making the 36-hole cut would be a major long shot, meaning Woods would miss the cut at the U.S. Open for just the second time as a pro. The other time came in 2006 at Winged Foot, where he was playing for the first time after the death of his father, Earl.

Woods is an even longer shot to win the tournament, with the Westgate Las Vegas SuperBook updating his odds to 1,000-1 after Thursday's round.

It would be the 14th worldwide missed cut in his career -- matching his major championship total of victories.

Woods is playing his sixth tournament of 2015, which includes a missed cut, a withdrawal and a tie for 17th at the Masters. He is ranked 195th in the world, will fall out of the top 200 if he misses the cut and admits the lack of golf is hurting him.

"I haven't played enough," he said. "I haven't had a rhythm to play. I didn't play much last year, and I haven't played much this year. Knee surgeries are pretty easy compared to a back surgery, the recovery time. And for some reason, it's just a lot harder dealing with a nerve than a joint."

Information from ESPN.com's Darren Rovell was used in this report. 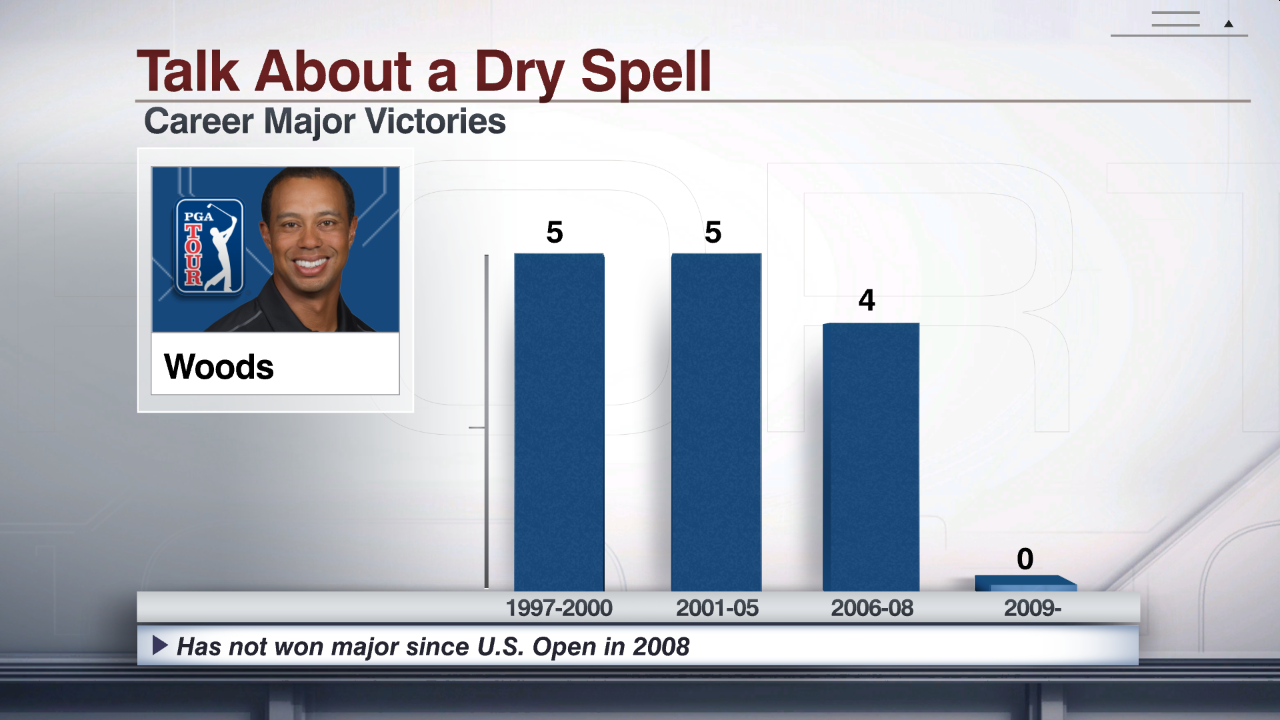