The ominous reports about his demise notwithstanding, Tiger Woods is going to play golf again. At what level and how well and for how long are all questions that have no answer as he turns 40 -- his age alone leading to as many doubts as the three back procedures -- making his return a mystery.

But Woods never said he was done, pledging to come back at some point, presumably after he takes plenty of time to recover from his latest surgery in October, the third in 18 months.

Woods was unable to offer a timetable on when he could even begin rehabilitation, let alone swing a golf club, leading to understandable doubts for the 14-time major champion. Getting healthy is clearly priority No. 1 and short of that, nothing else really matters.

Woods' ability to overpower a golf course as he did early in his career is no longer as pronounced, certainly not now with back issues seemingly limiting his ability to swing with such force -- even though he was hitting 300-yard-plus drives in his last tournament at the Wyndham Championship in August.

But there has long been conjecture in golf that Woods can dial it back, not seek the distance off the tee that he still possessed in an injury-plagued season. He could better manage his game and maybe, just maybe, lessen the physical toll. 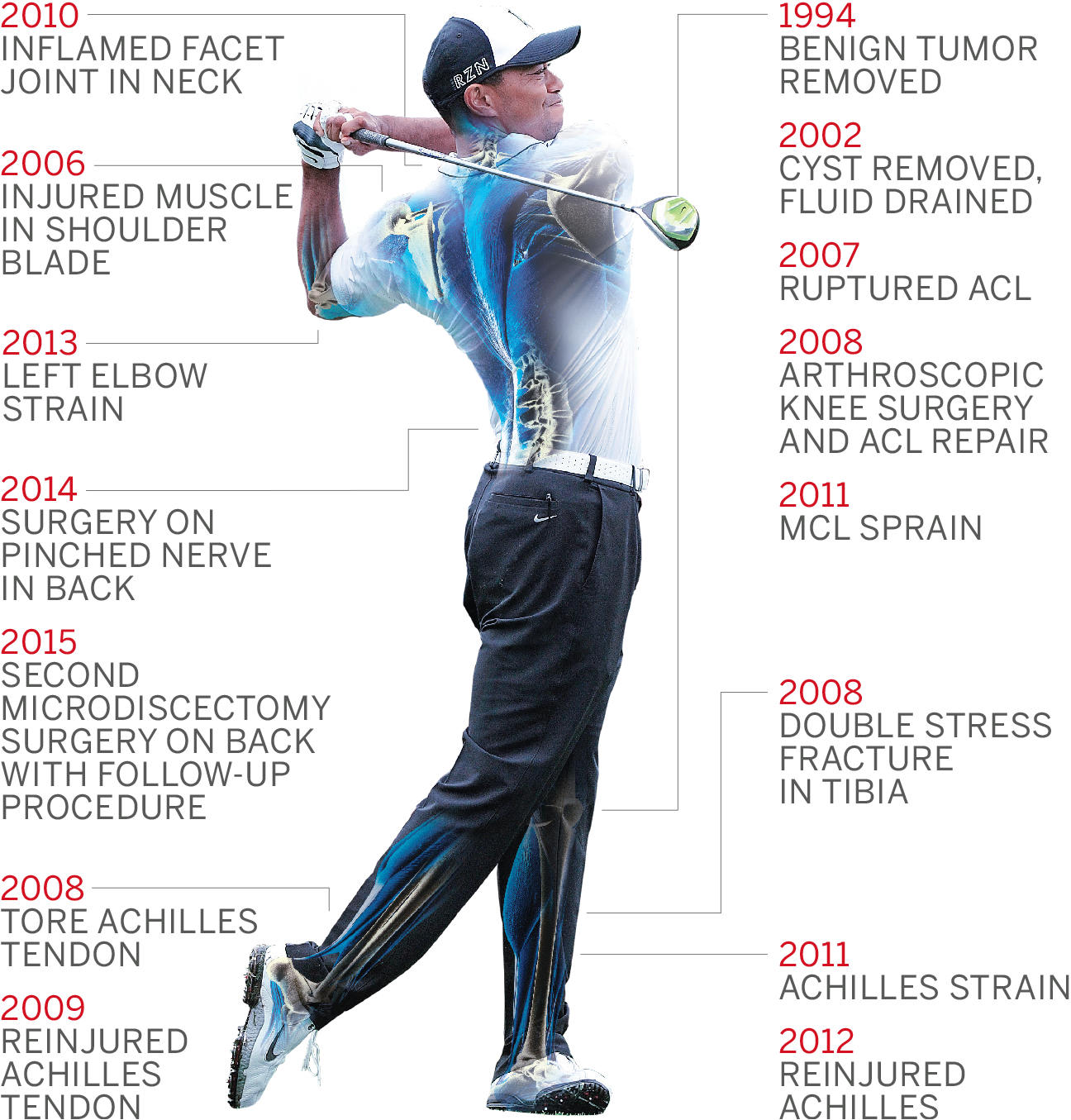 -- Tale of the tape of Tiger Woods' injuries.

"All athletes have to face that,'' Woods said during a recent interview. "But the neat thing is that golf offers so many different avenues, so many different ways to get it done. Hopefully I can be more efficient in other parts of my game.''

"If I don't hit it as far, hopefully hit more fairways,'' Woods said. "Understand how to play more iron shots into the correct spots. I've learned a few more shots around the greens in the past couple years. Implement those in my short game. [With my] putting ... some of the things I was working on at the end of the year were starting to click.

"It's putting all those things together. The game is so fluid. That's the thing I need to be aware of going forward.''

In essence, Woods is talking about reinventing himself. Whether he really believes that, or will seek to follow that path, is purely conjecture. There would seemingly be many steps to take in his recovery before implementing any kind of game plan. But there is certainly a sense that he can do so if he chooses -- and find success.

"He has to reinvent himself to an extent,'' said Hank Haney, one of Woods' former instructors. "And he's done that to a degree. He played [some of] his best golf [in 2015] at Greenbrier (T34) and Greensboro (T10). These are two short golf courses. Greensboro was a course where he had to hit very few drivers and there weren't as many chances to hit it on a hazard or out of bounds. That's a reinvention. In the past, you wouldn't have said that was a perfect course for Tiger.

"Let's assume his back is better and he can practice. The biggest thing standing in the way -- assuming he can do all those things, which right now is a big assumption -- you have to be able to scramble. You can't be last. That won't get it. That's a problem that didn't get fixed and it doesn't just go away because you don't practice.''