This story appears in the 20th anniversary issue of ESPN The Magazine. Subscribe today! You can also catch our full Tiger Woods interview on "Marty Smith's America, Golf Edition" on Thursday at 7:30 p.m. ET on ESPN.

The most dominant athlete of ESPN The Magazine's 20 years won 13 majors from 1999 to 2008, 10 more than any other golfer. Ahead of the Masters ("SportsCenter @ The Masters" coverage begins Wednesday, April 4, on ESPN, WatchESPN and the ESPN App), Tiger Woods sat with ESPN's Marty Smith to discuss what made him great, and how close he is to being great again.

Question from Marty Smith: What did it mean to you to learn that ESPN The Magazine named you the most dominant athlete of the past 20 years?

In celebration of ESPN The Magazine's 20th anniversary, Peter Keating crunched the numbers to find the most dominant athletes of our time.

The biggest questions we know you have about our list

Smith: What made you so unstoppable for so long?

Woods: I just wanted to beat you.

Smith: It can't be that simple.

Woods: It really is, it really is. When I compete, I get immersed in the competition of it, and I love not just to win, but I love to beat people. And I love to go head-to-head, eyeball to eyeball, let's see who flinches first. And that has kept me going, I think. Has it driven me sometimes too far? Yeah, it has. I've caused myself some bodily harm because of it. I have pushed my body beyond its limits. I wish I had a little more of a governor. But on the flip side of it, I don't think I would have won by the margins that I've been able to win by.

Smith: What do others not know that helped you be so dominant?

Woods: Well, I think it's all the work I did, in the house, working in front of the mirror chipping. It'd just drive my mom crazy when I used to put her crystal up on a table and I used to hit flop shots over it -- now, that's real pressure, by the way. So, it's just the amount of work that I put into it outside of what people saw during the 18 holes of competition that one particular day. I put in so much effort and so much time to becoming good.

Smith: What moment or shot do you remember when you knew you were great?

Smith: I love to have conversations with great athletes, coaches about the impact of their dads. And yours is well-documented. What are your sweetest memories of your dad?

Woods: One of my favorite times was when we used to go back on ... it used to be called the Old Back Nine. It was part of the original 18 holes at the Navy golf course I played in Long Beach, and so we would go to the Old Back Nine and go way off in the corner and we would just hit balls late in the evening. And he would be working on his game and I would be working on mine. And there would be no talking, because the true litmus test is going to be Saturday and Sunday, who was going to beat who. And he has to get ready to beat his little son, and I was getting ready to, you know, kick my dad's butt. 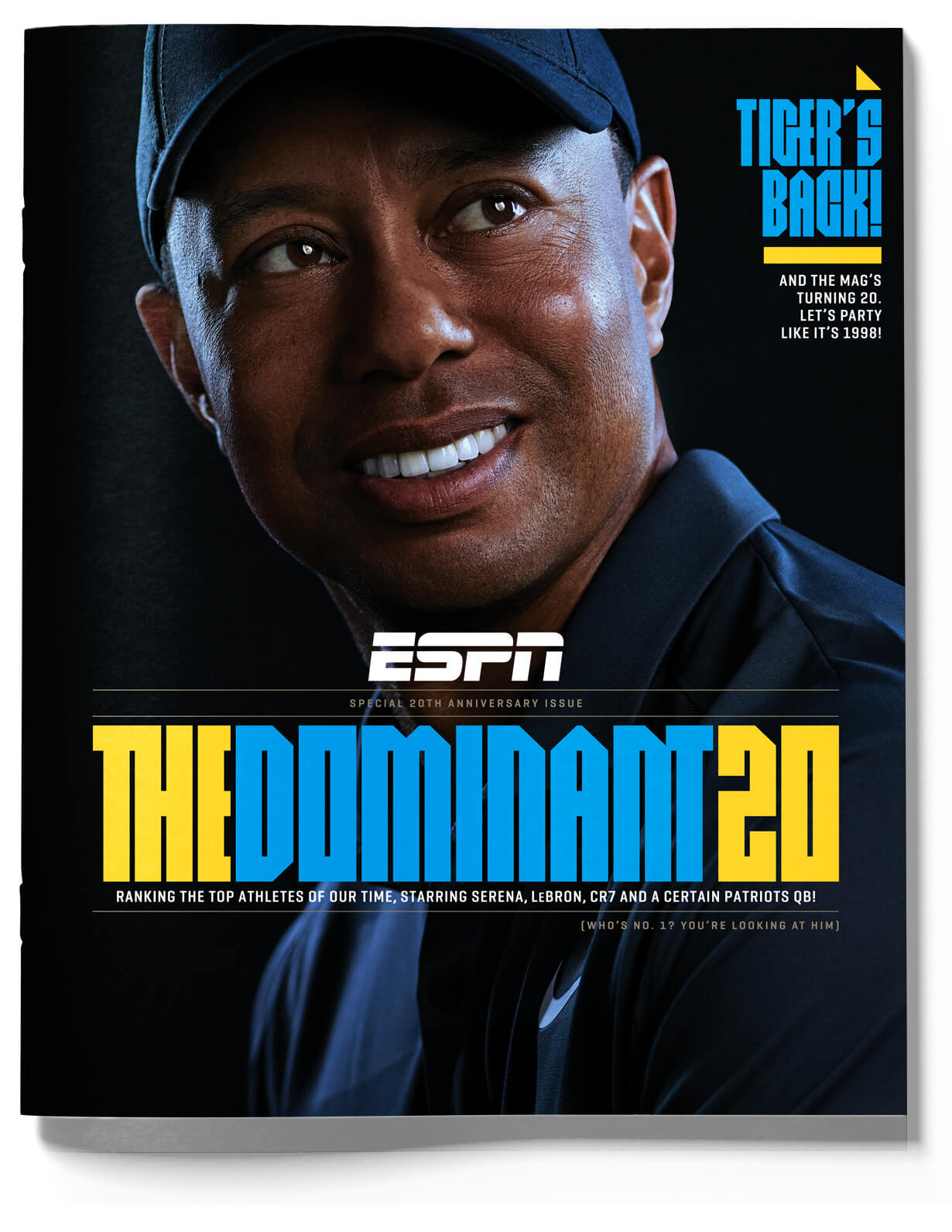 The 20 most dominant teams of the past 20 years

Another good story: I was too young to play at the Navy golf course -- you had to be 10 or older -- so I used to get dropped off at the front gate. Then I would walk into this ditch that ran alongside the clubhouse. And I'd lay in the ditch ... and I'd camouflage myself with dirt and debris and bushes, and I'd lay there ...

Smith: I know Rory McIlroy is a buddy of yours. What defines true friendship for you?

Woods: I can trust them with anything. I can tell them just about anything and it never leaves that person.

Smith: How many friends you got?

Woods: About a handful.

Smith: How do those people ebb and flow when you have your stature, your career, your accolades, your name. How does that work?

Woods: I think three of them I've known since childhood, so we've grown up together. And then, over the years, I've had people come in and people leave. Life changes, life evolves. My life has certainly changed and evolved. And same thing with my friends.

"For the better part of four to six months, I had to be helped out of bed every day. And there were some days where even if you helped me, I couldn't stand up. I'd have to just either fall to the floor or just stay in bed." Tiger Woods on the low point of his recovery from back issue

Smith: One thing that I can't stand about myself is that I care what people think. I wish I didn't, but I do. How much do you care?

Woods: A lot less than people might think. I really do care about how the people I love and trust view me. But that's as far as it goes.

Smith: Certainly some of those people are your [two] children.

Smith: How has fatherhood affected your worldview?

Woods: It's changed it dramatically. You know, my off time used to be spent playing golf, thinking about golf. When I just had my kids, I didn't really do that as much. They are the most important things in my life, and so I do anything and everything I possibly can to help them and guide them and teach them. Golf took a back seat to that. But, more importantly, my health has been the No. 1 thing that's guided me, because I want to be healthy for my kids. I couldn't play with them anymore. It really sucked to not be able to play soccer with them, throw a ball around, lay on the floor, play LEGOs, do all of those things that every other parent gets to do. But I just couldn't do it. My back was so bad.

Smith: In what areas in your life are you growing the most right now?

Woods: I'd have to say one is understanding my new body. I'm able to play golf again out here with my buddies. I missed that so much. I used to bring my son out here, and he'd play and I couldn't because I couldn't swing a golf club. I could barely ride in a golf cart. And for a game that has been a part of my life since I could, you know, as far as I can remember, that was very disheartening. It hurt. I hit some pretty low periods, and I've finally come out on the other side.

Woods: The low periods were ... for the better part of four to six months, I had to be helped out of bed every day.

Woods: And there were some days where even if you helped me, I couldn't stand up. I'd have to just either fall to the floor or just stay in bed. That was a tough part of my life.

Smith: Rory told me that he thinks you have five years left in you and that you're this close to winning now. Thoughts?

Woods: I am pretty close, I think, to putting it all together. It's like riding a bike, but it's a new bike. It's a new body. I know what to do. I know what I can do. But it feels different, and that's one of the things I'm still getting used to.

Smith: For a layman, what is the difference between when you struggled and now that you're back?

Woods: The easiest thing is I have no more pain in my lower back. Difference is, I don't have the same range of motion. I'm stiffer there. My angles that I used to hit on the golf course, the angles I used to create with my body, I can't do that anymore. And, so, I'm learning to do it a different way. I have the speed, I have the pop, but it's done differently. I feel pretty good about it, but I'm not quite there yet.

Marty Smith is an ESPN reporter and host of Marty Smith's America. To catch the full Tiger interview, tune in March 31 at 4:30 p.m. ET on ABC.