NASSAU, Bahamas -- Known for his proclivity to play golf fast if not well, George H.W. Bush would not slow down the pursuit of an 18-hole round just because he was in the company of Tiger Woods.

On a visit to Bush's hometown of Houston years ago to work with instructor Butch Harmon, Woods had the occasion to play with the 41st president of the United States. And as tributes poured in after Bush died at age 94 on Friday, Woods chuckled at the memory of their speedy round.

"It was one of those very quick ones,'' Woods said at the Hero World Challenge on Saturday. "Eighteen holes in probably under two and a half hours. I met him on numerous occasions. He was fantastic to be around. He was just one of the smartest people I've ever been around. So down-to-earth.''

Golf and our country lost a true gentleman and a friend. I had the honor of playing golf with President Bush and he joined us at our inaugural event in DC in 2007. He was also an integral part of the Presidents Cup. Mr. Bush accomplished so much in his life and will be missed. pic.twitter.com/XzrgZqtea3

Bush was a big contributor to golf, especially after leaving the White House in 1993. He was elected to the World Golf Hall of Fame in 2011 through the Lifetime Achievement category. The United States Golf Association bestowed its highest honor on Bush in 2008, the Bob Jones Award. The PGA of America gave him its Distinguished Service Award in 1997, and the PGA Tour honored him with its Lifetime Achievement Award in 2009.

Bush, who played baseball at Yale, did not take up golf until he was in his 20s, but became quite competitive at the sport. He also had family ties to it. His grandfather, Herbert Walker, was USGA president in 1920, and the Walker Cup -- an amateur biennial competition between the United States and Great Britain & Ireland -- was named after him. Bush's father, Prescott, was USGA president in 1935.

Bush was the first honorary chairman of the First Tee, a program started in late 1997 that gives golf opportunities and teaches life lessons around the country.

"Obviously his name is synonymous with golf,'' Woods said. "Being around him for all these years and getting a chance to be around him at the Presidents Cup and him being involved since its inception in '94 ... he was such a class act. Anyone who's ever been around him knows how much he loved his golf and how much he supported it and how much we're going to miss him.''

Bush attended several Presidents Cups and Ryder Cups over the years; he was at the former the first time it ventured outside the United States in 1998.

Jack Nicklaus, who captained the U.S. team that year (the only time it has lost in the competition), took to Twitter on Saturday to share a story from that event, which was played at Royal Melbourne in Australia. 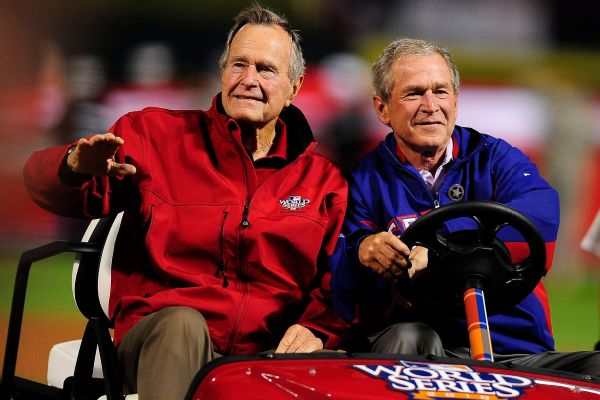 George H.W. Bush, whose presidency soared with the coalition victory over Iraq in Kuwait but plummeted in the throes of a weak economy that led voters to turn him out of office after a single term, died Friday at 94. ABC News takes a look at his life: Full story

"On the final day, President Bush stood on the first tee to greet all 24 players,'' Nicklaus wrote. "From (the) first singles pairing until the last, the temperature dropped 40 degrees & with it came steady rain. President Bush stood in pouring rain & shook every hand -- with grace & a big smile. To me, it spoke volumes about his enduring and endearing character.''

For Bush as a player, what stood out to just about everyone who came in contact with his game was the fast pace.

Bush once told a group of kids at a First Tee program that he never wanted to see them plumb-bobbing a 3-foot putt. And as the 41st president told ESPN writer Don Van Natta Jr. for his book "First off the Tee,'' the family mantra was: "We're not good, but we're fast.''

Bush played a lot of his golf at Cape Arundel Golf Club in Kennebunkport, Maine, where he became proficient enough to win the club championship in 1947. Perhaps his most famous round of golf came in 1995 as part of the Bob Hope Desert Classic at Indian Wells Country Club near Palm Springs, California. For the pro-am, PGA Tour pro Scott Hoch was grouped with Bush, sitting president Bill Clinton, former president Gerald Ford and Hope. During the round, which was filled with errant shots, Bush hit a couple of spectators, one of whom was bloodied when a shot caromed off a tree and hit her on the nose.

Perhaps most horrifying of all to Bush? The round took more than six hours.