Birthdays have not served as great benchmarks of late for Tiger Woods, especially as he passed into that "twilight'' area of his career where the days grow shorter and the opportunities more fleeting.

Athletes in their 40s already face long odds of success, and Woods' plight has been made all the more onerous due to four back surgeries, the most recent of which occurred when he was 41 and already facing an uncertain future.

But after Woods celebrated his 43rd birthday on Dec. 30, and is set to begin his 2019 season this week at the Farmers Insurance Open, prospects have not looked this bright in years. Woods is ranked 13th in the world -- he was 13th, too, after winning the Tour Championship in September for his 80th career PGA Tour victory.

With a strong performance or two early in the new year, it's not unreasonable to think that Woods could be back among the top 10 in the world for the first time since he dropped out more than four years ago. 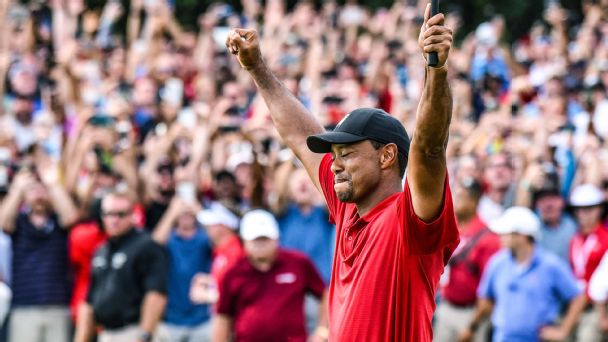 Take a deep look into Tiger Woods' remarkable return to the highest levels of golf thanks to never-before-seen content.

It's possible, if perhaps not probable.

"If he could make it back to No. 1 in the world, that would be an incredible accomplishment,'' said Hank Haney, Woods' coach from 2004 to 2010 -- a period that never saw Woods fall below third.

"I think [Jack] Nicklaus' record [of 18 majors] is the ultimate, but so far out there [Woods has 14]. But I think No. 1 is there to be had. He has a relatively easy path. He doesn't have all these points [that he can potentially lose] that all these guys have. So it's easier to climb in the rankings.''

Easier. But not easy.

Woods' rise was swift in 2018 because he started from so far back. He need only look at Jason Day to see how tough a task it is to climb to the top when you are so close.

The Australian who spent considerable time at No. 1 in 2015-16 started the year ranked 13th. He won twice -- once more than Woods -- and finished at No. 14th. So Woods needs a year better than 2018, which was deemed wildly successful.

Brooks Koepka, who ended 2019 as the No. 1-ranked player in the world after a season in which he won two major championships as well as another PGA Tour event, has traded the top spot with Justin Rose four times in recent months.

Woods holds records for the most consecutive weeks (281) and total weeks (683) at No. 1 but has not been there since March 2014, following the WGC-Cadillac Championship at Doral, his last tournament before the first of four back surgeries.

From that point, it was a losing battle for Woods to get and stay healthy, as he gradually fell down the rankings list. He was 32nd at the end of 2014; and after playing 11 times in 2015 and having two more back surgeries, he was 416th at the end of the year as he was turning 40.

The slide continued as Woods played no official events in 2016, had a three-tournament comeback late in the year and into 2017, dropping all the way to 1,199th.

A tie for ninth last December at the Hero World Challenge boosted Woods back into the top 1,000 and he was 656th when he began 2018, becoming the player now ranked among the top 100 in the world who made the biggest leap.

"The expectations are much different this upcoming year,'' Woods said. "Now I know that I can do it, now it's just about managing and making sure I'm fresh for events because I know I can win tournaments again.''

Woods has typically maintained that the ranking takes care of itself. Win enough, contend enough, finish high enough, and getting there will happen.

And so while it is certainly possible for Woods to again be atop the rankings, it will take some work. Certainly more success than he had in 2018, when he won once, twice finished second, including a major championship, and posted a total of seven top-10 finishes.

He cracked the top 100 for the first time after the Masters, and got to No. 50 when he tied for sixth at The Open. His tie for second at the PGA Championship got him to 26th and the win got him in the top 20.

As impressive and unexpected as all that was, Woods was also doing it with a virtual clean slate in regard to the Official World Golf Ranking, which operates on a two-year rolling period, with most weight given to the most recent 13 weeks.

That means, however, that over time a player sees his points reduced in increments. Because Woods had rarely played over the previous two years, he was mostly just adding -- not losing -- points.

As 2019 unfolds, he will see the impact of that in his rankings. He can obviously earn more points than he loses by continuing to play well, but he is more likely to drop spots if his play does not keep up.

It is almost impossible to quantify exactly what Woods needs to do to get back on top. Obviously rattling off a five-victory season -- which included the Players Championship and two World Golf Championship titles -- as he did in 2013 could do it.

He probably needs some kind of combination of four victories in regular tournaments or perhaps a major or WGC win (where more world ranking points are offered) and a handful of top-10s.

If you want a more technical answer and are well-versed in the workings of the OWGR, here is one way to look at it, according to Ian Barker, director of data services for the European Tour, which helps administer the ranking system.

Barker explained that Woods will have a minimum of 174 world ranking points as of April 14, 2018 -- the Sunday of the Masters. He is at 219 now. And his tournament divisor will stay at a minimum of 40. (Players who play fewer than 40 times in a two-year period are given the minimum.)

How would he do that? Well, by winning often. As Barker points out, that probably would require three big wins at tournaments such as WGC-Mexico (probably 72 points to the winner), Arnold Palmer (60), the Players Championship (80), the WGC-Dell Match Play (74) and the Masters (100) would all offer those opportunities.

Here's another way to look at it:

Following the 2011 season -- when Woods had sunk as low as 58th -- he finished at No. 23 following a victory at the Hero World Challenge to end the year. In 2012, he played 22 worldwide events, with three victories, two missed cuts and a withdrawal and nine other top-10s.

That helped him get as high as No. 2 and he finished the year at No. 3. Then he got to No. 1 again in 2013 after winning the Arnold Palmer Invitational -- his third victory of the year -- and stayed there through the WGC-Cadillac Invitational in 2014.

Woods' back problems led to surgery, a hasty comeback and mostly poor play for the rest of 2014 and 2015 -- when he posted a single top 10, in his last event, and missed the cut in three majors.

When he tied for 10th at the 2015 Wyndham Championship, Woods was 257th in the world and continued to keep dropping until his most recent comeback.

Put in perspective, it is remarkable he has come this far.

Can he get all the way back? Well, Koepka, Justin Rose, Dustin Johnson, Justin Thomas -- to name four who all held the No. 1 spot in 2018 -- as well as the likes of Bryson DeChambeau, Jon Rahm, Rickie Fowler, Jordan Spieth and Day might all have something to say about it.

At this time last year, Spieth was second and has dropped to 16th, so it can go the other way. Then again, Bubba Watson began the year at 89th, won three times, and is now at 17th -- which is still four spots below Woods.

The bottom line is this: Woods can get to No. 1, but he's going to probably need at least three victories and a slew of high finishes.

That might be a lot to ask -- and would obviously position him well for 2020 -- but just getting back to the top 20 and being part of the discussion going into 2019 is impressive.

"I know that I can win because I just proved it,'' Woods said. "It's just a matter of getting everything peaking at the right time.''