AUGUSTA, Ga. -- As Tiger Woods stood in the pine straw along the left side of the 14th fairway during the first round of the Masters at Augusta National Golf Club on Thursday, he had two options: Punch out his ball after a wayward tee shot or rip an iron and try to reach the green.

Two years ago, before Woods nearly lost his right leg in a car accident, there would have been no question about what he would do. But now, after surgeons pieced together his severely damaged right leg, foot and ankle with a rod, plates and screws, there had to be some doubt creeping through the 15-time major champion's mind.

Tiger's Opening Round By The Numbers 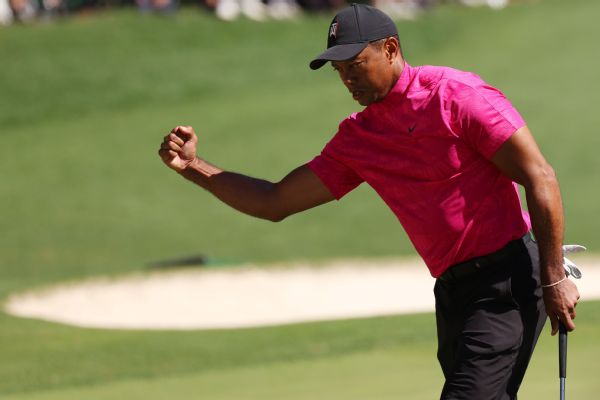 3: Consecutive opening rounds at Masters that Tiger has shot under par, matching longest streak of career there (2009-11)
7: Up-and-downs, tied for his most scrambles in a single round at Masters since ShotLink tracking began in 2003
8: Fairways hit of 14
9: Greens hit, fewest in a round under par at Masters since 2003
11: Times Tiger has shot under par in an opening round at Masters (finished inside top 10 in 9 of the previous 10 instances, including 4 of 5 wins)
27: Putts needed, including 13 on first nine holes
283.3: Average yards of distance off tee

Would Woods slip in the pine straw? Would he be putting too much torque on his surgically repaired right leg by swinging so hard?

Woods pulled off the shot, and his ball settled just over the back of the green. He ended up bogeying the par-4 14th hole to drop back to even par. But that shot, perhaps more than any other for him Thursday, showed how far Woods has come in the 14 months since his wreck.

And it showed that Woods, 46, might very well be a contender to win his sixth green jacket this weekend, which would tie him with Jack Nicklaus for most ever.

In his first competitive round of golf in 509 days, Woods shot 1-under 71 in the first round. He was 3 shots behind Cameron Smith after finishing his round; Sungjae Im later took the Day 1 lead at 5 under.

Tiger with a classic fist pump after long birdie putt

Tiger Woods drains a long birdie putt on the 16th hole at the Masters.

It was Woods' first tournament round since he was seriously injured in a car accident outside Los Angeles on Feb. 23, 2021. He hadn't played in an official event since November 2020, when he tied for 38th at the Masters, which was played later that year due to the COVID-19 pandemic.

"I am as sore as I expected to feel, but it was amazing," Woods said. "Like I was telling the team all week, come game time, it will be a different deal. My adrenaline will kick in. I'll get into my own little world, and I'll get after it. It's about the training that we've done to have the stamina to go."

Woods got to 1 under with a 29-foot birdie putt on the par-3 16th hole. Just as the ball dropped in the hole, he raised his right fist to the crowd.

It was an up-and-down round for Woods. He hit 8 of 14 fairways and 9 of 18 greens. He needed just 27 putts, including 13 on the first nine holes. He averaged 283.3 yards off the tee and badly pulled four of his drives left. He was even par on the four par-5 holes and 2 under on the four par-3s.

"To finish in the red today after as long a layoff as I've had and not being in competitive golf [is good]," Woods said. "I know where to hit it [on] a lot of these pins, and I miss in the correct spots and give myself good angles. I did that all day, and I was able to make a few putts and end up in the red like I am now."

Just like in practice rounds earlier this week, thousands of patrons followed Woods and his playing partners, Joaquin Niemann and Louis Oosthuizen. Woods' birdie putts on the sixth, 13th and 16th holes were followed by roars that had been missing at Augusta National during the COVID-19 pandemic the previous two years.

"That's something I'm very lucky to have this opportunity to be able to play, and not only that, to play in the Masters and to have this type of reception," Woods said. "I mean, the place was electric. I hadn't played like this since '19, when I won, because in '20 we had COVID and we had no one here, and I didn't play last year [when attendance was limited]. So to have the patrons fully out and to have that type of energy out there was awesome to feel."

Given where Woods was in February 2021 and where he is now, he isn't looking past what he accomplished just by playing on Thursday.

"If you would have seen how my leg looked to where it's at now, the pictures ..." Woods said. "Some of the guys know. They've seen the pictures, and they've come over to the house and they've seen it. To see where I've been, to get from there to here, it was no easy task."

It was a solid start for Woods, who last won at Augusta National in 2019. In his previous 23 Masters appearances, Woods broke 70 in the first round only twice. His 71.8 scoring average in the opening round is a full shot higher than his second-round average and 2 strokes higher than his third-round average.

Of course, those statistics came from rounds Woods played before his car wreck. His ability to bounce back and his stamina will play a big role in whether he contends for a sixth green jacket.