WASHINGTON -- Disabled golfer Casey Martin may use a cart to ride in tournaments, the Supreme Court ruled Tuesday, saying federal law requires a leveling of the playing field for the handicapped, even in pro sports.

The decision means the PGA Tour must make allowances for Martin, whose degenerative leg ailment makes it almost impossible to walk an 18-hole course. 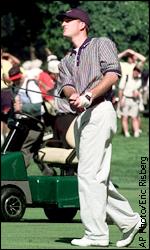 The PGA Tour fought Martin for years, saying all pro golfers must walk because uniform rules are essential for the integrity of the sport.

Accommodating Martin with a golf cart will not fundamentally change the game, Justice John Paul Stevens wrote for a 7-2 majority.

"What it can be said to do, on the other hand, is to allow Martin the chance to qualify for and compete in the athletic events (the PGA Tour) offers to those members of the public who have the skill and desire to enter," Stevens wrote.

"That is exactly what the ADA requires," he said, referring to the Americans With Disabilities Act.

"I think in the future this opens some doors for people," Martin told reporters. While the ruling may not affect other
golfers right away, he said he hopes it will benefit disabled athletes in general.

"An institution like the PGA Tour ... before they just automatically knock down someone's desire for accommodation, they might have to think twice," he said.

PGA Tour player Hal Sutton, who also is a member of the tour's policy board, said many pros have bad backs and might now apply to use a cart. Sutton himself has had back problems.

"In Casey's particular case, there's no doubt about his disability," Sutton said before a practice round for this week's Memorial Tournament. "This is not about Casey Martin. It's about the possibilities it opens up. The next person's disabilities -- it might not be as clear."

The Supreme Court's ruling will not produce any immediate changes for the elite-level PGA Tour because Martin is not playing well enough to qualify for those events. He currently plays on the Buy.com Tour where PGA Tour rules also apply.

Stevens, an avid golfer, said the walking requirement is "at best peripheral" to PGA Tour events. And in any case, Stevens wrote, if the purpose of walking is to tax golfers' stamina, Martin's disability does that for him.

Jack Nicklaus took issue with the justices' opinion that walking was not a fundamental part of the sport.

"I think we ought to take them all out and play golf," Nicklaus said. "I think they'd change their minds. I promise you, it's fundamental."

"We have believed from the beginning of this situation, however, that the issues involved go well beyond considerations involving an individual player," Finchem said.

Martin, 28, suffers from Klippel-Trenaunay-Weber Syndrome, a rare circulatory disorder that has left him with a withered right leg. He may eventually face amputation.

Martin sued in 1997 after the PGA Tour said he could not use a cart. He won in lower federal courts and has used a cart under a judge's order while the PGA appealed.

Martin said he hopes the court victory will give his game a boost.

"Shoot, I can use all the help I can get right now. It would be my wish that I can get past this," and play well enough to rejoin the PGA Tour, Martin said.

When Congress passed the 1990 anti-discrimination law for the disabled, it intended that organizations such as the PGA Tour carefully weigh the effect of their rules on the disabled, Stevens wrote. All but the court's two most conservative justices agreed with Stevens.

Justice Antonin Scalia's dissent, joined by Justice Clarence Thomas, said the majority stretched the meaning of the ADA to come up with different sets of sporting rules for the able-bodied and the disabled.

The law "mandates no such ridiculous thing," Scalia wrote.

The ADA bans discrimination against the disabled in public accommodations, including golf courses and entertainment sites. The law requires "reasonable modifications" for disabled people unless such changes would fundamentally alter the place or event.

That law applies to professional sports events when they are held at places of public accommodation, the court majority said.

Nicklaus and Arnold Palmer have said that using a cart would give Martin an advantage and undermine a basic part of the game. On Tuesday, a few other golfers echoed that sentiment.

"Walking six miles a day six days a week is part of the deal," said tour veteran, Steve Pate. "If you don't think we're a sport, then a part of my premise is gone. But I think we are.

"In sports, everybody brings their own strengths and weaknesses to the game and whoever can overcome their weaknesses and maximize their strengths is going to do well. It's maybe not fair, but I just think it's the way it should be," Pate said.

After Martin won his case in a lower federal court, he became the first PGA Tour member to use a cart in competition.