K.J. Choi's landmark victory in the Compaq Classic has triggered widespread celebration in South Korea and the champion hopes his success can inspire Korean players of the future. 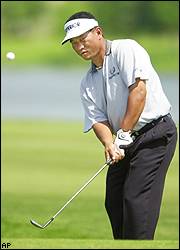 Choi, the former weighlifter who fired a closing round of 67 at the English Turn Golf and Country Club to ease to a four-stroke triumph on Sunday, became the first South Korean to win a PGA Tour title.

He also became the third native-born Asian player to claim victory on the U.S. Tour, after the Japanese duo of Isao Aoki, at the 1983 Hawaiian Open,
and Shigeki Maruyama, at last year's Greater Milwaukee Open.

"It is my and the Korean people's pleasure that you became the first Korean winner in more than 100 years of U.S. PGA Tour history by
clinching the Compaq Classic title," South Korean president Kim Dae-jung said in a statement.

"Congratulations and I hope you will continue to work to push even higher South Korea's international image and honour in the world."

"Choi's victory is a miracle. Given that most players tend to reach their peak aged between 35 and 37, his debut victory can only herald the
start of his best days," wrote South Korean golf writer Kim Jae-yul in the daily Chosun Ilbo.

The 31-year-old Choi, who became the first Korean-born player to earn his PGA Tour card in 1999, swept to victory in impressive fashion
and made key birdies to build a lead that was never in jeopardy over the last nine holes.

No player in the field could better his 3-under-par 33 down the stretch.

"This win is very special to me because, when I first came to the U.S., I had a 10-year plan laid out," said Choi, who had never previously
finished higher than fourth in a U.S. Tour event. "It's earlier than I thought it would happen, but it's part of the plan.

"I believe my victory here will influence a generation of Korean golfers to come to the U.S. and try out for the PGA Tour. In that sense, this
win is very special."

The South Korean, the son of a rice farmer, is a former powerlifter who took up golf at the age of 16.

He first visited the United States to play in the World Cup at Kiawah Island in 1997 and earned his PGA Tour playing card at the 1999
qualifying school.

"The most important thing for me then was obviously to keep my card every year so that I could have a chance to win a tournament," he
said. "It just worked out very well this week, and it came sooner than expected. Now that I have done that, I know I can win two or three times."