HUTCHINSON, Kan. -- Juli Inkster whipped the Kansas crowd
into a frenzy at every turn Sunday in the U.S. Women's Open, the
cheers becoming more deafening with every crucial putt she made. 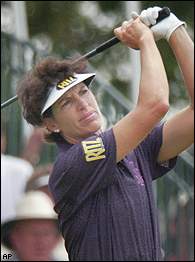 When the greatest round in her Hall of Fame career was over and
her second Open title was all but assured, she jogged up the hill
next to the 18th green, slapping hands with a gallery that was
caving in around her.

Some of them were at Prairie Dunes when Inkster, then a
20-year-old newlywed, won the first of her three consecutive U.S.
Women's Amateur titles.

Twenty-two years and two daughters later, she is just as tough,
just as tenacious and still packs a short game that ranks among the
best.

''This one was a lot tougher, but a lot more satisfying,''
Inkster said after closing with a 4-under-par 66 for a two-stroke
victory over Annika Sorenstam.

''The crowd was phenomenal, and I fed off that,'' she said. ''To
beat the best player in the world, you don't get an opportunity to
do that often. This is pretty sweet.''

Facing a two-stroke deficit against the most dominant player in
her game, Inkster won the U.S. Women's Open by matching the best
closing round by a champion in the 57-year history of the
championship.

''As far as the pressure and the conditions and what was at
stake, I'd say it's probably No. 1,'' she said of her final round.
''It is right now.''

Even more impressive is that Inkster had been struggling with
her swing all week, keeping alive her chances with grit and
determination, not to mention a putter that she needed only 25
times each of the final two rounds.

''When Juli birdied the second hole, the look on her face ... I
just knew Annika was going to have to shoot under par to win,''
playing partner Shani Waugh said.

Sorenstam, already a winner in six of her first 12 events,
finished with an even-par 70 and shot par or better all four
rounds. It wasn't enough.

''I did everything I could,'' Sorenstam said. ''I think I played
great golf. Juli played excellent. She really outplayed me. There
was nothing I could do. I gave it all, and I'm happy about that.''

Inkster finished at 276 and earned $535,000, the largest payoff
in women's golf. She now has won seven majors, the most among
active players.

Sorenstam had a 2-under 278, a score that figured to win this
Open. Her chances slipped away when she watched from the 15th tee
box as Inkster made a 15-foot par putt, then dropped a 12-footer
for birdie on 16 that rocked the prairie.

''My heart was pumping so hard,'' Inkster said.

Sorenstam followed with two consecutive bogeys, and her fading
hopes ended when she drove into the rough on No. 18.

Inkster also won the Women's Open three years ago at
Mississippi, and is the only American to win her national Open the
past eight years.

She became the second-oldest player to win a major -- Babe
Zaharias was 43 when she won the Women's Open in 1954. She also
joined Zaharias as the only women to win two majors after turning
40.

Waugh shot a 72 and finished third at 283, while Raquel Carriedo
was another stroke behind after a 66.

Sorenstam didn't wear the shiny red shoes she had on at the
Nabisco Championship when she won the first major of the year, but
she did have a few other good-luck charms.

First, Tiger Woods left a message on her cell phone. ''Keep
doing what you're doing,'' the Masters and U.S. Open champion said.
''Go out and win this thing.''

She also had a Japanese tattoo sticker on her left ankle that
said, ''Believe.''

Inkster found her inspiration from an e-mail sent by 12-year-old
daughter Hayley.

As if the Sunday pressure wasn't enough, the heat index was 104
degrees as the last two groups set out for the final round at
Prairie Dunes.

Inkster was up for the challenge. She stuffed her tee shot on
the 142-yard second hole for birdie, saved par from in front of the
green on No. 4 and then really brought the crowd to life by making
a self-deprecating prediction come true.

''As much chipping as I'm doing, sooner or later I'm going to
chip one in,'' she had said Saturday evening after saving seven
pars.

Sure enough, she chipped in from about 40 feet on No. 6. The
cheers could be heard all the way back to the sixth tee, and
Sorenstam realized she had a fight on her hands the rest of the
afternoon.

Up ahead on the par-5 seventh, Inkster rolled in a 25-foot putt
from just off the fringe. As the gallery rose in unison to watch it
drop, Inkster thrust her fist toward them, then pulled it back
toward her body.

The put Inkster at 3-under and in the lead for the first time.

Sorenstam was steady as ever, that rhythmic swing finding only
fairways and greens. She needed to be a little bit better.

Sorenstam made her first birdie on No. 7 with a 12-foot putt,
but gave back the shot -- and the lead -- by missing her first green
short on the difficult eighth hole and failing to hole a 7-foot par
putt.

She never caught Inkster the rest of the day, haunted by one
loud roar after another that rocked Prairie Dunes.

The last two came on No. 15, when Inkster hit her approach on
the 201-yard hole well left of the green, then chipped 15 feet by.
Sorenstam birdied the 14th hole, and Inkster's lead was down to
one.

The putt was pure. The reaction was chaos.

Sorenstam sat on her bag from the tee watching, then left her
tee shot in the short rough, chipped four feet by the hole and missed
the par putt.

All that was left was a walk up the 18th green and another
message for the kids.