DEARBORN, Mich. -- Stewart Ginn might finally be recognized
in the United States for the golfer he is, not for his resemblance
to Steven Spielberg. 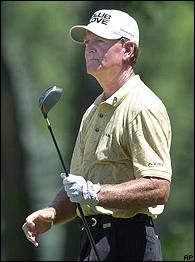 Ginn shot a 6-under 66 Sunday to win the Senior Players
Championship, the fourth and final major of the year.

The 53-year-old Australian, who joined the Senior PGA Tour in
1999 after playing professionally all over the world, finished at
14 under to win by one stroke for his first Tour victory.

Ginn, whose beard and flowing locks remind many of Spielberg,
said he just laughs when people say he looks like the famous
director.

"If it could help me get reservations or tables or get me into
movies looking like him, that's fine,'' he said while rushing to
catch a flight to his home in Malaysia. "I kind of find it quite
funny, actually.''

Has Ginn ever gained such special privileges because he looks
like Spielberg?

Jim Thorpe had the best day with a 65 and closed at 13 under
along with Hubert Green and third-round leader Mike McCullough, who
began the day one stroke ahead of Green and four ahead of Ginn.
Green shot a 70, and McCullough had a 71 during the final round.

"I knew someone was going to come out of the pack,'' Thorpe
said. "I just felt like Hubert and Mike had already used up their
big round of the weekend.''

Doug Tewell was alone in fifth at 10 under. Hale Irwin, who set
nine-hole and first-round records, finished six strokes back with
Ed Dougherty. Dave Stockton and Larry Nelson were at 8 under.

Ginn made four straight birdies from Nos. 10-13 to take the lead
for good at 14 under.

He maintained his lead with a par-saving putt at 16 after his
tee shot landed in the left rough and his second in a bunker. He
birdied 17 to take a two-shot lead over Green, McCullough and
Thorpe.

He had an accurate drive at 18, which has proven to be an
obstacle for leaders in the past, but was short on a chip shot near
the green. He needed to make a short putt for bogey, and win the
tournament.

Ginn, who was second once last year, hadn't finished better than
a tie for third this year at the Legends of Golf in April. Since
then, he's finished as low as a tie for 69th -- at the Senior PGA
Championship -- and no better than a tie for 17th.

Ginn entered the tournament with 16 career victories, mostly in
Australia and Asia.

"To win here for the first time in a major gives me a lot of
satisfaction,'' Ginn said.

Ginn, who started the day at 8 under and in the final group,
pulled within two strokes of McCullough with a birdie at 3 as
McCullough bogeyed to drop to 11 under. Ginn had consecutive
birdies at Nos. 5 and 6, but so did McCullough, who reached 13
under.

"We knew that if someone got to 15-under, they were going to
win the tournament, and that's what happened,'' McCullough said.
"Even 14 turned out to be enough because none of us could make
that last shot.''

Thorpe shot a 6-under 30 on the front nine, then a birdie at 12
gave him the lead briefly at 13 under. He parred the final six
holes. Thorpe was 15 under after his first-round 74.

Like Ginn, Pooley and Zoeller both won for the first time on the
Senior PGA Tour in a major.